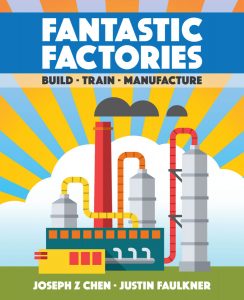 “Here. Review this,” demanded Tony. He nonchalantly handed me a copy of Fantastic Factories.

“I don’t want to talk about it. My mission was unsuccessful. Let’s leave it at that. So, I came back. I see Andrew was drunk with power. I assigned him to Euroville counting cubes. To be honest, he is probably happier there.”

Then he paused and looked at me. “Why is everyone wearing masks?”

I just took the game and ran home.

Fantastic Factories is an engine-building, dice rolling, card drafting board game for one to five gamers that want to build their own factories and produce goods for the populace. Games can take between 45 to 75 minutes.

A round consists of two phases:

The game ends the round after one of the players either builds their tenth building or produces their twelfth good. Scores are then tallied based on the number of goods produced and prestige earned for each constructed building, and the player with the most points will be crowned the maestro of manufacturing… also known as the winner.

I have some red flags for games I may want to avoid or, at a minimum, will want to heavily research. First time designer. First time publisher. Games in which the designer is also the artist. In my experience, one of these factors usually leads to a less than enjoyable game. Fantastic Factories qualified for all three of these. To say this game surpassed my expectations after playing my first game would be an understatement. After 15 games, it will remain in my permanent game collection.

Why do I so thoroughly enjoy Fantastic Factories? The engine building is fantastic. You can use your dice on your headquarters to generate resources (energy and/or metal to build buildings or cards for more building possibilities). In addition, you get a bonus for placing dice with the same value. As the game progresses, you will construct buildings that will also provide resource generating opportunities, both with and without the use of dice. The game shines because you can perform your actions in any order and as many times as you like.

For example, you can use a building to generate the resource you need to construct a building, then immediately use the building you constructed to produce additional resources. Realizing you are short resources, you could place dice on your headquarters so that you have enough resources to construct a second building. Combos like this are commonplace and exciting to pull off.

I also really liked the use of dice. As previously stated, they can be used on either your headquarters or some of the building cards to generate resources or produce goods (another way to earn points and end the game). But you are not stuck with the die result you rolled. Several buildings allow you, for a cost, to change your die roll. In addition, some buildings and contractors can provide an additional die beyond the four that every player has (some even let you set the die to the value you choose). I was very happy with the dice roll mitigation!

Card drafting is crucial for engine building. Another excellent design decision was dividing the buildings into five categories. When constructing a building or drafting a contractor, you must discard a card with the matching symbol (and pay the appropriate resources in the case of construction) before performing your action. This leads to interesting drafting decisions because you may want to draft a card that matches a symbol of a card already in your hand versus drafting the best card available. As an aside, contractors provide one-time bonuses that must be used in the round they are drafted. I spent most of my draft phases drafting blueprints, but the special abilities were tempting enough that it was not always an easy decision.

There are other little touches I really liked. Every card has a tiny box showing the number of copies in the deck and the iconography is simple and understandable. The art, while simplistic, is stylish and perfect for this game and the component quality of the dice, cards, and tokens was great.

Finally, I really appreciated the design decision to have simultaneous play during work phase, especially after all players know how to play. This really speeds up the game. There is a cost, of course, and that is that there is very little player interaction. In fact, outside of the card drafting, all your actions will take place within the confines of your manufacturing fiefdom and will not be impacted by outside influences. This game is a pure engine builder and completely embraces that fact.

Fantastic Factories is my favorite engine builder of 2020! I love how easy it is to teach, how quick it plays, especially with the simultaneous work phase, and the engaging engine building. This is a great game for both new and experienced gamers. I thoroughly enjoyed every game of Fantastic Factories I played. If this sounds like a game you would enjoy, you can pick up a copy for about $39.

If you are looking for more Fantastic Factories content, there is currently an ongoing  Kickstarter campaign for two new expansions that ends October 27th 2020.