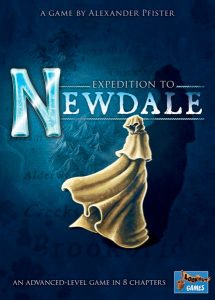 Does every game really need to have a story, a campaign, or a legacy element now? In the past few years we’ve gone from Risk: Legacy being really the only example to dozens of them coming out every month it seems. And today we are looking at the second campaign-style game from Alexander Pfister to be released in the past few months alone.

Expedition to Newdale takes the engine building and press your luck of the criminally underrated Oh My Goods! and inserts it into a larger worker placement game. Complete with eight chapters that give you a story and gameplay changes as you progress throughout.

In Expedition to Newdale, you’ll begin the game with two workers, a coal mine with some coal, and a hand of cards. You can place your workers on your mine (or any buildings you build later) to generate resources—giving you more money to spend. Or you can place them on a central board to take the associated actions.

Each building card represents a different type of resource. Every resource you have on one of your cards is money you can spend. There are also several assistants required for you to work in that building. Each round you’ll draw an event card to set the number of assistants in the labor market. Of course, each event may trigger some other game-changing things as well.

Your coal mine, for instance, requires two yellow and two red assistants to run. You can place your worker in one of three placements spots for each building. Some spots will give you a “discount” of say, one assistant, but will generate fewer goods. Or, if you are feeling especially lucky, you can work harder, requiring more assistants, but generate extra resources.

Once all workers are set, four more assistants are drawn from the bag to make up the total labor market. This, generally, is the fun of Expedition to Newdale (and Oh My Goods! for that matter). There is a bit of a press your luck element when assigning the workers as you are operating on less than perfect information. If you turn up short on assistants, you can either forego the action and draw a card or discard three cards from your hand for each assistant you are short to force the building to produce.

Each building also can generate resources by chaining other goods or cards from your hand. Like Oh My Goods! you’ll want to try to build some type of engine to chain cheaper goods into better ones. You can build a flour mill and a bakery, for instance, to turn your flour into very valuable bread. Chaining together gives you bonus goods as well, making it the most efficient method for getting more money.

When you build a new building you also get to place a house on the map of Longsdale. Each building you place can score you additional victory points, award you bonus tiles, give you a discount for the building cost, or help fulfill a secret objective. While the map board seems a bit superfluous, it really adds another layer of decision making as you try to build an effective engine.

This continues for seven rounds and then the game ends and victory points are totaled. But, of course, Expedition to Newdale is a campaign game of sorts. Each chapter can be played independently, but the game really works best starting at the beginning as there are a short introduction and epilogue to each game and minor mechanical changes throughout.

Let’s start by taking a deeper dive into the campaign aspects of Expedition. The story is a bit…well, of a rip-off. It involves a king, a rebellion in the North, and some Ice Giants. If you are looking for a solid bit of immersive storytelling, this really isn’t it. The campaign is really about how the game changes mechanically throughout.

As you progress through the chapters, you’ll get new building types, new character cards, and even new maps that introduce additional worker placement spots. Largely your actions in one game don’t carry over to the next (although the story does briefly branch in one spot). But every chapter does provide a unique scoring card that gives you so bonus points for delivering the types of goods that round that the story is focused on.

What the campaign does perfectly is it gives you a reason to get the game back to the table repeatedly. And the game itself is worth it. It takes the press your luck of the Oh My Goods! card game and adds so much more around it, yet it still works together perfectly. The primary focus is still building an engine that can chain cards and resources into even more resources, allowing you to build even more buildings.

And just like the card game version you can still choose to work sloppily, or carefully, in order to produce more goods. When you build a new production building you also must choose where on your player board to place it. There are a few spots on your board with different modifications to the number of assistants needed. One will produce one good with 2 fewer assistants than required, for instance, which can be useful for some of the more expensive buildings that are hard to activate.

Not every building card is a production building though. You can build post offices that grant you additional assistants to help run your buildings. There is also an element in Expedition to Newdale of building a military force. Some buildings give you military power which will score additional points for the player who has the most by the end of the game.

And then, once you’ve decided where to place the card in your player board you must choose where on the map to place your building. If you place it in a space adjacent to an existing building, you can claim a bonus tile that will give you a powerful one-time-use ability. But maybe you want to move farther away to claim a spot worth additional victory points. As you start using the later maps there will be additional worker placement spots to unlock once you’ve reached a particular city on the map.

Of course, you have all the worker placement areas on the mainboard. These allow you to unlock more workers, draw additional cards, or produce additional goods without the risk of needing assistants. The game can hinge a bit upon the luck of drawing building cards that work well together. These actions help balance that out by letting you cycle through your cards to find a better combination or scoring points in other ways.

Expedition to Newdale is exactly what a eurogame with a campaign should be. The game itself is great—interesting choices from worker placement, how risky to be when trying to run buildings, and optimizing your actions through the game’s seven rounds. Overall it’s a big upgrade from Oh My Goods! which was already a game I enjoyed immensely!

The story is the glue that holds the changing mechanisms together. Each chapter in Expedition to Newdale will give you a new goal to focus on. Possibly a different map with new benefits or worker placement spots to consider. New characters with special powers to factor in. I’ve completed the game’s eight chapters, and never did we play just one in a sitting. In part, that’s because the game is pretty fast, and we wanted to try again to build an even better engine. But also, we wanted to see what twists were about to be introduced. HBO may not be calling to option this story into a TV series anytime soon, but that’s not the star of the show.

Hits:
• The campaign changes just enough from game to game to keep you coming back.
• Every turn is full of multiple things to consider for each action.
• A great blend of worker placement and press your luck mechanisms.

Misses:
• Story is a bit lackluster.
• A fair amount of luck in card draws can influence outcome.