We review Exodus Fleet, a resource management and auction game published by Tasty Minstrel Games. In Exodus Fleet, each player controls a fleet of ships trying to escape a failing Earth in search of a new home. 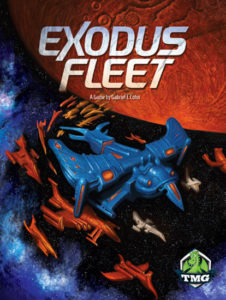 Futuristic space themes and science fiction in general, usually tell stories about possibilities. These stories are a reflection of our current selves and how we view the present and mankind’s purpose. TV shows such as Battlestar Galactica (in its original 1980s broadcast) used the myth of people traveling to a distant planet as a metaphor for mankind’s journey through history, hoping that eventually they reach the promise of the future.

While some games might adopt the theme, they don’t necessarily have to involve themselves in the story. There’s always another point of view. In this case, Exodus Fleet is a game about a group of ships fleeing one planet in search of another. Along the way, through resource management, some light card play, and quick auctions for priority in actions, players attempt to gain points representing the reputation and success of their fleet as well as the number of passengers taken aboard.

Exodus Fleet takes 30 minutes per player and plays with 2 to 4 players. Three players is ideal, but four is possible if players have the time.

Each player in Exodus Fleet is allied with a certain Faction at the beginning of the game. This gives the player a starting command ship and a starting exploration card. This also determines the player’s starting income of money.

Rounds of play in Exodus Fleet give each player a chance to choose an action. Once chosen, all players will get to bid money on turn order for taking the action. Usually this results in a more advantageous action result, but in all cases, the player choosing the action, the “Admiral”, gets a bonus.

The five possible actions are:

As each player chooses an action, the bid starts from the player’s left and goes once around the table with public bids. The highest bidder gets to take the action first and usually has more choices or more advantageous acquisition of resources.

After a set number of rounds based on the number of players, a first scoring is held. The second and final scoring occurs at the end of the game. Points are primarily awarded for having ships of the same faction (5 different factions in the deck), transporting passengers (purple spaces on ship cards), and any other bonuses from Neutral ships.

Exodus Fleet is a solid game but with issues. What is mostly seen during play is that the game flows relatively smoothly, some decisions are really interesting, but most of all, there is a lot of management. That doesn’t mean it’s a bad game, but that it requires some effort and forgiveness to enjoy fully.

Although there are only four resources in the game (five if counting the money cards), there’s a lot of spending and moving little cubes around on cards to make sure that each card does not have too many resources. Since a player’s stock of resources is limited by the space each ship has, players are often moving and analyzing their cubes to make sure they can spend what they need. This is a bit tiresome and AP prone players could be disrupted with this extra nuisance.

In addition, the planets and ships available rotate through play as players mine resources and build ships. The card row of ships changes often and the abilities of the ships are written in tiny text on the cards. This makes analyzing anything at a glance really difficult.

However, despite some of these heuristic complaints, there are challenging decisions. Knowing when to take which action is definitely interesting. On top of that, knowing what amount to bid to minimize income actions was also interesting. However the auctions allow players to underbid and still get something. This means the power of a high bid is lessened and defeats some of a money hoarding strategy since players with even a little money can usually get something. They can even come out ahead if they don’t need to go first with each action.

What really hampers the game overall is that each player starts with a Faction and usually wants to build more ships of that Faction to gain points. However, the distribution of cards could be that other Factions are revealed more or their resources come up more often. If a player tries to be flexible from the beginning, they could still only gain a mild number of points. If a player’s strategy focuses on a single Faction that will likely result in a potential for limited points. There is a strong element of luck and timing of actions that might benefit some players.

The gameplay in Exodus Fleet is interesting and engaging, but it’s not so strong that it overcomes weaknesses for long term enjoyment. The heuristic issues with cards and the range of luck influencing the game is complicated even further with demands of managing a lot of cubes physically on cards. The kind of game it demands can be engaging, but not consistently. Generally, Exodus Fleet is a game that is enjoyable a couple of times. Afterwards, games with less demands on the player and more moments of engagement will be certainly eclipse this title.

Final Score: 3 Stars – While the gameplay itself can be engaging in sporadic moments, the management and ease of play hampers the whole package.