We review Exit: Forgotten Island, the newest escape room board game in the EXIT series. This EXIT game focuses around players trying to escape from the Forgotten Island and we provide our spoiler free review. 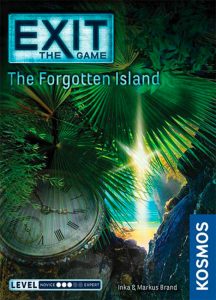 Ask any movie executive what they would want most, chances are you’ll get the same answer. They want to know what ideas will turn into hit movies and which won’t. And further, once they have a hit concept, they want to know how much they’ll be able to invest in that idea before the audience gets lured away by the next shiny thing.

We might be at that point with the Escape Room genre. Kosmos’ latest round of EXIT: The Game (EXIT) titles seek to get an answer to that question. For tonight’s enjoyment, this reviewer is taking a look at EXIT: The Forgotten Island, designed, like others in the series by the cutest game design couple ever… Inka and Markus Brand.

This cooperative, puzzle-solving, family-friendly opus takes at most 90 minutes to play. The most crack team of puzzle solvers could do it in 45 minutes (if it’s any less than that, send me your number so I can phone you for hints on future games). This one, in particular, works best with 3 or more players.

Like others in the EXIT series, players will open a box and carefully follow instructions on what packets to open and when. Having not played all of these titles, many include a code wheel which requires players to deduce a 3 numbered/symbolized code to move from puzzle to puzzle. Hints will be given and an electronic app can track your time and provide atmospheric sounds. For a deeper gameplay overview, check out our first review of the Exit series.

Without giving too much of the inner workings of these games away, the theme included here has players searching for a way off a deserted island.

Each EXIT game rates itself for difficulty and the rating of “Average” here seems spot on. Most of the puzzles for the playtest group were not very hard, but for a new group who has never experienced the Inka and Markus Brand of puzzles (sorry, couldn’t resist), these will be challenging. All in all, it delivers a good dose of brain burn for a group that loves escape rooms or other “puzzle solving in a box” team efforts.

Having played almost all of the escape room style of titles, this reviewer can fairly say that the EXIT games aim to be the ones that are most interested in throwing gamers curveballs. One of the signature puzzles here demands outside-the-box thinking. That is no cliche. Players should expect that any of the components or packaging of the game comes in to use when solving puzzles.

While that does provide a nice twist, used too much, just like the code wheel, and these titles feel repetitive. Having recently read an article about the best strategies to solve an escape room, once you see some of the workings of the man behind the mirror, the challenge loses luster. As it is, The Forgotten Island is good, but it employs such tried and true puzzles that it begs the question whether the genre as a whole is waning. For oversaturation, even if the games themselves are solid, this effort gets a minor ding.

The EXIT: The Game series delivers once again with an expectantly challenging set of puzzles. However, EXIT: The Forgotten Island is aimed more for the experienced but not overly experienced room-escapers. The included hints and puzzles feel like one of the closest replications of escape rooms while still being approachable and fun for more intense gamers.

Final Score: 4 Stars – Fans of escape rooms looking for yet another challenge, The Forgotten Island fits right in line with expectations.

Hits:
• Great selection of puzzles
• Easily engages a group with a variety of tasks
• Components and app tutorial