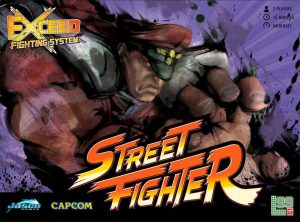 Readers who were alive in the early 1990s and happened to stop in at the local arcade (the brilliant yet near-twilight age of standup video games), couldn’t help but see gaggles of fans encircled around Street Fighter II. More than any other game, Street Fighter II invented an entire genre of video games. You can talk about other games that came before it, but Street Fighter codified many tropes still used in fighting games.

Does a translation of that experience make for a good board or card game?

EXCEED: Street Fighter brings the penultimate fighting franchise to the EXCEED system. It’s for two players to FIGHT! and takes about 20-30 minutes per FIGHT!

Players in EXCEED: Street Fighter will alternate turns taking actions to play and/or draw cards. Fighters will face off on a linear path with character cards that represent the fighter’s position on the fighting line.

Action cards for each player come from a special deck just for that character. There are some cards that are common to each deck, but the most powerful ones are specific to the character and usually work best as a combo with other cards.

There are 3 basic card types in each deck: normal attack, special attack, and ultra attack. Each card has stats for how effective the attack is. The stats are:

There are additional options in the game for powering up attacks over time with “gauge”, modifying attacks with “force”, movement options when switching sides with an opponent, and the EXCEED action to energize into a more powerful character mode.

The ultimate goal of the game is to reduce your opponent’s life total from 30 to 0.

What’s immediately apparent when learning the EXCEED system and the Street Fighter version in general is that there are A LOT of options when playing cards. Much more than any game in this reviewer’s recent memory. Even when compared to games with multi-use cards, EXCEED: Street Fighter gives a player a lot of options with each turn. In addition, big turns can deplete a hand quickly, so taking a turn or two to restock a hand and hopefully stave off attacks is a key tactic to learn.

There is also a lot to experiment with here. With multiple plays, even with the same character, players will start to scratch the surface of combos and setups for different attacks that make the system remarkably deep. Experienced Street Fighter video game players have sometimes described play like a game of chess. This is definitely that feeling, albeit slower.

The one knot here is the introduction of randomness from card decks and the luck of the draw. A fight really should be won by the player who manages to time everything just right, but sometimes the cards drawn just won’t allow it. Players can always rely on two out of three games to settle a match, but it does feel like there’s just enough randomness to deter some fans.

What deters this reviewer more from giving a higher score is the level of complexity. The game is so robust and so deep that the energy level and action-oriented fun of a fighting game is really lost. The tension of the fight can still be there if players are equally matched in skill and card options, but pure fun of smackdown is lost unless players get animated and enjoy throwing cards onto the table.

Losing none of the complexity of fighting games but much of the action, EXCEED: Street Fighter will certainly appeal to those who enjoy the technical challenge of a fighting game. Those who prefer the visceral energy will find a play style like this overwhelming due to the number of tactical choices. Sometimes a good fight is based on instinctive choices and unless players force timed turns, that tension could be lost. And it’s perfectly understandable that in this tradeoff of simplicity with high energy vs complexity and a slower game that the publisher opts for the latter.

Final Score: 4 Stars – An excellent implementation of fighting game options, but it fails to capture the speed and tension of the genre.

Misses:
• Some randomness
• Doesn’t have the “energy” of the video game