We review Ex Libris, a worker placement and set collection board game published by Renegade Games Studios. In Ex Libris, players control gnomes in charge of collecting and organizing books in their libraries. 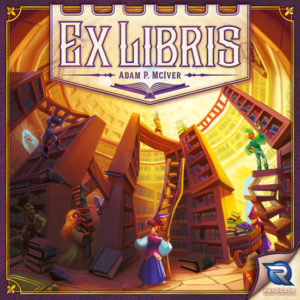 If your house is overflowing with as many books as you have board games, then Ex Libris definitely needs to be an addition to your shelves. In Ex Libris, you are a book collector competing to become the town’s Grand Librarian by sending your workers out to gather rare and valuable books. You’ll be judged by the Mayor’s Official Inspector on criteria ranging from alphabetizing to shelf stability and variety. Can you and your gnome assistants assemble the greatest library?

Ex Libris is a card collection and worker placement game for 1-4 players that takes about 45 minutes to play. It plays best with 3-4 players.

In Ex Libris, you are attempting to collect book cards and assemble them into rows that both stack above each other and are arranged in alphabetical order. At the start of the game, each player chooses a library tile. These tiles provide a unique assistant for each player as well as two workers.

At the games end, books will be scored according to how they were shelved and how many of each type you collected. Variety is key, as is book arrangement and paying attention to categorical bonuses. Most points wins the title of Grand Librarian (and the game.)

My game room somewhat resembles a used bookstore (games and books on every surface, smelling of paper and coffee and lots of windows with dust motes floating in the light). As such, every single gamer I know recommended this game to me on its release. I held out for about six weeks until I saw it in person at my FLGS. The art is bright and fantastical, and the box itself is designed to look like a book with a dark purple title spine on one side and what looks like page leaves around the others. (This would look BRILLIANT if you shelve on box ends.)

Reading through the rulebook and learning to play was a snap. At its heart, this is purely set collection and worker placement so the mechanics are familiar. What makes it interesting is the variability – there are a dozen starter libraries and eighteen locations, only a few of which will see play each time. I’ve played several times now and haven’t played the same starter twice yet, nor have the locations wound up being the same. I do wish the text on the tiles was somewhat larger though. Eventually, familiarity will solve this, but right now we tend to pass them around the table so everyone can read them.

There’s a certain strategy to setting up your shelves in order to get the best arrangement of books. Collecting your special type while avoiding the banned books, all while being sure to get a good mix of the other categories, as well as getting all the books properly on your shelves is the heart of Ex Libris. Fortunately, I found the method of acquiring cards usually gives even those who might sometime over-analyze this sort of thing plenty of time to get their cards in order without disrupting play.

The gnome and assistant meeple are adorable, ranging from a shiny meeple robot to a tiny meeple wizard. And I’m in love with the score sheet – the “Official Librarian License Application” that resembles a clipboard but is entirely dry erase. Kudos to Renegade for not including a multi-sheet, forest killing scorepad.

If you’re remotely bookish, a collector and organizer, or just like worker placements Ex Libris is right up your alley. Great theme and art draw you in and gameplay delivers. Simple, familiar mechanics will get your game group up and playing quickly the first time, but tile variability keeps this from being relegated to the bottom shelf after a few plays.

Additionally, all the unique locations and libraries feel well-balanced. The only drawback I found in Ex Libris was the size of the font on the tiles – until you know them by artwork you’ll likely have to pass them around the table for everyone to read.

Final Score: 4.5 Stars – A great game that blends some familiar mechanics with an interesting theme and solid production values.