We review Evolution: Climate, the sequel to 2014's Evolution. Keeping the ruleset largely in line with the spirit of the original, Northstar Games has added the climate track to give players a new challenge to their survival. Has the sequel adapted enough to surpass the original or is the series destined to be out evolved in the arms race of hobby gaming? 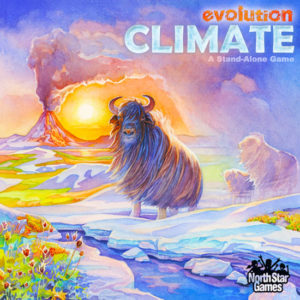 This landscape was once lush with plant life. Even on the driest days, the moist ground would wet both foot and claw and white capped waves would rage through this valley in a torrent that would both refresh and replenish even as their flow was stemmed. Small groups of fledgling mammalian communities would scurry in the moonlight, only perceptible beneath the towering blades of grass to the most intelligent of the larger bodied nocturnal hunters. That was before.

In Evolution: Climate, millennia of environmental and evolutionary events can pass between the chips and pizza on Saturday game night. Evolution: Climate is a hand management, engine building game published by North Star Games. It plays two to six people and takes about an hour to play. Although it scales excellently for all player counts it feels right-sized with three to four.

A sequel to 2014’s Evolution, Evolution: Climate expands on what worked for the original game and adds the player influenced, but ultimately even-handed, climate factor. It comes as a standalone version and as a Climate Conversion Kit for the original game. Throughout the game, players play cards from their hand to change the climate, determine how bountiful the food resources are, and create, grow (in size and population), and adapt different species. All the while, players are fending off predation by other species and decimation by natural events through adaptation and tactical card playing. This co-evolutionary fencing match is won by collecting the most food tokens by the end of the draw deck.

As with the rest of the series, the artwork of Evolution: Climate raises the bar in the industry, with the watercolors that adorn every card and board in the game being notably vibrant and frameable pieces (the climate track landscape is of particular note). The artist, Catherine Hamilton has defined the series with her talent.  Similarly, Ben Goldman and Jacoby O’Connor are responsible for the clear graphic design that makes this game so easy to teach and learn. The fan-favorite component in Evolution: Climate, however, isn’t the mantelpiece worthy artwork, the cleverly organized species boards, or the clear and concise graphic design, but the first player marker – a four-inch-tall, green, wooden sauropod. Is it unnecessary? Sure. Is it awesome? Absolutely.

The game is set up with the climate board out in front of players with the watering hole and the excess food tokens nearby. A climate event card is then revealed and placed in the appropriate climatic zone (e.g. temperate, cool, and scorching).

At the beginning of each round, cards are dealt to players who must spend cards to add food to the communal watering hole, vote on a climate movement (discussed below), and increase or decrease species body sizes or populations. These same cards are used to give species different traits (e.g. burrowing, carnivore, climbing, fat tissue). A species can have at most 4 traits.

At the end of the round climate, climate events, food supply, and feeding is resolved. Carnivores never eat from the watering hole and must eat other species to survive. Hungry animals die at the end of the round and the whole thing starts over again. The game initiates the last round when the draw deck is emptied and the winner is the player whose species have eaten the most food.

The Evolution series does a fantastic job of creating varied and complex card interaction with relatively few unique cards and Climate does not stray from the pack. The game remains new and fresh through multiple playthroughs – with 23 different trait cards and each species allowed up to 4 traits (including the 6 different body sizes), there are 65,412 different species possible. A few of these trait cards (i.e. Symbiosis, Warning Call, Cooperation) interact with the species to the left and right of the species with the trait, which makes for even further variation and engine building.

Perhaps most interesting about this game is watching species evolve in size and ability throughout the game. In several of our games, those species geared towards being small and scavenging in the beginning of the game are vastly different by the end (if they even survive that long). Using the right combination of offensive and defensive traits is key to surviving (the potential meanness of) opponents and the climate swings of the climate track.

The Modify Environment phase, where the climate tracker is moved, is the biggest change to the series. This is where the “climate” comes into play. As mentioned above, at the start of this phase, the “food cards” are revealed and the climate icons are totaled. To allow players a semblance of control, the icons function as a voting system and the greater number of icons (snowflake or sun) moves the climate tracker one step in that direction. If the marker ends on an event card, that card is resolved. These events are always bad things that tend to result in dead animals and some form of famine. Additionally, certain zones near the ends of the climate track will kill off animals of certain sizes.

For all of the potential frustration it can introduce, the climate track is a great addition to the Evolution series. The track is basically moved by a secret ballot system where players discard trait cards which display a certain number of snowflakes (cold votes) or suns (heat votes). The key here is that players continue to play cards and adapt or otherwise increase (in size or population) their species before the climate result is revealed.

As the climate enters different zones on the track, it can trigger event cards, decrease the populations of species with specific sizes, and reduce the available food in the watering hole. There was enough of an evolutionary arms race between players in the original game, but with the introduction of this climate track, players are now fighting against and adapting to the game itself. This additional mechanism to contend with can sweep most of the species off of the table if players are not varying their card play and, on top of the potential of a carnivore heavy opponent, can make for some frustration in thinner skinned (or younger) players.

Unfortunately, the one downside I see for the voting system is that if players play cautiously (purposely or subconsciously), they could stagnate the climate track and remove the potential for ill-effects. An occasional random driver for this would be nice to keep things moving.

Ultimately, the simple ruleset of Evolution: Climate makes it easy to learn and play, which makes sense for a game that has been so praised for its educational potential. Unlike other educational games, this is one that I would (and have) pulled out several times. Aside from my obvious bias for the theme, the card interaction and reaction at the heart of this game and the call and response of the species and the climate track makes this a unique card game unlike any other at the table.

Although Evolution: Climate has yet to be mentioned in the science journal Nature (as the original had been), the Climate mechanism adds another layer of simulation that, in hindsight, the evolutionary modeling of the original now feels like it was missing.

Beyond the sheer theming aspect of the mechanism, the nature of the feeding in the game can leave some players feeling bullied, but the blind voting of the climate track can help those players in the rear of the pack mitigate the populations of potential runaway players. It is an elegant solution to the problem that fits the intent of the original well.

Additionally, regardless of the number of playthroughs, the game is able to feel fresh each time it hits the table thanks to the vast array of card interactions that are possible. Ultimately, Evolution: Climate is an overwhelming “Yes” from me regardless of whether you already own the original or are new to the series.

If you’d like to get a copy of Evolution: Climate, you can get it for about $60.

Final Score: 4.5 Stars – A great Game that not only looks beautiful, but feels fresh each time I play it.

Hits:
• Component quality is great
• The climate track is an excellent upgrade to the original
• Scales very well for all player counts

My college education and graduate research focused on evolution, geology, and palaeoenvironmental reconstruction, so this game’s theme is truly a passion for me. Those of you interested in some more on the subject might like to check out Stephen Jay Gould or Richard Dawkins. Truth be told, the former is more accessible (and far less incendiary) than the latter.

In the meantime, here is a fun thought experiment. To paraphrase (and likely butcher) one of my favorite sections from Richard Dawkins’s most accessible book River Out of Eden; you are the success of an innumerable amount of successful individuals and creatures that can be traced to the very first single celled organism – the very first puddle of primordial ooze. Tragedy did not strike before the birth of one of your direct ancestors in your entire line – no Looney Tunes-esque falls off of a cliff and no major predation events would impact what would become your family.

It is perhaps an obvious point, but also very endearing. Look at the five major extinction events that would decimate so much of the world’s populations, the ice ages that would freeze great behemoths in time, the plagues (and pandemics) that would spiral the globe – none of these stopped your ancestors from driving on, and ultimately, you from being. Now isn’t that nice?