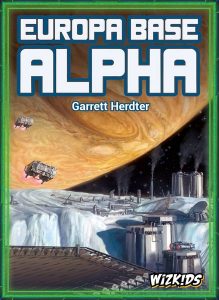 Why would anyone ever travel to Europa? Maybe I was the only one paying attention when everyone was told “All these worlds are yours, except Europa. Attempt no landing there.” Either way, with its water-ice crust and the possibility of a liquid ocean underneath, Europa has served as inspiration for science-fiction stories for ages.

In Europa Base Alpha, you are tasked with building up the surface of Europa with the most installations, because nothing says human nature like going into a pristine untouched environment and gunking it up. I digress…

In Europa Base Alpha, play is driven by cards that can serve a variety of roles. A card can be played as an installation that needs to be built, so long as the proper dice results show up when a player rolls. Cards may also be played to negatively impact other players’ rolls, or to boost their own rolls. In addition to that, cards can be played as events that affect a players’ rolls on future turns.

In a round, players first pick a card to serve as their installation to construct, then play cards to undermine other players and try to prevent their construction from succeeding. Rolling the dice takes place simultaneously, with each player rolling dice in their pool up to three times. The goal is to have the dice faces match up with the construction requirements of the installation, with the use of wilds counting for negative points. If a player is successful, they may push their luck and try to build another installation, but if the player fails, they score no points for that round. Players may then play cards to affect future turns.

After a round, new cards are drawn and play repeats a number of rounds based on player count. At the end of the game, whoever has the most points from constructed installations is declared the winner!

A push-your-luck dice-roller with a sci-fi theme? That combination of mechanics and theme was a guaranteed attention-getter for me when checking out Europa Base Alpha. The prospect of building up a series of bases on Europa ignited my imagination. Unfortunately, what promised to be a great theme ended up receding into the background—the only thing that barely supported it was the names of the bases (which were weak, at best) and the sci-fi-ish die faces. The lack of clever names for the different card effects or anything else left us wanting.

It is eminently possible to have a game with a pasted-on theme that is still a load of fun (I’m looking at you, Castles of Burgundy) but Europa Base Alpha does not succeed in this regard. Yes, chucking dice is a blast, but the game becomes un-fun very rapidly due to some serious mechanical issues. Push-your-luck games work when players have a good number of turns to mitigate the risk of pushing versus playing it safe. When playing a game with three players, there are only three game rounds, making a failure to score any number of points in a round almost insurmountably detrimental.

It is indeed possible to have that kind of punishing push-your-luck mechanic and just to play it safe for the entire game. However, when that is combined with the take-that aspects of playing cards to undermine your opponents, it is possible to end a game failing to score any points at all. Europa Base Alpha suffers from the pile-on-the-leader mess that all take-that games have, but the problem comes back to a simple matter of time. There just simply is not enough game to be able to overcome a bad beat, and the game is not terribly interesting or compelling (or fast) enough to warrant multiple plays. It’s just a perfect storm of bad mechanics that add up.

All of that is not to say that Europa Base Alpha doesn’t try to do some innovative things. We are suckers for games where cards can be played for various effects, and Europa Base Alpha gives players a multitude of options as to how they want to deploy their cards for the various powers. We specifically enjoyed the prospect of playing a card for a power to be used in later turns, with the hopes of stringing together a powerful combo for that last turn. There’s design space for some interesting things here, but we are not sure that the game takes full advantage of it.

Europa Base Alpha promises fun dice-throwing action with a neat sci-fi setting and theme. Unfortunately, all you end up with is some dice-throwing. There are plenty of other dice games that can satisfy your itch for a push-your-luck Yahtzee-style mechanic. You might have better luck with one of those.

Final Score: 1.5 Stars – The theme is fun, but this one has trouble achieving orbit. This is an extremely generous score.

Misses:
• Sci-fi theme could be great but feels 100% pasted on.
• Take-that mechanism is detrimental to gameplay.
• No way to catch up in the event of a failure in a round.