We review Ethnos, the set collection and area control board game published by CMON Games. Ethnos puts a fantasy spin on the area control mechanic as each player is recruiting bands of fantasy monsters ton control the world of Ethnos. 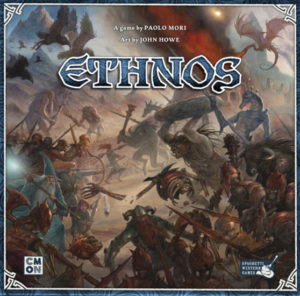 Each game has a personality. Like getting to know someone, when choosing a game, there are things that may be instant attractors and then aspects which, once experienced, become real annoyances. CMON has presented a set collection and area control game filled with this dichotomy.

Ethnos is for 2-6 players and takes about 60-90 minutes to play. It plays best with at least 3 players.

Each player in the land of Ethnos leads tribes of creatures ascending to dominance. To win, players acquire victory points by maintaining control over land areas, having large bands of warriors, and collecting various racial bonus points.

Each card in the game has two features: race and color. Players holding a hand of cards have two choices on their turn: play a set of cards (called a band) or take a card from the display or the deck.

A band of cards is a collection which shares the same color or the same race (like a suit). When a band is played, the player decides which creature in the set will be the leader. That card determines any special powers the player can use and the location for an area control token.

If the band has more cards than the number of tokens for the player in the color region, the player may place an additional token, thus gaining more control. Certain races allow for different rules when placing the control token and optional ways to score points. For example, each color of Orc leader played as the leader of the band allows the player to place a token on their own personal “Orc Board”. When the deck runs out, players can score points based on how many colors they’ve acquired.

After playing a band, any cards remaining in a player’s hand go to the display row for other players to pick. This keeps players from holding on to valuable cards throughout the game.

Before Ethnos even hit the table, a keen-eyed user on BoardGameGeek noticed something. The outer borders of the land of Ethnos is the exact outline of the country Slovakia. This isn’t a casual coincidence. The outline is almost exact. The graphic designer must have used the outline as a shortcut to create the island realm. Despite the efficiency of this method, the image has stuck in my head. This reviewer certainly feels that despite the efficiency, it distracts from play. It takes gamers out of a mythical world and reminds them of our own too much.

The second big miss that is hard to overlook are the stacking control markers. Plastic doesn’t seem like it should be “slippery”, but keeping a stack of markers together was a feat to admire. In addition, stacking the markers so that they fit back in the box insert was an additional challenge. Add to this the horrendous bright colors that do not mesh with the theme and gamers are left scratching their heads.

Those who can easily overlook these issues will certainly see deep and interesting gameplay. There are lots of tactical choices every round building upon strategic decisions. This is a superb example of light but challenging play.

Another thing that Ethnos also pulls off well is variety of setup. Each territory players wish to control has a varying number of victory points for each Age. Some ages deserve attention early, while some are only useful late-game. This ties in well with the strategy, as players will need to balance early and late objectives. Add to this the randomization of creatures in the game and there’s plenty to feast on for quite a while.

This strategic element is coupled with some interesting, if somewhat plain, race powers. There’s a good mix of abilities, none of which appear to be game breaking. This goes a long way to keeping each play of Ethnos fresh.

Even after all those positives, the resulting production still feels unpolished. A lot could have been done in terms of more refined production values to spice this offering up and raise gamers hopes for future CMON games.

Despite the praise for its gameplay, this reviewer is going to conscientiously pass on plays of Ethnos in the future. The game is certainly engaging, and it fills a niche like a pseudo Ticket to Ride for fantasy wargamers. While that does sound exciting, the issues with the board and the pieces in Ethnos are too distracting.

Final Score: 3.5 Stars – While Ethnos is entertaining, challenging, and can be filled with tension, the overall production aesthetic drags it down.

Misses:
• Ethnos is a map of Slovakia
• Difficult to use and ugly control markers