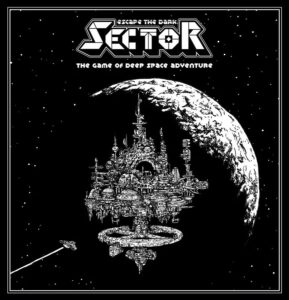 Story and theme in board games is something that some people look over. In Escape the Dark Castle, a fantasy story-driven game, we saw a new, simpler take on adventure games. Instead of a complex set of rules for various character or world mechanisms, Escape the Dark Castle focused on the players desperately trying to survive each encounter.  Now, publisher Themeborn is back with their second installment, Escape the Dark Sector, a similar game with a sci-fi theme.

Instead of a castle, players are now in a space station, in which they are imprisoned. Like the previous game, this is a story game, similar to a Choose Your Own Adventure book. The goal is for the players to reach their ship, the Equinox, by surviving a series of encounters. This cooperative game supports 1-4 players and is 20-60 minutes long.

Escape the Dark Sector plays over a series of chapter cards. Each card has an encounter on it, and the players must decide who will flip each card. The player who flips the card will be the primary target for the main effect of the encounter.

At the start of the game, the players assemble the chapter deck, with 1 boss card, 4 of each of the act cards (3 different difficulties), and 1 start card. These cards are ordered in such a way that the game will get progressively harder and harder as the players advance.

Also, each player will pick a character and take the character’s corresponding crew die. Each player’s crew die is different, making some characters better at certain checks than others. This is important because each player will have to roll their die to resolve checks in various encounters.

Along the way, players will gather loot cards. These are usually helpful items such as weapons, healing devices, and other objects that can be used throughout the game. However, each character can only hold four items, and some count for two slots instead of one. Players will need to decide which to keep and which to drop.

Combat occurs when a chapter card instructs players to do so or when players have the option to start a fight. In combat, players have the choice to engage in one of two ways: ranged or close combat.

To begin, players will assemble chapter dice to represent the health of the enemy. Then players collect the dice for the type of weapon they are using which should match the type of combat chosen. In ranged combat, players roll ammo dice equal to the fire rate of their weapon. Different weapons will use different types of ammo dice, and some enemies are weaker to certain types. In close combat, players will roll their crew die and remove a chapter die from the enemy’s health matching the same symbol that they rolled on their crew die.

If players survive 13 chapter cards, they then face the boss card. This is a much more difficult combat encounter. Five bosses are included in the game and each has a special perk that changes the way combat works. For example, the players might be forced to only use explosive weapons or be required to only engage in close combat for the encounter.

The players win if all of the chapter cards are completed, and they reach The Equinox. However, if even one player dies, the game ends and all the players lose. This game is all about budgeting your health to make sure you can survive each and every card. Strategizing who draws each card is a good idea because the player who draws the card usually takes the most damage.

Escape the Dark Sector is a good adventure game. With two types of combat, the gameplay is engaging with decisions to make such as being able to choose your type of combat and what weapon to use. With so much combat in the game, it’s important that this is well-polished and a good mechanism.

Throughout the game, players will come across a variety of items that engage them and make them want to play and discover more. The art in this game is great and supports the sci-fi theme very well. The component quality is very nice, and the graph used as health counters really solidifies the theme.

However, the gameplay outside of combat is extremely simple. Decisions made on the cards usually involve a quick die roll or whether or not to fight an enemy. This makes the overall gameplay easy to pick up, but might not satisfy people who want less downtime and more complex and engaging gameplay.

One issue though is that the rules might come across wrong when players read them for the first time. Some of the combat mechanisms are a bit messy in the rulebook. Specifically, the range and close combat sections are not organized in a way that supports looking up a specific rule for combat. With special situations like flanking and having to learn two different sets of rules for both types of combat, questions will come up quickly.

Another negative point is that some of the cards in the game are extremely similar. When playing multiple times, it was often difficult to tell if we had already used that same card before. Overall this makes the game feel repetitive even if players actually experience different encounters.

Escape the Dark Sector is a good game, but it can be repetitive and hard to understand sometimes. If you really enjoyed playing Escape the Dark Castle, then this game might be for you, but if this is your first time with either of these games, the fantasy version is easier to engage.

Final Score: 2.5 stars – Escape the Dark Sector is a good game, but issues with replay value and hard to understand rules make for a less fun escape.