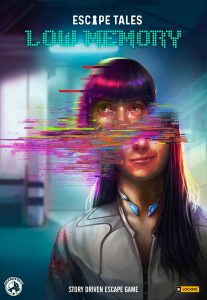 It’s been quite a while since I’ve spent any time with a tabletop escape room game. Every since Unlock and EXIT took the genre by storm in 2017, escape room games seem to have slowly settled into a more gradual release cycle. Personally, I enjoyed the much-deserved break after playing a pile of these games a few years ago.

But I’m always a sucker for a good cyberpunk theme, so when Escape Tales: Low Memory showed up at my door, my interest was piqued. I’ve yet to play an Escape Tales game and I was curious to see how it stacked up to my favorite of the genre, Unlock! Let’s find out, shall we? Also, for those concerned, this will be a spoiler-free review. Any photos are from the tutorial mission.

Unlike most escape room games, Low Memory is not a timed game. Players can take as long as they like to suss out the answers to the puzzles. The limiting factor in the game comes from your actions. Low Memory takes place in a few different locations, each of which is broken up into a 3×2 grid (usually 2 cards worth). Each time you want to explore a section of a room, you put an action token on one of the spaces of the grid and read the matching entry in the journal. These will give you a little bit of the narrative and usually instruct you to take a card from the large, numbered game card deck.

Most game cards are puzzles that players have to solve or items that will be useful at some point. Answers to the puzzles are inputted into a mobile website that tells you if you are correct or not. This app is fairly benign and really only serves to tell players if their answer is correct (and to provide hits when requested). More on this later.

When players inevitably run out of action tokens, they must draw a stress card. These provide more tokens to use, but eventually start affecting the story and your overall ending. There is no way to lose Low Memory, but the ending will be decided based on the choices and stress cards you drew along the way. Almost like a choose your own adventure book.

For the most part, escape room games are made or broken by the quality of their puzzles. Too easy and the game will be forgettable, yet too hard and players will get frustrated and not want to continue. So game designers must walk a tightrope if they hope to satisfy a wide group of players. Low Memory ended up having a nice range of puzzles, some of which were actually quite clever. Yet, I also found a handful that were maddeningly frustrating. There was a least one puzzle where we burned through every hint in the app to the point where it just told us the answers and I still had no idea how it got to that conclusion. Puzzles like this made me want to chuck the game in the bin. But thankfully, those were few and far between. Most were solvable with a bit of logic or creativity.

One thing that was a stroke of genius was that the app can tell you if you have all the cards needed to solve a puzzle. Nothing is worse than a game handing you a card/puzzle but not telling you that you won’t be using it for another half an hour. This way, I can click a button and see how many cards are needed (but not which specific cards) to solve this puzzle. This avoids me banging my head against a wall for 20 minutes when I didn’t even have all the tools I needed.

When it comes to the hints the app provided, I wish there was some warning before they gave you the answer. Hints are multilayered and you don’t really know when you’ve got the last hint, as the next click of the hint button will just spit out the answer. A warning before that would have been nice. There are times when I quickly was clicking through hints as it was already telling me things I knew, only to have the answer shot at me.

The biggest thing that Low Memory does differently from others in the genre is using action tokens instead of a timer. While it’s nice to solve puzzles at your own pace, exploration was moderately annoying. The art on the cards was somewhat weak, more cartoony than detailed, so it wasn’t always clear if you were looking at something relevant on the card. And if an item of interest spanned two different grids, you also didn’t really know which square was is going to talk about what you wanted to know. Overall, I wasn’t a huge fan of the system. Exploration is required to move the story forward, and it sucks wasting limited actions on areas with no relevance to the story when only a vague cartoony item was your clue as to what was in the space.

Finally, while most escape room games aren’t really going to have that immersive of a story, I found Low Memory to be somewhat forgettable and, at times, hard to follow. Instead of one long, linear tale, it’s 3 interwoven stories from different perspectives. While this may work in movies, it wasn’t all that successful here. And frankly, I didn’t find myself caring too much about any of the characters.

Escape Tales: Low Memory has some pretty stiff competition between the much loved Unlock and EXIT series. While I appreciate them trying something new with the action point system, it just wasn’t a huge hit for me. Perhaps it was the cartoony art that made it hard to pick out details. But that, combined with the forgettable story and some overly hard puzzles doesn’t really have me excited to try out more in the series.

Overall I think Escape Tales: Low Memory is a good game, but I’ll probably stick with the Unlock series if I’m looking for getting my escape room fix. Yet for those that like challenging puzzles and want to get away from a timed system, Low Memory is worth a look.

Final Score: 3 Stars – It takes the escape room genre off in a different direction, but the artwork isn’t doing this one any favors.

Hits:
• The app stays out of the way for those concerned
• No time limit
• Love how it tells you how many cards you need for a puzzle