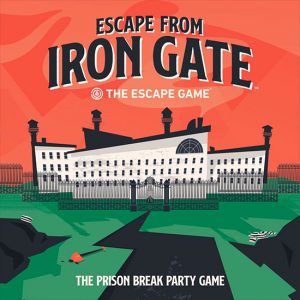 The Big House. The Slammer. The Joint. You’ve been a guest for long enough and now its time to make your break. But apparently you’re not the only human with a plan, and now the race is on to see who will Escape from Iron Gate before the alarm is sounded.

Escape from Iron Gate is a 3-8 player game that takes about 60 mins to play. It plays well at any count but best at 7-8.

Escape from Iron Gate is a party game where players take on the role of wrongly accused prisoners who decide to make a final bid to escape back to freedom. The catch is that only one person can escape—so you need to enact your plan as fast as possible to make sure you’re the one that makes it out. You have a four-step plan: Pick the lock on the cell block, dig your way from the yard into the cafeteria, crawl through the air vent into the Warden’s office, then make a break for it out the window. To enact this plan, you are going to need supplies.

The primary way of getting supplies is through the puzzle and action cards. On your turn, you will roll two dice that each have faces that say “A” for action or “P” for puzzle. If you roll two of the same letters, you will first draw a “Lucky” card, which will have on it a random event to follow.

After you resolve the Lucky card, you’ll draw the type of card that you rolled. If you rolled one P and one A, then you skip the Lucky card and just draw either an action or puzzle card, whichever you prefer. If you draw a puzzle, you’ll have until the start of your next turn to solve the card. The puzzles might be trying to guess a common phrase from a picture, a word game, a visual math puzzle, code-breaking using the symbology scattered across the board or more. Guess the puzzle without a hint and draw a rare card, or your neighbor can use the red filter to provide you with a clue, which gets you a common item if you guess correctly.

If instead, you drew an action, you’ll have to get your opponents to guess as you either act out or draw what’s on the card in 30 seconds. Why would your opponents help you? Because whoever guesses your card will receive a reward too, based on the difficulty of the word. The harder the word, the better the reward for you both, and you don’t tell your opponents the difficulty of the word so they don’t just sit out because the rewards aren’t what they are looking for at the moment.

After resolving your card, you get to take one of the following optional actions. You can trade cards with another player, or trade with the bank (known as the commissary), or pay supply cards into the commissary that match the next step of your escape plan to advance rooms. Normally, trading with the commissary is at a pretty bad exchange rate, so trying to negotiate with fellow players is usually the way to go. The first player to complete all four steps on their plan immediately wins the game.

Draw, act, or puzzle your way out of jail. Escape from Iron Gate feels like the gritty reboot of Cranium. And I’m totally ok with that. With the different modes of gaining clues, no one gets left in the back of the pack for long. Even a poor artist/actor/puzzle solver can gain some advantages purely through good guessing. And at higher player counts, in particular, the gameplay interaction becomes completely ridiculous with deals being made and charades being guessed.

The old school art fits the theme, the setting feels like a scene in a 1930s crime drama. Because of the style, the graphics are easy to read. The rulebook includes a quickstart guide—anything that gets you up and playing in under 5 mins is the BEST in my book. There are also a ton of cards, guaranteeing it will take you a while to get through the bulk of them.

I also should note that I’m not keen on opening trading—there’s always at least one person that didn’t hear the rules correctly and is going to trade away something they need and regret it. Additionally, it makes it kind of easy for someone to play kingmaker.

You’ll recognize all the puzzle types, but if you are a regular puzzle game player it’s going to be way too easy for you. A mix of real challenges with good clues would make an interesting challenge for more advanced players. You’ll also want to sub out the notepad for the drawing phase—it’s a little small and that presents some challenges when trying to show 7 people at once. (Also, maybe it’s a me thing, but do we REALLY need more golf pencils in the box?)

There’s nothing new under the sun here, but there doesn’t always have to be. Escape from Iron Gate is a rollicking party game for folks that want something just a touch more organized than Pictionary or Charades, but they can still drink and grab a nosh from the charcuterie tray during the game.

Hits:
• Watch your friends try and act out “charcuterie’
• Art style completely nails the feel of a ‘escape the rock’ style adventure