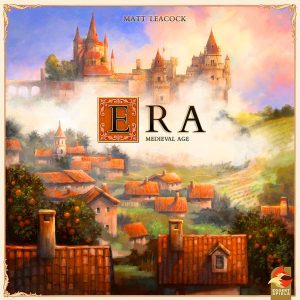 I did not know what to expect the first time I played Matt Leacock’s Roll Through The Ages (RttA). Tracking dice rolls on pencil and paper? Rerolling three times? Was I secretly tricked into playing Yahtzee? Needless to say, I was hooked after just a few plays, in the time immemorial when there was no “roll and write” defining term.

Era: Medieval Age, Leacock’s latest design from eggertspiele, integrates similar mechanics as a “spiritual successor” to RttA, but instead of a piece of paper, you construct a castle in what is billed as the first “roll and build” title. This was my most anticipated game of Gen Con 2019 – let’s see if my interest was well-positioned!

Era: Medieval Age is a dice-rolling resource management game that plays in around 30-60 minutes. Era is designed for 1-4 players, and plays well at any player count.

Players begin Era with a partially built castle, with some walls, a tower (providing a grey “noble” die), three houses (each providing a yellow “citizen” die), and a farm. At the outset of the game, players lay out their buildings on their personal castle board. Placement of the buildings is important, as their position has boons and penalties as the game progresses.

The dice comprise the central mechanism of gameplay, with each type of die containing a variety of symbols unique to that type of die. Symbols include resources (treasure, stone, wood, wheat), swords and shields (involved in extorting other players), hammers (for constructing buildings), books (to gain culture) and feathers (to allow an extra reroll). The only time a player cannot reroll a die is if they roll a skull symbol. Building a dice pool of varying dice opens options as to what you can achieve on a given turn.

Each turn breaks down into six phases, detailed below.

Play cycles through these phases until all the buildings of five different types are constructed, at which end-of game scoring commences. The player with the most points at the end of the game is declared the winner!

In evaluating whether Era succeeds as a “spiritual successor,” we questioned whether the spirit of the original Roll Through the Ages is expressed well, with enough variation on gameplay that it stands successfully on it’s own. In terms of rules, anyone familiar with RttA will see very similar mechanics in comparision. The wide variety of building abilities, placement options, and the extortion mechanic all give Era the variation it needs to be recognized as a great game in its own right.

What makes this title truly engaging is the thought and strategy required in assembling your castle. With buildings in limited supply, and layout key for maximizing scoring and avoiding disasters, castle layout needs to be considered right from jump. While it is possible to recover from a placement blunder early on, it is something that players need to be considering at all times while playing. It makes Era that much more interesting of a game, having to continually run a risk-reward analysis on how your castle is put together.

It goes without saying that the actual castle components are well-sculpted, and truly contribute to the game experience – we simply love the building bits, and are already considering what sort of leveling-up we can do to them. Overheard at our table was the notion that this is a deluxe version of a roll-and-write or a tile-laying game that was simply not needed, but we generally disagree with that sentiment, as the fact that you can see your castle develop in real time and in three dimensions gives Era that extra boost of enjoyment. In addition, the tactile nature of the player boards and buildings helps in improving game accessibility, which we applaud any time we spot it in game design.

Our primary issue with the game comes in the construction and design of the player board. On the bright yellow board, symbols and numbers on the resource tracks, as well as symbols for phases and penalties are practically unreadable, as they are created with such shallow molds for the raised symbols and the engraved numbers. While industrious gamers have already developed some DIY fixes for this, this significant oversight in the design of this central component bears mentioning. Aside from the physical design of the board, the bright yellow color of the board exacerbates the problem of reading the symbols, and actually does quite a bit of breaking the game immersion. On a purely aesthetic note, the color is garish and simply unappealing. We are not sure where in the process this design was finalized, but we would urge the publishers to consider retooling and redesigning in the event of expansions or reprints.

While seemingly nitpicky, the lack of a game board is a bit of an annoyance. Since the end game is triggered when buildings are used up, having a game board to be able to visually track that would be helpful. Normally, we would not worry about such a minor thing, but we felt it merited inclusion simply because eggertspiele was offering a nice neoprene play surface for a sizable chunk of change, they obviously felt that the presence of some sort of aid to help track the game is needed. The game is rightfully expensive as it stands – asking players to open up their wallets for a component (obviously, not neoprene) that could and should be included in the box is not a bridge too far.

Era: Medieval Age grabbed our attention pre-Gen Con with its promises of a “roll-and-build” style of game, and it delivers on all of its claims. The gameplay is smooth, with depth of strategy and a tactile feel that makes this a title that we want to continue to bring back to the table on the regular. Era: Medieval Age is definitely a worth successor to Roll through the Ages and manages to stand apart on its own.

Hits:
• Engaging choices and depth of strategy
• You get to build your castle with all the fun castle bits
• Straightforward rules make it easy to bring to the table