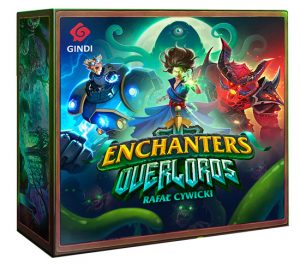 Be prepared to take on the role of an Enchanter, a mighty hero who must defend the helpless village with magic and might. You’ll be crafting a powerful artifact to take on the hordes of monsters and dragons threatening the townspeople.

OK, sure, I could have just described about a thousand fantasy novels, movies, or games right now but we are actually talking about Enchanters: Overlords. A tableau-building game that was originally published by Gindie, but is now under the Mythic Games envelope. This game is all about drafting cards, smashing monsters, and earning victory points. Sound fun? Read on fellow adventurers.

Learning to play Enchanters: Overlords is easy. First, players choose 4 kingdom decks to use out of a possible 22. These are all the standard fantasy tropes you’d expect (Demons, Faeries, Goblins, Undead, etc…). The four chosen decks are shuffled into one great big deck and six cards are dealt out to create the Journey Track. Players also choose a village to defend (out of about 30 or so options) and they are ready to start.

On a player’s turn that can either Journey or Rest. Journeying is the main action that will allow players to draft a card from the Journey row. The first card is free, with subsequent cards costing an increasing amount of crystals. If the card is an item or enchantment, it’s added to the player’s tableau, placed on top of a previously played card, leaving the bottom of old cards showing. In this way, players still gain some powers from older cards, with their top card usually having special abilities.

If the card was a monster or dragon, they must fight. Every monster has an attack value and hit points. A player’s attack strength must be enough to equal the monster’s life points. And for every point of attack strength a monster has that’s greater than the player’s defense value, they take a wound, which are negative victory points at the end of the game.

If a player can’t or doesn’t want to Journey, they can rest. This will heal wounds or earn crystals to spend. The last card on the Journey track is then discarded.

The game ends after all the cards on the journey track have been claimed or discarded. Players total up their victory points from items, enchantments, and monsters. The player with the most points is the winner.

Every now and then a game appears on my table that has me stop and wonder, how have I not heard about this one? Enchanters: Overlords is one of those games. Now in its third iteration (Enchanters and Enchanters: Odyssey were the first two), this stand-alone expansion is a game that has been building up content steadily since 2016.

After playing several games of Enchanters: Overlords I’m still shocked at just how much content is in the game. With 22 kingdom decks and 4 chosen for a game, that’s over 7000 possible game combinations (if I’m mathing right). And then you add in the fact you are only choosing 1 village card out of a couple of dozen, and the replay value keeps creeping up.

And we haven’t even gotten into the minor expansions included. The main one is the Overlord expansion. There are about 20 Overlord cards, which give players a big bad evil guy to attack during the game. If you decide to play with an Overlord, he provides another enemy for players to attack to earn victory points, and also usually does bad things when a player rest. I liked playing with the Overlord as it added a nice extra layer to the game and wasn’t hard at all to add in.

In short, Enchanters: Overlords provides some of the largest replay value in a game that I’ve seen in a very long time. And that’s not even talking about the banner, class, event, or wound decks—these all add small extra layers of variety and interest to the game.

So yes, lots and lots of things to help make each game feel unique. But how does it actually play you say? Enchanters: Overlords is very easy to pick up and learn, which is definitely a plus. Setup takes only about 2 minutes and rules explanation just a few more. The gameplay itself is a light drafting game, with a bit of resource management. Deciding which card to take can be interesting, as you not only have to balance taking items and enchantments vs fighting monsters. Monsters provide the best route to victory points, but items that provide attack and defense are definitely necessary as well.

Speaking of the items, I really liked the stacking system where old cards still provide value. It also makes for some tough choices since when you claim a new item or enchantment, you have to weigh what the new card is giving you vs what you will lose when you cover up a card. At least the covered card will still grant minor bonuses, helping to give your artifact a bit of a legacy.

Enchanters: Overlords is a really fun game with some solid production values, yet there are a few areas where it falters just a bit. First, the rulebook could be better. Some things we had to hop online to find answers for (such as missing icon descriptions) and there are also some vague rules and typos. This one could have definitely used an outside editor.

The other thing to be aware of is that Enchanters: Overlords has a decent amount of “take that”. Whether that’s a good or bad thing will entirely be dependent on your group. I will say that the “take that” isn’t all that punishing, so don’t expect a Munchkin level of ganging up on other players here. Personally, I felt that it helped give the game a nice bit of player interaction without being so over the top to turn players off from the game.

Finally, I should mention that the game also comes with a fully coop mode. Some games can definitely straddle the line of being a competitive and cooperative game, with both modes being equally fun (Nemesis comes to mind). Unfortunately, Enchanters: Overlords isn’t really able to pull it off. Coop mode felt somewhat tacked on and fairly swingy. Frankly, I wouldn’t recommend this game for cooperative play. As a competitive game, it’s great, but if you are looking for a coop experience, you’d be better off with another game.

Enchanters: Overlords is a game that you can easily pull off the shelf whenever you are in the mood and jump right in and play. You’ll feel like you are getting a fresh game experience yet only need to spend a few minutes refreshing on the rules. The game includes not only a ton of expansions but also gameplay variants to tweak things to your preference. Speaking of, I’d highly recommend players use the “Fast Invasion” variant, which pulls 5 cards per player out of the Journey Deck. I tried a game without it, and it bordered on overstaying its welcome. With the Fast Invasion rules, Enchanters: Overlords is spot on.

It’s hard not to recommend Enchanters: Overlords for anyone looking for a light, drafting and tableau building game. Sure, the rulebook could be better and cooperative mode is forgettable, but as a competitive game, it’s a ton of fun and is something you can be playing for quite a while to come.

Hits:
• The Kingdom decks feel different from each other and provide lots of possible combinations for each game
• Excellent art and components
• Easy to jump in and play
• Good player interaction, lots of variant rules

Misses:
• Rulebook could be better
• Cooperative mode is forgettable