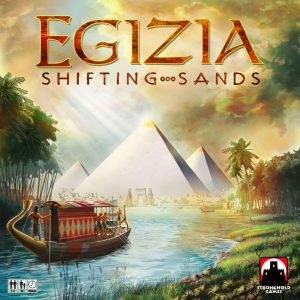 Ancient Egypt is a prime setting for all kinds of media: movies, video games, and, of course, board games. In 2009, Egizia had players taking the role of builders trying to construct the Egyptian monuments like the Sphinx and Pyramids.

But we aren’t looking at 2009’s Egizia. It’s been given a shiny new coat of Kickstarted paint in Egizia: Shifting Sands. The theme is basically unchanged with some new mechanisms and balancing to address concerns that tend to come up when a strategy game is played for 10 years.

Egizia: Shifting Sands is played over five rounds. You’ll start each round by placing one of your boats on any of the empty spaces along the Nile river. These spaces could contain a Nile tile that will give you a one-time bonus, a card that can give you one time bonuses or recurring resources, or a building space that will allow you to build in the next phase of the game. When your next turn comes around, you’ll place another boat, but it must be downriver from your other boats. So, your placement is a careful balance between skipping too far ahead and losing out on the really important actions you want.

In general, you’ll be trying to do as much building as you can. To do so, you’ll need stone and workers to move that stone. You start the game with four workers: three “regular workers” with one strength and one leader that has two strength. Many of the action spaces along the Nile will allow you to increase the strength of your workers, which will let you contribute more stone to the Egyptian monuments.

Each building area along the Nile corresponds to a different zone to build in. The first stop, for example, will allow you to build in the Obelisk or Colonnade. Each space in the monument has a different stone cost. However, you don’t just need the stone in your supply, you must also contribute the strength of your workers. Your leader can assist any regular worker, adding their strengths together, but all workers can only be used a maximum of once per round.

So, you clearly should focus on increasing the strength of your workers. Of course, the more muscles you have, the more you gotta eat, right? After the placement phase you’ll generate food from any fields you have and you must have a total amount of food equal to your total strength, otherwise you’ll pay victory points for the starvation you encounter.

So, what does building even do anyway? Well, for starters, you’ll earn points equal to the amount of stone you spent. Each building also gives you an additional benefit. Examples include changing the penalty for starvation or end game scoring opportunities. After five rounds the players add their points from the statues and Sphinx to the other points they’ve collected throughout the game. Whoever has the most points is the winner.

On the face of it, Egizia: Shifting Sands has a similar “earn resources and spend them on points” structure of many euro-style games. Its theme may be well used and the 10-year old euro sensibilities mean there aren’t any incredibly exciting turns. But the use of a one-way track to pick your actions is what really sets Egizia apart and has made it the type of game that deserves a refresh after a decade.

You are constantly battling jumping farther downriver to grab an action you really want versus potentially taking more actions. But unlike similar games, the turn structure is just clockwise around the table… so it’s not always the turn of the player who has traveled the least downriver. This means you can potentially jump to the middle or even nearly the end of the river and gobble up all the actions down there.

The building actions are, presumably, the most valuable. There isn’t room for all players to build at every zone. So, you will be tempted to grab those early and often. But if you don’t have the strength of stone resources to take advantage of them, those actions won’t do you too much good. You can always just forgo worrying about providing enough food to your workers, but that can be a costly approach.

The different monuments add a lot of depth to Egizia as well. The Obelisk can give you significant points and move you up in the food and stone market. Potentially giving you the opportunity to sell your extra food for victory points, giving the game almost an alternative route to victory. The Colonnade powers and statue scoring change from game to game, forcing you to be flexible and try out different strategies each time.

The statue cards are public end game scoring opportunities for all players and the Sphinx location will give you personal endgame objectives. These can help shape your strategy throughout the game and change your reliance on the building zones as they can offer ways to earn victory points through other means. The fact that the statues also change every game gives even more replay value and gives players opportunities every game to find new combinations of things that can work together to provide efficient use of actions.

Egizia: Shifting Sands hits the sweet spot of mid-weight strategy games in terms of the depth of strategy in a quick playing and fairly light on rules game. Each turn your placement of a boat on the Nile river represents not only that action you are taking, but all the preceding actions you are giving up. And signals to the other players how quickly they may need to move down the Nile to make sure they can build and gather the resources they need.

The variable setup with Colonnade powers and statue scoring add plenty of new wrinkles as you play more and more. The facelift for Egizia: Shifting Sands makes the game look great and it is one of the rare examples of a new edition making just enough changes to make it feel fresh but not unfamiliar.

Final Score: 4 Stars – An update to a euro classic that will be around for another 10 years.

Hits:
• Balances some of the overpowered cards from the original.
• Variable scoring opportunities each game.
• Action placement down the Nile is a great use of a one-way track.

Misses:
• It lacks a bit of flair and excitement.
• Egyptians building pyramids isn’t the most unique theme to date.