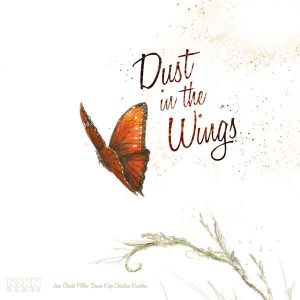 I must say, I’m a fan of the recent trend of game designers taking age old mechanics and giving them a new spin. Bruno Cathala did it with Kingdomino (dominoes) and Five Tribes (Mancala). Antoine Bauza did it with Samurai Spirit (Blackjack), and heck, even Ticket to Ride is basically rummy.

Today we are going to look at the newest game to take century old mechanics for a new spin with Dust in the Wings. Published by Boards and Dice, this abstract strategy game has players building patterns out of butterflies to score points.

Dust in the Wings uses the mechanics from Mancala for the core of its game. On a players turn, they choose any group of butterflies on the grid and pick all of them up. Then they proceeded to drop them, one butterfly at a time, on orthogonally adjacent spaces until all of the butterflies have been placed. Finally, if the last butterfly they placed was in a square that can fulfill one of the scoring cards, they add that card to their score pile.

There are two types of scoring cards. The Gathering cards tasks players with trying to have specific colors and amount of butterflies in a space. While the Composition cards want players to have a group of spaces with a certain number of butterflies. The spaces must also match the pattern on the card.

After a player’s turn, they replace any scored card with a new one from the deck. If it was a Gathering card, they also add a gem to each of the three Gathering cards. If a card already had three gems, it’s discarded and replaced.

The game ends once the gem bag runs out. Players total up their score and the player with the most points wins.

I’ve heard Dust in the Wings thrown around as “Five Tribes Lite,” but to be honest, other than the Mancala mechanic, there isn’t much similar between the two. If anything, I’d call it a somewhat deeper spin on Mancala.

And it’s this Mancala mechanic that helps to make Dust in the Wings so easy to learn and teach. Even players that aren’t familiar with this ancient game can pick up the rules in minutes. Pick up the butterflies and drop them off as you go. Easy peasy. The hardest thing for players to remember seemed to be that you have to use the last square you dropped a butterfly in with your scoring card.

Dust in the Wings is also a very tactical game. Even with only two players, there isn’t much point in planning ahead. The board state can change so much between turns that you are basically reacting on your turn. I’ve tried to set myself up for future turns, only to have my moves immediately thrown out after the very next player went.

And that’s also the reason for the biggest problem with Dust in the Wings. The downtime can be brutal, especially for players with analysis paralysis. Most players will want to maximize their scoring opportunities on their turn, but there are a lot of squares and butterflies to analyze to trying and figure out no only which cards you can score, but to make sure you don’t leave an easy score for your opponent. Frankly, I don’t ever want to play this game with 4 players, as I may as well just play another game in between turns.

That being said, I did find the gem scoring mechanic to be quite clever. It not only adds value to lesser used cards, it also helps to refresh those same cards so they don’t sit there too long if players are ignoring them. And not only that, as the games timer, players can focus on collecting the Gathering cards should they want to speed along the game’s end, or move to the Composition cards if they want to try to build up points first.

Dust in the Wings is a fine game. While it’s not particularly exciting, it does have a low barrier to entry and some nice production values. It could be a great gateway game if you know someone that is enamored with Mancala, as they would most likely take to it immediately. For me, I feel like after a few plays of Dust in the Wings, I’ve kind of seen all it has to offer. The games aren’t that different between plays, and the downtime between turns makes me have zero interest in playing it with more than two players.

Final Score: 3 Stars – A game that’s easy to get to the table and looks good at the same time. Beware of players with analysis paralysis though.

Hits:
• Easy to learn and teach.
• Nice production values.
• Gems as the game’s timer was a nice mechanic.

Misses:
• Downtime can be brutal.
• Can feel samey after multiple plays. 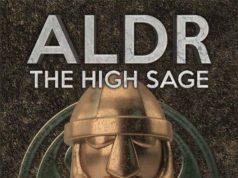