We review the expansion to the worker placement game Dungeon Lords. If you are looking to add some complexity and additional options to your game of Dungeon Lords then be sure to check out this expansion.

This review is for an expansion for Dungeon Lords. If you haven’t already, you can read our full review for the base game. 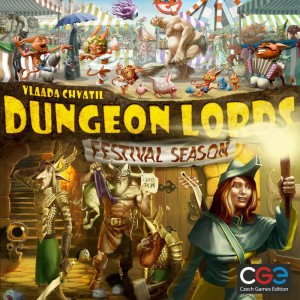 Are you an experienced evildoer looking for new ways of building and upkeeping your sanctum sanctorum? Do you wish you had some extra time to prepare for the ne’er-do-evils that want to come ruin your hard work and fun? Are you chomping at the bit for the ability to smite some bards (because, let’s face it, nobody likes the bard in the party)? If so, then rejoice, for Festival Season is upon us!

Dungeon Lords: Festival Season (henceforth to be referred to as DL:FS) does not fundamentally alter the game play of Dungeon Lords. Rather it provides another layer of rules and opportunities for the burgeoning evildoer. An additional season is added to each year of the game (now containing winter, spring, summer, autumn and festival), which provides another round to prepare for the invading adventurers. There are Unique Opportunities which change the areas of the central board where resources are collected. These give a shifting set of options that change each season with some new and improved rooms, traps and monsters to choose from when defending your dungeon. Finally, like any homeowner would want, you can adopt a pet, which can provide you with assistance as you guard your home.

All of that is needed because the heroes are stepping their up their game as well. Two paladins (an elf and a dwarf) stand ready to lead the charge against your darkness. They are accompanied by bards (a new character class), and armed with new spells and weapons to fight against you. You may benefit from an extra season to prepare, but you know that the goody-goodies are going to take advantage of that time and bring everything they have by engaging in an extra round of combat.

As with the base game, the components are top-notch, both in construction and in artwork. The illustrations show that no expense was spared in making sure that you are continually immersed in the theme. The new monsters, adventurers and tiles all show the same attention to detail as in the base game. Of particular note are the Petz, which match up with the animals in Dungeon Petz. CGE has done a great job of world-building across both of these games.

Adding rules to an already complicated game can lead to a disaster of a rulebook, but the rules for DL:FS are written in the same concise and humorous manner as the base game. They were sequenced and organized logically and stated clearly. Having a section that summarized not only the additions to game play, but where those additions took place, made it easy to work the expansion into the base game.

DL:FS’s first expansion to the rules is the addition of the Unique Opportunities, giving new actions for you to perform on your turn, but options that are only available once per game. There are eight Unique Opportunities corresponding to the 8 sections of the central board. The upcoming Unique Opportunity is turned up one season in advance (much like the heroes are) for players to plan ahead, and then replaces a specific space on the central board. The new options provide a twist to the way that space’s resources are collected. For instance, instead of paying gold or decreasing your reputation to gather food, the Unique Opportunity allows you to assign imps for food (ostensibly “helping” the villagers with their harvest). It is important to keep an eye on the upcoming tile for the following season to make sure you do not find that the strategy you were planning on enacting cannot occur because that space will be replaced with a Unique Opportunity.

The next is the change to the Seasons board by adding a fifth “Festival” season at after the Autumn season. This gives each player an extra round to prepare for the upcoming battle. The normal sequence of events happens during this season (roles are selected, minions are deployed, special event occurs), but the eponymous Festival occurs. The Unique Opportunity tiles are presented for auction, with the number of available tiles depending on how many players there are. Each tile grants a particular boon depending on the tile (gain a food, gold, imp or trap, hire a monster, build a room, move up on the respect track). Players bid their available imps, with the highest-bidding player selecting first, then the remaining players choosing from the leftovers.

The addition of Petz gives you some extra flexibility in terms of power. Petz are selected via a draft mechanic and are also available through one of the Unique Opportunity spaces. The powers the Petz have vary, with some granting bonuses to construction, while others to combat, and others to your final score. You get a point added for every pet you elect not to use over the course of the game.

Combat is changed by the inclusion of a 5th round because if you get an extra round to prepare, the heroes certainly get another round to wreak havoc. A new bard character is added to the pool of possible heroes to draw, giving new flexibility and options when planning your optimal strategy. Bards are particularly annoying because they provide protection to the lead adventurers by giving them “courage,” which neutralizes attack damage. In later rounds, however, this protection wears off as adventurers are captured, so it is worth it to strike hard and fast when you know a bard is present in the band of do-gooders you are facing. More additions to combat are the presence of two paladins (each one step stronger or weaker than the paladin in the base game) that are there to take on multiple dungeon lords who get too evil, as well as the addition of new combat cards for more potent effects from spells during combat.

Game Experience with the Expansion

As if Dungeon Lords wasn’t already complicated enough! If you’re choosing to integrate Dungeon Lords: Festival Season into your base game, I highly recommend that you only do so if you are already proficient with the rules and mechanics of the base game. If not, you will be constantly flipping through two rulebooks when you are playing the game trying to wrap your head around everything.

The addition of the Unique Opportunities really forces players to plan their choices for minion placement and action selection even more carefully, since its possible that an action that you really need may be replaced on the next turn. The subtle changes to the way resources are gathered through the Unique Opportunity spaces add some new strategy that is refreshing, if at times requiring a trip to the rulebook. That the Festival options in each of the two years relies on which Opportunities are drawn that year adds some variation and replay value to the game.

Speaking of the Festival season, having an extra round to get things done in your dungeon is a great portion of this expansion. Dungeon Lords was so tight of a game that it punished players who made one misstep in their planning and action selection. Having an extra round to prepare for the invaders gives players a bit of slack if they make an error in judgement and need just one more action (or two or three) to get themselves ready for combat.

While the Petz that are integrated into this game to help build the Dungeon Lords franchise & mythos, they didn’t seem to add too much more to the game other than flavor and a bit of variable power for each player. The drafting mechanic to choose the pet for each round was clever, but if your pet’s power did not fit in with your strategy and needs, it just sat there to be worth a single point at the end game.

The addition of the new monsters, traps, rooms and paladins were refreshing in that they gave the base game a bit of new life, but they weren’t over the top in terms of throwing off the game balance. However, adding an extra round of combat could be particularly punishing to a dungeon lord who did a substandard job of building their dungeon. That said the game does provide variant rules to make combat easier on less seasoned overlords.

Expansion Score: Optional – Worth adding to your collection if you think you’ve mastered Dungeon Lords.

Hits:
• Mechanics of the base game are not fundamentally altered
• New options for action selection provide reward strategic thinking
• New rules are easy to pick up if you are highly proficient with the base game

Misses
• Adds more complexity in decision-making to what is already a complex game
• Some aspects of the expansion seem tacked on (the pets, most notably)