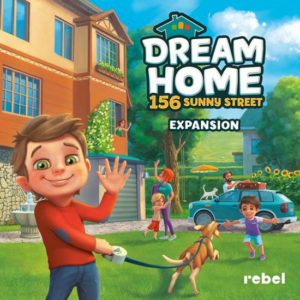 Dream Home was one of my sleeper hits from 2016. It’s a light card drafting game that can be played with just about anyone. The rules are super simple. Draft a room and a resource card each round and build out your house, trying to earn the most points along the way.

The game is just as easy as it sounds. Which also means that gamers who played it a lot where immediately clamoring for an expansion. This year saw the release of Dream Home: 156 Sunny Street. Does this expansion add the variety to the game that we were all hoping for? Let’s find out.

Dream Home: 156 Sunny Street is actually a series of modules that can be incorporated into the base game either all together, or just using the bits you like. There are 3 different areas where 156 Sunny Street expands the gameplay.

The biggest change is that the expansion adds support for 5-6 players. 48 new cards are added (split between resource and room cards) along with the necessary player and main boards. For those looking to play with more players, this is a welcome change. The new cards aren’t simply rehashes of cards from the base game, but many change things up and offer unique rooms (more on this in a bit).

The next module is the Construction Plans. Twelve in total, these plans give players a goal to work towards at the start of the game. Each player gets a 3 point and a 5 point plan, with the player scoring the higher of the two they manage to complete. The 3 point cards are fairly simple: Have a 3 card room on a floor or have the same number of bathrooms and playrooms. The 5 point cards are more likely to alter your decision making during the game.

Finally, the last module are the Friend Cards. Each player can score up to two friend cards during the game. These are obtained (from a communal pool) by having the required rooms on a floor. For example, one card might require you to have a playroom, kitchen and living on a floor. If you do, you score 3 bonus points.

Much like the core game, playing with the expansion is relative easy. Both of the new modules require only minimal explanation, so you could conceivably play with them even on your first play. However, if you were playing with a group of non-gamers, I’d probably leave them out to avoid rules overload.

Of the two main modules, I’d say the Construction Plans are my favorite. The Friends cards feel almost like an after though for strategy. Usually the points aren’t enough to dictate a change in strategy, so I’d just grab one of those cards if I happened to achieve them throughout the normal course of the game.

The Construction plans, while still only maxing at 5 bonus points, do at least require some forethought. Their points aren’t going to break the bank, but working on them can provide another outlet for decision making, increasing the fun you have with the game.

While both of those modules work fine, none are really the driving force behind the 156 Sunny Street expansion. The real draw here is the 5-6 player addition. The ability to play with a larger group was a welcome addition, especially since downtime in this game is fairly minimal. The expansion also includes rules for solo play if that’s your thing.

Yet the one thing that annoyed me is that you really don’t use the new expansion cards in a game with less than 5 players. To be fair, there are rules for adding the new cards into the mix with less than five, but it’s a rather clunky process that, for a game as light as Dream Home is, almost doesn’t seem worth the effort. One of the nice things about Dream Home is that you can just shuffle the cards and start playing. Having to setup a deck ahead of time (and then break it back down) was not very appealing.

The Dream Home: 156 Sunny Street expansion does a nice job of adding a bit of variety to the game play, all while still keeping an eye on who this game is targeting. However in my opinion, the decision to get it should largely be based around if you want to play with more than 4 players. The Construction and Friends modules are nice, but for me, weren’t enough of a draw themselves to get this expansion. If you don’t see yourself ever playing with more than 4 players (or solo), and don’t have any interest a lengthier setup/teardown time, than you can safely give this one a pass. For those looking to play Dream Home with a bigger group, or REALLY wanting some more variety in the game, it’s worth an add.

Hits:
• Easily integrates into the base game
• 5-6 Players still works well
• New cards aren’t just rehashes of the old ones