We review the cooperative card game Dragonfire, published by Catalyst Game Labs. In this Dungeons and Dragons themed card game players must work together to complete all the encounters before the all perish. 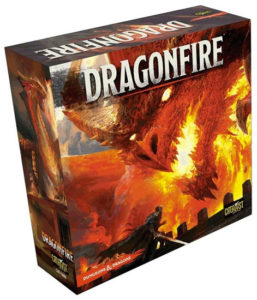 I believe I have stated this in previous reviews, but I love both coops and deck building games. In addition, Dungeons & Dragons was a staple of my gaming growing up. When I saw Dragonfire, a cooperative deck building game based on the Dungeons & Dragons brand at Gen Con 2017, I knew I wanted to play the game. Then when I found out it was a reimplementation and improved version of Shadowrun: Crossfire, I knew I had to GET the game.

I have it, I have played it, and am happy with this game – but is it for you?

Dragonfire supports up to six players with games lasting between 60 -90 minutes.

Players choose an adventure to start the game. An adventure takes place over multiple scenes and describes how to set up the game, including setting up the encounters (monsters and/or locations that the players must defeat).

A Dragonfire card is (usually) drawn when the game starts and play begins with the party leader. Cards are then played by the active player, as well as by the other players, but only if the card has the “assist” keyword. Once all cards have been played on encounters, damage is calculated, and defeated encounters are removed, with gold rewarded to the party.

If there are any encounters still in front of the active player, that player takes damage from those encounters. If the active player is not stunned, they draw two cards and then purchase cards from the market using their hard-earned gold. Cards bought are placed directly in hand. If all encounters were eliminated, the party either wins (if it is the last scene) or takes a rest and then the next scene starts.

If there are encounters still in play, the next player to the left becomes the active player and the steps from above are repeated until the scene is completed, or the whole party is exhausted, a nice way of saying slaughtered.

I thoroughly enjoyed Dragonfire. While it is a deck builder, it has several mechanics that differentiate it from the pack.

For example, hand management is different from any other deck builder I have played. Purchased cards are taken directly into your hand instead of the discard pile. When there is an assist card in the market that your party desperately needs, you may pass up the purchase of a more powerful card to get the assist into your hand immediately.

I also enjoyed the coop gameplay itself. When it comes down to it, the game is a puzzle. Monsters have damage tracks based on levels, and each level is made up of one of five thematic types, with each player usually good at fighting one of the specific types. In addition, sometimes there is a bonus for the player’s class that plays the card matches the specialty of the class i.e. a fighter playing a martial card. The damage tracks must be cleared from top to bottom, except for the uncommon instance when a card effect breaks this rule. For example, the Half Ogre has the following damage tracks: three colorless, one martial, one deception, one colorless.

As a team, players must best decide how they want to play their cards. If the active player only has a 1 damage martial card and a 1 damage deception card (note: every class starts with at least one card for each of the four colors), should the other players provide three damage to clear the first level of the damage track, so the active player can clear the second and third levels? Should they save their assists for later instead of using them that phase and let the active player get damaged by the Half Ogre?

This is a simple example of the puzzle of maximizing the damage done and managing cards in every phase of Dragonfire. Now imagine trying to figure this out when every player has at least one encounter in front of their character and determining the best method to eliminate the encounters. Except it is not THAT easy…

Enter the titular Dragonfire cards. These complicate the puzzle and one is drawn at the start of every phase, changing the battle. For example, a monster may heal one level of damage on their damage track for every damage it does to a player or the attack strength of one type of encounter is increased. These modifications definitely impact target prioritization! Unfortunately, if the scene gets back to the party leader, the Dragonfire card gets discarded (sometimes triggering ANOTHER effect) and a new one is drawn. As the Dragonfire discard pile grows, the effects it generates become more severe. I love this method of insuring the game moves quickly because if your party does not, the Dragonfire deck will…here it comes…burn you! HA!

Unfortunately, my biggest issue with Dragonfire was the pace of growth for characters. Outside of adding complexity modifiers to an adventure, which increase XP gain at the price of a more difficult adventure, five XP is the most common reward. Characters have six slots for stickers, but only one is open at the start of your characters adventuring career. The next slot costs… five XP. A third slot costs ten. Then there is the cost of the stickers themselves. Yes, you can overlay a previously purchased sticker for a discount of the cost of the sticker it is covering, but it will still take six successfully completed adventures to add a 30 XP sticker to my sheet. That is six hours of gaming, assuming the shortest time for each adventure… for one sticker. This can turn the game into a bit of an XP grind, rather than allowing the player to look forward to their next character upgrade.

Dragonfire is a game that we really enjoyed. It is a unique deck builder built around a truly entertaining puzzle to solve while including character building and development in the form of stickers and magic items. The theme, at least for me, only made Dragonfire more engrossing.

I highly recommend Dragonfire to fans of cooperative games, especially puzzle-like ones such as the original Shadowrun: Crossfire. I would not recommend this game if the puzzle aspect would be a negative or if you want your coop mechanics to be tied closely to the game’s theme.

Final Score:  4 Stars – A great reimplementation of a fun, cooperative card game that will have players working together throughout the campaign.

Hits:
• Highly cooperative gameplay
• Great use of the D&D theme
• Solid amount of replay value
• Building up and customizing your character

Misses:
• Felt like the XP gained was too low/slow
• Theme isn’t tied too closely to the mechanics