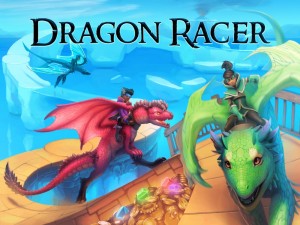 Dragons sometimes suffer from the bad reputation that they have built up over the years. Not all of them are evil hoarders who jealously guard their treasure – some are friendly sorts who just want to spread their wings and fly as fast as they can. Dragon Racer puts you in the role of a racer whose chosen steed is not of the four-footed type, but rather of the winged, clawed and breath weapon variety. Does Dragon Racer get the checkered flag, or is it left behind in its race towards the finish line? Read on to find out.

Dragon Racer is a card game where players progress around a racetrack through the drafting and playing of cards from an ever-growing draft pool to support a team of racing dragons. Dragons have an amount of support they need in order to move, and player hands are drafted to power their specific dragons, allowing them to move around the racetrack. As the game proceeds, players are able to upgrade to more powerful dragons that are able to move faster, but with a greater amount of support necessary. After 7 rounds, the player who progresses the farthest is the winner!

The game begins with the creation of the race course, the selection of the dragon riders for each player, and the initial assignment of dragons to each player. The “corners” of the course remain the same in all plays, but the “straightaway” sections will vary between plays of the game. Players are each assigned a specific racer with their own unique power that can be used during the race, and starting racing dragons are dealt randomly from a common starting pool of dragons.

During the Draft phase, a number of dragons are dealt out to every player, with the number of cards dealt increasing each turn as the game progresses. From this initial hand of dragons, players draft a single dragon card to add to their supply, then pass the remaining cards to their neighbor (going clockwise or counterclockwise on alternating turns.) Players continue to draft until all cards have been drafted by players.

The Score phase is where all the planning of the Draft phase is put into action. Player order (determined in the Set Up phase) allows the last place players to act first before the leading players. Using their drafted pool, players play dragon cards in ‘support’ of the racing dragons by matching up symbols on the racing dragons and support cards. When a racing dragon is fully supported, they ‘score’ by proceeding down the track at their specific speed value. Players can also swap out a racing dragon for a dragon out of their draft pool, which allows players to play more advanced and powerful dragons, or to plan and strategize for future turns. During this phase, dragons with special abilities are able to use them.

In the Track phase, dragons are able to move forward bonus spaces. Dragons are assigned “track types” and whichever player has drafted the most of each type of track gets to move further down the track, with the number of bonus spaces increasing as the game progresses. At the end of the Track phase, all cards other than each player’s racing dragons are returned to the common pool of cards for drafting in subsequent rounds.

The game spans 7 rounds, and at the end of the last round, whichever player has progressed the farthest is declared the winner.

The game is very straightforward, with rules that are quick to explain to players of all ages and levels of experience. With experienced gamers, explaining the game was even easier, as there are popular games that involve drafting mechanics (7 Wonders) and powering creatures through support cards (Pokemon) that are easily analogues for Dragon Racer’s game mechanics. It was determined that even though the expected game time is listed at 15 minutes per player, our plays found that the game plays a bit faster, at about 10 minutes per player. A cap on the number of turns also keeps the game play from getting drawn out.

All players are clearly engaged during the Draft phase, but during the Score phase, the game can bog down for players due to downtime. Even though the rules say that two sets of the game can combine together for an 8-player melee, this game seems to work best with 4 players, as it keeps the pace moving while allowing for a better game play experience. We found that this title, while very quick in terms of game time, is not recommended with two players, all the draft strategy ends up dissolving from the game, leading to a poor experience.

The reception of the game and game play can definitely change depending on the nature of the group playing the game. We found that this game appealed more to novice gamers and younger gamers, making this a definite choice for families who are looking for another title to add to their collection, or as a solid game to play as a warm-up at a game night before cutting your teeth on a heavy Euro.

Dragon Racer is a quick and enjoyable card game for all ages and levels of gamers. Easy mechanics and straightforward rules provide an engaging experience for a game that can hit your table in short order. This game works best with a family or group, so it should not be on your radar if you play primarily 2-player games.

Dragon Racer is currently in funding on Kickstarter. If you’d like to become a backer, a $29 AUD (~$25 USD) pledge will get you a copy of the game and any applicable stretch rewards. Since this game has already reached its funding target, work has already started on reaching those stretch goals. You can also find a Print-and-Play version of the game on the Kickstarter page. Dragon Racer is scheduled to be produced and delivered for August 2015, and you have until Thursday, December 11th to become a backer. Head on over and check out this game! 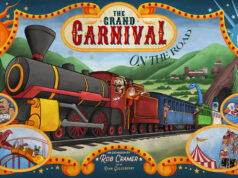