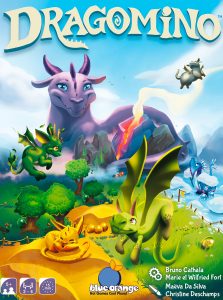 The annual Spiel des Jahres award is one of the most coveted awards in our hobby. It’s the German “game of the year” award and typically given to lighter, accessible games. The winners usually go on to sell LOTS of copies of the game, so you can understand why publishers love to win this one.

In addition to the Spiel des Jahres, the jury has also created two offshoot awards. The Kennerspiel award, which is for heavier games, more hobbyist games; and the Kinderspiel award which is for kids games.

Today, the jury announced that Dragomino (review here) has won the Kinderspiel award for 2021. The game was designed by Bruno Cathala, Marie Fort, and Wilfried Fort, and published by Blue Orange Games. It’s actually a reimplementation of the award-winning Kingdomino board game.

From the jury statement:
“Dragomino” is an impressive example of how you can turn a family game into a children’s game. This sister game to “Kingdomino” brings an interesting fantasy atmosphere to the table. Children will feel confident playing after just one game. The clever balance of luck and tactics means children will always want to dive into the world of the domino dragons.