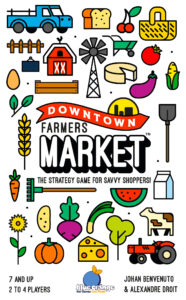 It’s a late June morning and the sun is shining, the birds are singing, and it’s the perfect morning to head off to the farmers market. Time to stock up on some local cage-free eggs, artisan cheeses, and maybe even a soft pretzel if you are lucky.

Publisher Blue Orange Games has made a name for themselves by putting out a large variety of family games that can also appeal to the hobbyist crowd: See Kingdomino. This time, it’s a tile-laying game called Downtown Farmers Market. You and your fellow players will be heading to the market to try and complete various challenges. Designed by Johan Benvenuto and Alexandre Droit, Downtown Farmers Market takes about 20 minutes to play.

Downtown Farmers Market plays anywhere from 2-4 players with only slight rules changes for under four players. Each player starts the game by being dealt eight challenge tiles. They will then choose whether they’ll use the hard or easy side of each tile and positing them in an “L” shape.

On a player’s turn, they’ll draft a tile from the market and place it anywhere in their 4×4 grid. There are no placement rules requiring tiles to touch previously played tiles, so you are free to drop a tile “floating” in the middle of your grid if you want. If you are playing with less than 4 players, you might also need to discard a market tile to the box. No matter the player count, you’ll always start the drafting round with 5 tiles to choose from.

After every player has placed their 16th tile, the game ends. Players will score points based on how and if they completed their objectives. Each row and column of a player’s grid is scored based on its objective. These range from having so many of a specific ingredient, to majorities, to wanting different ingredients. Whoever scored the most points is the winner.

Despite its simple ruleset and cutesy art, Downtown Farmers Market has a lot going for it. First of all, it works great as a family game. The hardest thing to explain is how each of the objectives works. But the best way to start is just by playing on the easy side of those tiles. Those tiles definitely have requirements that are simpler to parse.

But once you have a game under your belt, you should definitely add in the other side of the challenge tiles. Not only do these have much more interesting goals but choosing which side of a tile to use during setup is also part of the strategy in the game. This isn’t like other games where players decide on “Side A or B” and follow suit. You’ll evaluate each challenge tile individually before you place it. This is important because having conflicting goals next to each other can hurt your score.

The other interesting thing about Downtown Farmers Market is how the gameplay changes based on the player count. Well not the gameplay so much, but the mood of the game. At four players, it’s a pretty simple tile drafting game. You’ll choose the best tile on your turn for your objectives. With only 16 tiles, drafting is way too tight to waste a draft on a tile that won’t help you.

But with 2 players (and three to a lesser extent) players will be tossing tiles back in the box. This allows you to hate draft (the term for drafting a tile that doesn’t really help you but hurts your opponent) without impacting your score at all. With four players, it’s also harder to keep an eye on what everyone needs, but at 2, you can easily peek across the table and see that your opponent is really looking for a carrot, so may as well toss that tile back in the box. Sure, you can both decide not to play with this strategy, but it almost always happened in our games.

Downtown Farmers Market is a fun tile drafting game that’s not as casual as its pleasant demeanor suggests. Sure, it makes a great family game (and it even has lighter rules for playing with more inexperienced gamers), but it can also have a mean streak if you are playing with only one other player. But no matter the player count, we still found it to be a solid market game that will force you to make lots of decisions in a tight drafting window.

Final Score: 3.5 Stars – From casual to cutthroat, Downtown Farmers Market can appeal to a broad range of market game fans.

Misses:
• Probably doesn’t have a ton of staying power
• 2 Player games can get pretty mean