We review Dominations, a civilization-themed game published by Holy Grail Games. In Dominations, players are trying to build an empire to stand the test of time. 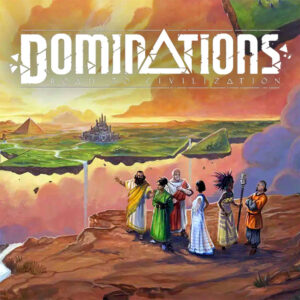 Dominations: Road to Civilization sat, still in shrinkwrap, on the table between us. I looked Tony straight in the eye. He stared back. After this went on for FAR too long, I broke the silence with the following query:

I grabbed the game and went home.

Dominations: Road to Civilization is a tile placement/area influence/tech tree building game where two to four players try to grow their primitive tribe into the world’s most powerful nation. Game length varies greatly, from an hour (2 player, very experienced, little AP) to three hours (more players, new players, and analysis paralysis issues). For this review, I played with two and three players. I would never play this game with four.

A game lasts 3 ages, with each player having five turns in each age. A turn consists of three phases:

The game ends after the third age is completed. After final scoring, the player with the most points is crowned the winner. Bonus points if monarchy is in their civilization tree. I’m joking… because they were “crowned”… if they had monarchy… monarchies have kings… kings wear cr-… ah, nevermind.

Ok. Now that I got that out of the way, this game, with the right crowd, is a very entertaining game. I thoroughly enjoyed the puzzle aspect of the game, especially land tile placement and the civilization tree.

Maximizing land tile placement is crucial in generating Knowledge to spend on building cities and growing your civilization tree. Building cities increases the reserves of Knowledge you can store so you can afford more expensive cards later in the game. Also, when establishing a city, any future tiles connected to your city will generate you a bonus. This adds a second strategic layer to tile placement. Trying to place a tile to gain the most knowledge while also making sure my city will score bonuses in future rounds.

The civilization tree provides difficult decisions. There are 72 mastery cards (12 for each of the six colors), all of which provide a unique bonus. To place a tech, it also must match the nodus (node) of the card it is attached to. Each tech has four different copies (same bonus, but the noduses?… nodesi? Errr, nodes, are all the same color but on different edges of the card) so that the first player to develop a mastery card will have the most flexibility in adding it to their tree. Shockingly, you can only develop each technology once. Developing the wheel four times is not needed to invent the automobile.

If you don’t want to, or cannot, develop a new mastery card, you can always upgrade an existing card, paying its knowledge cost and flipping it to its more powerful side. This works well if you have a decent engine going in terms of a well synergized tree. But this is another option players must consider…

Which brings us to the second issue I see with this game. This number of options available to a player, between laying tiles and their civilization tree, can be overwhelming. This will be the biggest weakness for most players who do not enjoy the game. Each player will have seven… yes, seven player aid cards, with six of them being double-sided. These are needed as each of the six mastery card aids has the normal 12 techs on one side and their upgraded forms on the other. They also list the four node colors on the card. This sounds great, but if this is the third of the same tech being built, the player has to a) find the two remaining tech cards, b) see if they fit their tree, and c) start over if they do not.

This is where AP issues will turn some players off. There is a lot to consider every time you take an action. This game works well with people who want to build up their engine fast but aren’t looking to maximize EVERY. SINGLE. ACTION. Perhaps a sand timer or clock could be used to expedite slow decision-makers? This is also why I refuse to play with four players. In my group, it would simply take too long.

I am not going out on a negative. I haven’t even touched on the monuments, which add quick scoring opportunities and additional cards for your Tree, or the 16 objective cards (each player is given two and chooses one) that can help steer some of your strategies and, hopefully, help mitigate some AP. The replay value is amazing. There are SO many options. No game plays the same. I just wish they usually did not take so long to play….

Dominations is a great puzzle game for people who are not looking to maximize their options every single turn. There are plenty of puzzle elements to enjoy, between laying your tiles and building your Tree. Unfortunately, it can be marred by serious AP issues if players do not make quick decisions. Finally, do NOT buy this if you are looking for a civilization-like experience. This is NOT a civilization game. That being said, I enjoyed it for what it is.

Final Score:  3 Stars – A unique puzzle game dressed up as a civilization game.

Misses:
• Analysis paralysis can ruin this game
• More fun with more players, but more players dramatically increases playtime
• Pasted on theme – this is not a civilization game