We review the Detective: Dig Deeper expansion from Portal Games. This expansion for Detective: A Modern Crime Board Game sends players back to the 1970s to try and solve a mystery. 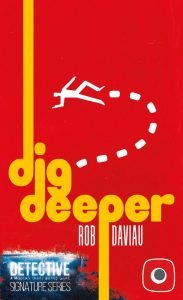 For those looking to recreate the experience of being a wise-cracking detective from the TV show Law & Order (or insert the name of your favorite procedural cop drama here) Detective: A Modern Crime Board Game is an excellent option. It won our BGQ Award in 2018 for Best Cooperative Game and Most Thematic Board game.

We already covered the first expansions, LA Crimes—a 3 part expansion set in 1980’s Los Angeles. But Portal Games decide to branch off with new expansions for Detective in the form of Dig Deeper, a one-shot expansion from veteran game designer Rob Daviau (Risk Legacy, Downforce). This time, players are taken to Boston in the 1970s (or Bah-stan if you are channeling your inner Departed).

While not technically a stand-alone expansion, Dig Deeper does provide new lead cards, new characters, and even a new game board of the Boston area. If you’ve already traded away your copy of Detective, you can still play this one if you are comfortable proxying a few tokens and are familiar with the game system.

What’s new in this expansion, other than the case in general, is the change to the Antares database. Since it’s set in the 1970’s, there is no internet to browse. If you want to look things up about the town and characters, you have to call the library and ask a librarian to do some research for you. After 4 hours, she’ll give you the facts she found.

The other change is to the interview system. Instead of just reading the transcript of an interview, you are giving a command prompt to enter questions. Put in the right words and the suspect will tell you what they know on the topic. However, you are usually limited to three questions before the suspect gets annoyed and leaves. I guess no sweating the perps for 12 hours under a hot spotlight in this one.

For those familiar with the base game, Dig Deeper follows the format more of cases 1 and 2 versus case 3. I won’t spoil the plot for you, but you’ve got only four days to solve the mystery. You’ll be trekking all over Boston talking to quite a few different people. Overall, I found the story intriguing, even if I was never able to fully connect all the dots. Fortunately, I was able to “use my gut” to answer most of the questions right at the end. I think, given the time allowed, I probably was able to see about 50% of the cards in the case before I ran out of time. I actually thought the time limit on this one was a bit too tight and would have liked an extra day to wrap things up.

For the Antares changes, I thought the librarian system was a clever way to get info on people and locations before the internet. You were allowed to ask as many questions as you like in one session without any extra time cost, which was nice. The database also keeps track of the responses so you could revisit the answers later.

However, I was not a fan of the interview system in the new Antares…at all. I found it to be really fiddly and way too limiting. The max of 3 questions felt like an arbitrary limitation and stopped me from trying to get all the information I needed. And what’s worse, is that if you spelled something wrong on accident or used the wrong words, the suspect just said they didn’t know anything on the topic and ticked off one of your allotted questions. There were times I wanted to flip the table after dealing with that system. Overall, I’d be happy to never see the interview system again in Detective, short of a complete overhaul of it.

Dig Deeper had a solid story and was a pretty tight case overall. Almost every card has some kind of useful tidbit on it, which made it feel like there were a lot fewer red herrings in this one. I even went back through the cards after I was finished to see what I missed. However, the new Antares database was a big miss for me. I wasn’t a fan of the interview system at all and I look forward to the Detective series returning to the modern times in the future (hopefully).

Hits:
• One-shot adventure that can be complete in one session
• Tight case with an intriguing plot
• Could technically be played as a stand-alone expansion

Misses:
• The interview system sucks
• The time limit feels a little too tight