We review Desktop HEBOCON Battle Kit, straight from the shores of Japan, this language independent game will have you constructing "crappy robots" and having them battle each other in the arena. 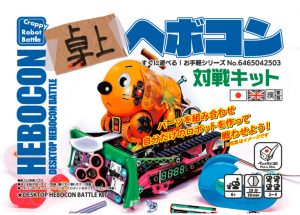 In March, I attended Dice Tower West in Las Vegas to meet my favorite people in the board game community. I’m used to playing very long and heavy eurogames at these types of conventions, so it was a nice break to play some prototypes and shorter games. Thanks to Eric from What’s Eric Playing, I was able to play some Japanese independent (doujin) board games with the owners of Big Cat Games. Their company mission is to help take off, or at least lower, the language barriers in Japanese independent games. Desktop Hebocon Battle Kit, also known as “Crappy Robot Battle”, was the most notable. When I got back from the convention, I bought my own copy from them and delighted my gaming groups.

Hebocon is a tile placement and fighting game for 2-4 players that takes about 30 minutes to play. The best experience is with the maximum player count for maximum chaos.

In Hebocon, you collect polyomino robot parts, build your robot on your player board, and then battle other robots in the arena. Someone places the part tiles around the battle board, and players can choose parts that are up to four tiles away from their robot figure. Eventually, everyone will have a stack of 9 tiles and one minute to arrange them on their player board.

When the time is up, robots are evaluated for “crappiness” and are deducted points for empty squares. But be careful: a high-tech robot, or filling in all squares, is an immediate 8-point penalty.

After evaluations are completed, robots fight in the battle board. Players take turns placing metal nuts on their parts tiles to take the corresponding action. Tiles, for the most part, will be 1) robot movement, 2) points, or 3) player board rotation. Robot movements can push themselves and/or other robots around the board and even off the edge!

The game ends when either one last robot is standing in the battle board or everyone is out of actions. Final points scale from how many robots are still on the board. Then the player with the most points wins the game!

To be clear, if you want complete control over every aspect of your gaming experience, don’t play this. However, if you’re open-minded, need a filler game, and are willing to devote 30 minutes to absolute chaos then this is the game for you. I’m not very talented with polyomino tiles, and I’m discouraged whenever I lose in a longer eurogame.

The same thing happens in heavier fighting games; it is incredibly frustrating to have all my efforts thrown out the window. Hebocon is a breath of fresh air because if you have issues with these types of games – like me – it’s just the right amount of time investment and brain space. In fact, this game is so accessible and so short that I’ve played this at least 3 times in a row in the same session. This game helps you realize “This time, I’ll get it right, and even if I don’t, I had the absolute best time doing a bad job”.

Learning how to focus on types of actions on tiles to be able to fit on your board is one of the best parts of this game. Since it’s near to impossible to figure out how you’ll fare against the robots your opponents are building, you’ll enjoy the building process the most. Hebocon is based on the “robot sumo-wrestling competition for those who are not technically gifted” and it becomes clear that you and all your opponents absolutely qualify.

Just like most fighting games, the more opponents to trample the better! While the game does have a different setup for two players, it doesn’t have quite the same feel or enjoyment as having at least 3 on the battlefield. So if you’re just itching to play, it’s doable at two but not my favorite. The metal nuts that come with the game are charming, and the art is just as kooky as the gameplay.

The moment you place your robot on the battlefield, you wonder: “How am I supposed to stay alive in this nonsense?!” When you look at your board you realize the answer to your question is: “You won’t”. Yet are you still amused by it? Without a doubt, YES. For example, I spent one of my games just turning my player board around in circles. Guess what? I still ended up winning without moving my robot and it was hilarious.

Yet not everything about this game is perfect. During initial setup when you’re choosing what tiles to pick, it’s hard to work with the luck of how the tiles were laid out. It is possible to win by solely using point tiles, but this can frustrate everyone at the table. If you’re eliminated by your own mistakes or other robots, you’ll be on the sidelines waiting for the game to be over. So if you’re someone who doesn’t like being in the audience, you won’t enjoy the player elimination aspects of this.

Desktop HEBOCON Battle Kit is for those looking for a silly filler game or even an ice breaker at a new game night. While this tile placement and fighting game is not technically categorized as a “party game”, it’s not a cutthroat strategy game either. Most of the strategy is in the robot building process and then action programming. Be open-minded about the fighting and love it for what it is: a Crappy Robot Battle.

Misses:
• Impossible to anticipate how you’ll do
• Possible to win with just point tiles
• Player elimination may not be enjoyable

About the Author: Michelle Ridge is a Polymath. Jill of all Trades. Geek. Heavy eurogames enthusiast on The Tabletop Crier, Cruel Quizmistress of “What Did Bunny Play?”, and amateur photographer of food, travel, and boardgames on Instagram.