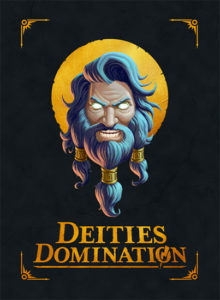 You are a God. Your people are yours to guide, spreading followers and your legend across the world. Explore new lands, battle monsters, and command tributes from other tribes. Your choices determine the fate of your people.

Deities Domination is an area control, resource management game for 2-5 players that takes about an hour to play (depending on number of players). It plays best with four to five players.

The object of Deities Domination is to increase your tribe’s glory and area until you’ve earned the target victory points. VPs are earned by building villages, shrines, and other buildings, defeating monsters, and gathering tribute from other players.

Each player starts by selecting a god or goddess. Each deity has a couple of special abilities that will effect game play and likely determine the strategy they use throughout the game. The board is randomly generated by placing grasslands hexes together. Players receive base action cards and god power cards, then place two starting villages on the board.

On a turn, players start with the option to purchase tribute. Tribute may be used to pay other players later or to decrease the number of points needed to win the game. Then they have a choice of actions: playing/discarding cards from their hand, building, battling monsters, or trashing cards.

Card powers are generally used to gain resources, move heroes, and expand the boards. As more cards are earned through building, they may have even better acts for the player’s tribe or malevolent acts they can perform against other players.

Buildings give a variety of benefits. In addition to earning better cards to be played later, they can be the spot new heroes emerge from, reward more VPs, provide more dice for battles, or generate tribute. Only one building can be placed in an area, so players will spend a lot of time vying for building spots.

Successfully defeating a monster awards victory points. Players enter the lairs at particular points on the board. For each castle a player has they’ll roll one die, aiming to roll higher than the monster’s target strength. While a player won’t lose a hero in a battle, they hero is locked in combat until their battle is won. Once a monster is defeated, the player is given VP based on the creature’s strength and can return to moving around the main board.

A combination of strategy and a little luck will help make your Deity the most powerful in the land.

Deities Domination plays best at maximum player count – at its heart the race for expansion and glory is cut throat and quick. Players vie for the same position, jockeying for good building spots, racing to defeat monsters, and expanding quickly to collect tribute from other players.

It is part deck builder, part resource management, and part area control. It has a nice balance that plays to different strengths. Deck building and management is of supreme importance. The ability to generate resources and block your opponents will decide the game, so getting better cards quickly and hand culling is a huge part of keeping the VP generation going. Area control can help generate bonuses quickly and more competitive types may find undercutting their opponents is a big part of their strategy. And a little monster hunting can be a great boost of VPs if you’re struggling to keep up in the building game or your hand is suffering.

The board artwork is clear, and symbology helps identify potential roadblocks or benefits. Symbology on the action cars is also well conceived, and what you can do with a card is pretty apparent based on the image.

Most of all its a game about balance – the god that puts the most thought into expansion, building, resource management, and war will come out the victor.

It’s hard out there for a God. Guide your tribe to glory and ultimate power while building great works, stymieing your opponents, and defeating powerful monsters. Deities Domination is a fun civilization builder for those looking for a mix of game mechanics who don’t want to take a literal age to play.