We review Deadline, a new hand management and mystery solving game published by WizKids Games. In Deadline, players must work together to solve a murder mystery in this film noir style card game. 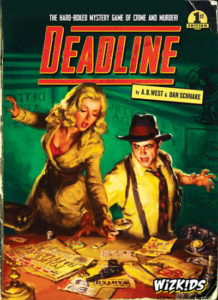 If there is a genre of movies that I would love to skyrocket back into the limelight, it has to be the film noir style. They way they speak, the cinematography, everything really, it just is able to grab my attention and never let go. So when I saw that WizKids Games was creating a detective game based on this style, I was ready to dive in.

While I was tempted to write this entire review in a film noir style of detective speak, I’ll spare you my lame attempt that would probably have ended up being more annoying than entertaining. You’ll have to settle for my regular voice as we investigate Deadline, a hard-boiled mystery game of crime and murder, designed by Dan Schnake and Adam West (Ninjato).

Deadline is a hand management, mystery game for 2-4 players that takes about 45-60 minutes to play. Deadline plays well at all player counts.

Once a case is chosen and each player has their detective card, they are ready to begin.

After reading the case description (usually a murder that needs to be solved), a number of clue cards will be accessible to the players. The current “chief detective” then chooses a clue card to begin the round. Each clue card will contain a number of symbols that must be matched to successfully reveal the backside of the clue.

Starting with the Chief Detective and proceeding clockwise, each player MUST take one action on their turn.

The main action is playing a lead card from your hand. Every lead card has 2-3 symbols on it. After the first lead card is played, each additional lead card must overlap one or more matching symbols on previously played cards. Once enough lead cards have been played so that all symbols required by the clue card are showing, the round ends and the players have successfully investigated the clue.

Some lead cards will also have a matchbook showing on them, that will activate hot tip tokens. As an action, a player can spend 2 or more matchbooks to draw cards or remove active “plot twists”. Finally, a player can also use their detective ability as an action (once per game).

After successfully investigating a clue, the players flip it over and read the text on the back. This will usually reveal more information about the case and potentially new leads to follow.

Once players have read or lost all of the clue cards, the game ends and they must answer questions about the case (usually who dunnit, why, etc…). Their score is based on how many questions they got right and how many times they failed a round.

I have played through half of the cases in Deadline (12 in total) and so far, everyone has loved the game. To be honest, I wasn’t sure what to expect. Deadline almost feels like a mashup of The Grizzled’s style of cooperative hand management with Sherlock Holmes Consulting Detective’s (SHCD) investigative gameplay. And, as I love both of those games, I’m absolutely OK with it because it works REALLY well in Deadline.

The icon matching element of Deadline does a good job to help break up the gameplay and add a bit of tension to the game. I think had this just been a lighter, card based, version of SHCD, it wouldn’t be as interesting. But games of Deadline can actually get pretty tense, especially once you get near the end. Then as you followed the leads, the clues get more important to the overall mystery, yet the symbols are also harder to match. This is especially true when you have multiple plot twists working against you.

I could definitely see Deadline running into some quarterbacking issues if players ignore the game’s rules about table talk. The rules specifically state that you can’t discuss the exact contents of your hand or suggest different placements of cards. Both are necessary rules that not only prevent quarterbacking, but add to the enjoyment of the game.

In our groups, we’ve taken our table talk to a more thematic level and had a ton of fun with it. Instead of saying “I have 3 cigarette icons in my hand”, we’ll announce that we’ve recently taken up some heavy smoking. While another player might say that they quit drinking if asked how they are set for whiskey glasses. If your gaming group would enjoy this kind of thematic talk, you can have a ton of fun playing Deadline.

While I haven’t played them all yet, the mysteries themselves are the real star of the game. Each one has a unique angle and my groups have really enjoyed trying to figure them out. The fact that they are slowly revealed over the course of the game will lead to some “ah ha!” moments as you get that one vital clue that breaks the case wide open.

I will say that some cases will stretch a little bit with their reasoning. Without going into spoilers, a few times we’ve looked at each other at the end in puzzlement when the game makes a connection that we just didn’t see presented to us. But that’s only a small annoyance in an otherwise fun experience.

But for the most part, solving the cases works in a logical progression. While some clues will be dead ends, others will be linchpins that blow the whole thing wide open. In fact, since each clue is on a card, I really have been thinking about adding some colored string to my game so I can link up cards like you see on the detective boards in tons of TV shows. It’s gonna happen and would look awesome.

To be honest, I don’t have much to complain about with Deadline. Solving the cases are fun and the game play works well with the hand management mechanics. If I had a gripe, I wish there were a couple of shorter cases. Most cases will take about an hour to solve, and the accessible nature of the game make me want to bring it out with family and other non-gamers. However some just don’t have the attention span for a longer game, so I’d love a “quick mysteries” expansion pack.

Deadline has throughly entertained ever person I have brought it out with. The hand management aspect worked rather nicely when paired with the mystery solving, as it offers a nice break from trying to figure out who dunnit. And the plot twists definitely helped to keep the tension high in the game, with optional ones to add in should you find the game too easy.

If you haven’t figured it out by now, the nature of Deadline is one and done style of game play, so after you’ve played a case, you can’t really go back and play it again. Yet with a dozen in the box, I feel like Deadline does provide a substantial amount of game play for your dollar. I defiantly hope WizKids plans on keeping this game going as I’ll be first in line to get any expansions they produce.

Deadline was a complete hit for me and more than once I’ve introduced the game to someone and they’ve immediately wanted it play it again afterwards. If that’s not a high recommendation for a game, I don’t know what is. If you are a fan of film noir crime movies, mystery solving, or even just fun, Deadline should be in your gaming collection.

Final Score: 4.5 Stars – A great, thematic game that will have you working with your friends to solve a variety of cases.

Hits:
• Nice variety in the mysteries
• Hand management works well to break up the mystery solving
• Scalable challenge by adding in optional plot twists
• Comes with a dozen cases to be solved

Misses:
• Wish there were a few quicker cases.