We review the new cooperative board game Dead Men Tell No Tales by Minion Games. In this pirate game, players must work together to loot all the treasure from a sinking and burning pirate ship. 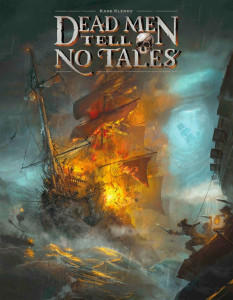 There are a few themes in gaming that no matter how much they are used (or overused), still seem to attract my attention. Cthulhu, dungeon crawling, city building and of course pirates. Who doesn’t love a good swashbuckling board game?

In Dead Men Tell No Tales, players will be working together to quickly loot a burning ship. Each player will control a unique pirate, each with their own special ability and shared group of items. During the game, players will use an action point system to move around the ship, fight deckhands and guards, loot treasure, and battle the raging inferno. If the players can recover all treasure before one of the games many end conditions happen, they can retire as rich buccaneers.

Overall I was really happy with the components in Dead Men Tell No Tales. The cards, tiles and tokens are all made from high quality stock that should garner no complaints. While Minion Games doesn’t publish a high quantity of titles, the ones they do release are usually well produced.

My favorite aspect of the components has to be the artwork. From the inferno on the ship tiles to the well drawn pirate cards, I found the artwork to be both thematic and engaging. The artwork was not only visually pleasing to look at, but also done in a way where it doesn’t interfere with actually playing the game. Props to illustrator Chris Ostrowski on a job well done!

For the most part, the rule book did a good job explaining the nuances of the mechanics and made learning the game easy. There were a couple of areas, mostly with the revenge cards, that could have been more clear. A quick jaunt online cleared up any questions we had.

Here is a quick overview of how to play. If you want the full rules, you can download a PDF of the rules here.

The goal of the game is to find and recover all the loot tokens from the ship. This will be anywhere from 4-6 tokens depending on difficulty level and player count.

At the start of a player’s turn, they search the ship. Searching involves drawing the top tile from the pile and adding it to the ship. Doors must be placed in a logical manner, and a token is drawn from the bag and added to the tile. A die is also placed on the tile (usually starting at a specific number) to represent the fire level of the room.

Players have 5 actions to choose from:

If you ever move into a room with an enemy, you must immediately fight (not an action). This involves rolling a die and adding the result to your battle strength. If you roll equal to or greater than the strength of the enemy, you kill him.

Finally, at the end of your turn, you must draw a Skelit’s Revenge Card. This will cause various bad effects to occur, including raising the fire level in all rooms with a matching die or adding more deckhands to the ship.

To win the game, players must find all the treasure tokens and remove them from the ship and escape.

There are 6 ways to lose the game:

Even though Dead Men Tell No Tales seems to borrow concepts from those games, I still feel like it’s different enough to stand on its own. One mechanic I really enjoy is the way the fire is handled. Each room has a die that signifies its fire level. If that die ever reaches six, the room explodes while destroying everything in it. Furthermore, the fire in all adjacent rooms are increased by one. Some rooms even have powder kegs that will explode on a lower number.

So the obvious move is to always be lowering all the fire levels, right? Well not necessarily. When you draw the Skelit Revenge cards at the end of your turn, some will have you increase all the fire dice matching the drawn number by one. So if you’ve been working really hard and lowered half the dice to a 3, well now all those dice are increasing by one. It almost behooves you to keep your fires at different levels to avoid something like that from happening.

Besides, chances are you won’t be able to spend that many actions fighting fires. There is just SO MUCH to do in Dead Men Tell No Tales. From fighting guards for treasure to keeping the deckhands in check, you will never lack for things to do on your turn. Even resting becomes an important action. As you become more fatigued, you start getting locked out of rooms with high fire levels. There is a great give and take nature to this game. I feel like I’m constantly trying to keep 20 different plates spinning at the same time.

With all those demands on a player’s actions, it really made me enjoy how there are quite a few ways to lose. This forces players to balance out their actions and not just focus on a few. I’ve lost Dead Men Tell No Tales in a couple of different ways, this game can really keep you on your toes, especially at the harder levels.

The deckhands will be one of the bigger thorns in the players sides. We actually had more issues keeping them in check than the fires. This is especially true after the ship has had a many tiles added to it. In fact, one of our players likened the pirate Jade to the medic in pandemic. We almost feel like you have to play with her because her ability is so useful! (She can kill 2 deckhands with one action).

I feel like that many of the characters have a role to play in Dead Men Tell No Tales. Something to be aware of when you get your pirate because if you don’t enjoy fighting fires, you probably don’t want to be playing Crimson Flynn. While some pirates abilities are fairly general, many have roles that almost turn them into specialists.

As much fun as we had playing Dead Men Tell No Tales, it still can fall into the same pits as other cooperative board games. Namely having to deal with an alpha player directing the game. There is nothing that can stop that in the game, but you know your gaming group better than anyone, so if this is a regular problem within your group, be forewarned.

Finally, Dead Men Tell No Tales does a decent job with its player scaling. I tend to prefer the game with 3 players as I feel like I have a bit more control over the board and the downtime is a bit less. At the higher player counts, things can get a little chaotic as the game state changes so much between your turns.

Dead Men Tell No Tales ended up being a fun cooperative board game that’s already made it to our tabletop a few times. Because there are so many things to do in the game, I feel like it almost has a puzzle nature to it. The game is not easy to win and will definitely offer up a challenge. Expect to lose this one in the beginning, especially when playing on the harder difficulty levels.

If you are a fan of all things pirate, then you will definitely want to check out Dead Men Tell No Tales. It has some solid mechanics, excellent production quality, and is overall an entertaining cooperative board game. While it doesn’t feature any ground breaking mechanics, it does a lot of things right and is worth a spot on your gaming shelf. Check this one out today.

If you’d like to grab a copy of Dead Men Tell No Tales, you can pick it up for about $40.

Final Score: 4 Stars – A fun romp through a burning ship that combines a lot of solid mechanics with some challenging gameplay.

Hits:
• Great production values
• Challenging gameplay
• Fun take on the pirate theme
• Lots of things to do on your turn

Misses:
• Nothing to stop the alpha player syndrome
• Top of the player count can get chaotic 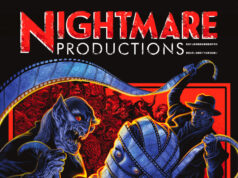