Owing to this struggle for life, any variation, however slight and from whatever cause proceeding, if it be in any degree profitable to an individual of any species, in its infinitely complex relations to other organic beings and to external nature, will tend to the preservation of that individual, and will generally be inherited by its offspring.

-Charles Darwin, On the Origin of Species, 1859 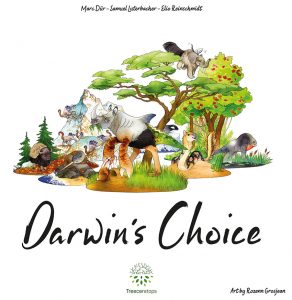 We previewed the prototype for Darwin’s Choice by Treeceratops Games back in May 2018 for its Kickstarter campaign. As a prototype, the game was beautiful, the rules were complex, and the theme was given the treatment it deserved. Now that the game has been released (and has an upcoming Kickstarter for an expansion), we’re conducting a full review of the base game to help you decide if it’s worthy of a next-step expansion treatment.

Darwin’s Choice is a card based, evolution themed, creature building game where players evolve or migrate their species in response to the demands of the biomes or environmental events. Darwin’s Choice is for 2-6 players and takes about 45 minutes to play. It plays best with 2 or 6 players

A player wins Darwin’s Choice by having the most Darwin Points at the end of the game. The game is set up with several card decks (Animal Cards, Event Cards, Continental Cards, and Biome Cards) and four Biomes in the middle of the table. Each biome has minimum requirements (climbing, speed, etc.) for the species that (will) reside there.

There are four rounds in the game and each round is divided into three phases.

In the Action Phase, players build up their hands and create or mutate species; or migrate species in an environment where they are sufficiently adapted.

The Evaluation Phase has players verify if the environmental requirements of the biomes are met and ultimately die off, eat, or be eaten. Unsurprisingly, food availability is limited in different biomes and food eating order is resolved in decreasing order of adaptiveness. Species that survive this process are awarded Darwin points as are those that are most adapted in a biome and those that are the most adapted across all the biomes.

The final phase is the Transition Phase where the playing field is shaken up. Event Cards, Continental Cards, and Biome cards are pulled from the central deck and resolved. Food is then redistributed for each Biome as they have been altered (if not changed completely) and species again receive food in descending order based on how well they are now adapted to the new environmental requirements.

Darwin’s Choice attempts to tackle the complexity of evolution on (probably the majority of) your gaming table and it really delivers. The central mechanism of the game is, like other similarly themed games, playing cards to create, migrate, and evolve species. Everything else in the game just motivates and informs these actions. At face value, this is not all that revolutionary. However, the actual implementation of these decisions is quite unique.

There are 250 Animal Cards and each Animal Card has a different animal body part on it, the food cost for this extra appendage, and the adaptive benefit a creature receives for different environments. These body parts also have little white dots where they connect to other body parts, called Docking Sites. Heads, legs, and tails only have one docking site, but depending on the size of the body, there can be anywhere from two to five docking sites. Since there is no penalty for “open” docking sites (each animal must have at least a head and a body), the sheer number of possible species is really quite impressive (no, I won’t do the math).

On the table, what ends up evolving in front of players is something akin to those spiral-bound monster flipbooks you may have had growing up.  Maybe it’s just me, but even though the addition of body parts required additional food requirements for the species, I had a tough time leaving docking sites open and not giggling like a child as I took my turn and watched my opponents take theirs. Put a shrimp head on anything terrestrial and YOU try not to laugh. Usually, this many laughs during a game implies something lighter with minimal strategy or complexity, but that isn’t the case at all here.

The Event Deck and changing Biomes encourage more tactical gameplay at points, but players aren’t necessarily forced to abandon whatever long term plans they had assembled in their hands for the survival of their species. The Event Deck is made up of both Instant and Permanent effects, so even though the landscape is always changing, it is not fruitless. Relatively large hand sizes (10 cards), players can hold onto both short term adaptations to let their species survive and also increase plan on increasing adaptiveness to maximize their Darwin Points.

All of this is to say that Darwin’s Choice is an intelligent, complex, and most importantly fun foray into the evolution themed tabletop game. The artwork is beautiful; the game design is fun, intelligent and streamlined; and to top it off there is tons of replay value.

In Darwin’s Choice, the balance between the tactical and strategic decisions that players must make do not feel repetitive or as manic as other implementations of similar mechanisms. There is a learning curve, but the theme lends itself to the game design (and vice versa) making this an easier first play to introduce entry-level gamers to than most medium weight games out there.

Not much has evolved (or needed to evolve) from the prototype we previewed before Treeceratops’s last Kickstarter. I loved the game then, and I still love it now. If you, like me, enjoy the evolution theme, making monsters, or the flipbooks of yesteryear, Darwin’s Choice deserves your time. Just make sure you have the tablespace.

Misses:
• Definitely a table hog. Gameplay can suffer on a condensed play surface

Treeceratops has another Kickstarter campaign starting November 5th for the expansion to Darwin’s Choice named “Before and After”. In this expansion there are 240 new animal cards which include dinosaurs, prehistoric species, and endangered species. Also included on the Kickstarter is an encyclopedia that contains information about the animal species in the game. Better still, the entire game production will be carbon neutral. Check out their Kickstarter for more details as to how you can support great developers and a great cause!