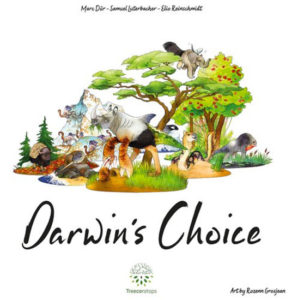 When it comes to theme, tabletop gamers typically have an opinion somewhere on a spectrum from 0 to 100. On one side is the opinion that theme doesn’t matter and mechanisms are paramount (hello, Eurogamers). On the other side is the story told at the table is what makes games memorable (bonjour, Role Players). Recently, this paradigm has made itself obvious to the BGQ Crew when a science based theme is applied to a game (see Alex’s Cytosis review for more on that front). Sometimes, though, theme and game mechanisms strike that delicate balance where the stories told at the table align with the actions taken by the players. Darwin’s Choice, debuting on Kickstarter May 8th, satisfies on this front.

Darwin’s Choice is a card based, evolutionary engine building game where players are tasked with playing cards to build species that are well adapted to continuously changing environments and have a competitive advantage over their opponents. Darwin’s Choice is a card game by Treexeratops for 2-6 players that takes about 45 minutes to play. It plays best with 3 or 4 players.

The object of the game is to have the most Darwin Points (victory points) at the end of four rounds, each of which are divided into three phases.

The phases are as follows:

During the Action Phase, players build new species, mutate species or migrate species. Cards can be traded, but only one action (build/mutate/migrate) can be chosen. The key here is that species must arrive in an environment already adapted for it. Each environment has minimum requirements (climbing, speed, etc.) for the species that reside there.

During the Evaluation phase, species die, eat, and are eaten. Conversely, species that do not meet the requirements of an environment die out immediately in this phase. Environments provide a limited amount of food for the species that reside there and species eating order is resolved by evaluating how well adapted the species are to that environment (adaptiveness). At the end of the round, the more fit/successful species are awarded Darwin points.

Finally, in the Transition phase, events occur and environments change. This happens randomly based on the cards drawn. Since, by altering an environment the available food is changed, species receive food in descending order based on how well adapted they are to the new environment.

There are several evolution themed tabletop games on the market (one specific line of games I have reviewed comes to mind). While those games are good at having players evolve their species into more wild and strangely adapted species to more directly compete with one another, they are not very good at relating the fitness of the species to their environment. Darwin’s Choice changes that. Every adaptation comes at the cost of some aspect of fitness in another. Likewise, similarly adapt species end up preying on one another if they are unable to migrate to a more conducive environment. As far as evolution simulations go, this is much truer to form than similar forays.

When the game is on the table, perhaps the most striking part is just how the species are constructed from the cards. Specifically, the use of “docking site” to place legs, heads, bodies, etc. is very reminiscent of the flip books and building blocks from my childhood. This use of docking sites to play cards is ingenious. These body cards are balanced against the environmental adaptations they provide with special abilities, food cost, competitive advantages etc. For example, environmentally less adaptive (like low running effectiveness) set of legs may also grant competitive strength (for scoring). I am a big fan of this. While this genre of card driven evolution game is typically (always) about engine creation, this is the most balanced and creative I have seen.

I thought that the randomized environmental changes and events would feel, well, random. I was sure this aspect of the transition phase would lead to a lot frustration around the table. Truth be told, randomized is, in fact, random (surprised?), but it is a great motivation to build slightly specialized, environmentally well adapted generalists and not singly purposed species. The environmental swings are not gradually across the spectrum, but drastically, from one disparate environment to another. There is a reason why the opossum has expanded across the US and it’s not because it is an expert at anything (except as the double-toothed master of my nightmares). I can’t applaud this mechanism enough. By forcing players to respond to several environmental requirements altered by significant environmental changes and events (beyond simply climate swings), Darwin’s Choice is able to simulate the complexity of evolution within a fun package.

All in all, if you enjoy the evolution theme or felt that other endeavors were not necessarily focused enough, Darwin’s Choice should be on your back list. The mechanisms are fresh, it looks great on the table, the artwork (which we aren’t supposed to discuss in prototypes…) is fantastic, and it is a ton of fun. Far from pasted on, this game respects the complexity of the theme it has adopted and integrated. If I was to place it in a battle of wits against similar games, I would put my money on Darwin’s Choice.