We review Darkest Night Second Edition from Victory Point Games. This new edition of the cooperative game Darkest Night is a deluxe upgrade over the previous edition and includes piles of expansions and other gameplay. 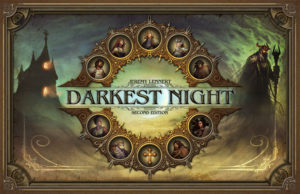 “Here. Review this,” said Tony as he tossed a game into the trunk of my Mazda 3.

“What is it?” I asked, realizing that my car was noticeably closer to the ground.

“It’s Darkest Night by Victory Point Games. It’s the second edition of the game, combining the first edition and all of its expansions into one giant box.”

I had always wanted to play Darkest Night and looked forward to cracking it open.

“I am on it!” I proclaimed as I jumped into my car and sped off into the sunset, noticing a significant dip in my car’s fuel efficiency….

Darkest Night is a cooperative fantasy experience for one to four players. Games last between two to three hours. The objective of the game is to defeat the Necromancer who has destroyed your unnamed kingdom.

Each round of the game consists of the four heroes taking their turns in an order determined by the group, followed by the board controlled Necromancer’s turn.  Note that the game was designed to utilize four heroes regardless of player count.

Each of the four heroes can do the following on their turn:

After the four heroes have had their turn, the Necromancer does the following:

This cycle repeats until you lose. There are rumors that victory can be achieved by either getting three relics to the monastery or by killing the Necromancer while holding a holy relic. Until I witness one of those events, I will continue to play until I lose.

Darkest Night is a difficult game, so if you are looking for an easy win you will need to look elsewhere. Why is it so difficult?

Let’s start with a game board that consists of seven spaces of which only one, the Monastery, is safe for your characters. The other six spaces are playgrounds for the Necromancer. These spaces will fill up with blights as the game progresses, similar to the disease cubes in Pandemic. If a blight is placed in a space that already has four blights, it goes to the Monastery instead. If you place a fourth blight on the Monastery, then the last light is snuffed out and evil wins. Easy, you say. Just run around and eliminate the blights…

There are three different types of blights:

You see, your characters have two stats: grace (essentially hit points) and secrecy. Grace is simple. If you are forced to lose grace for any reason and you have none, you die. There is no player elimination. If you die, you grab one of the 25 remaining characters and rejoin the slaughter… errr, fun.

It’s secrecy that makes this game fun and challenging because of its interactions with the Necromancer. He is on the board and actively pursuing your heroes, unlike that lazy Sauron whose efforts to find his enemies consist of using his mountaintop doorbell cam. Although event cards or failed quests may place a blight, the Necromancer will place one every turn. On top of that, he will pursue heroes that are not maintaining a low profile. When the die is rolled for the Necromancer’s move, if it rolls lower than a hero’s current secrecy, he will move toward that hero; otherwise the board determines where he will go. If he is in your space at the start of your turn, he fights you. That is bad!

So keep your secrecy high and he will never find you? Great, except when you fight a blight, are carrying a relic, or even fail some events, you will lose secrecy. There are ways to regain secrecy, such as hiding, moving, or spending your turn in the Monastery. Trying to strike a balance of when to fight and when to hide is one of the high points of this game’s design. You feel like overmatched guerilla fighters just trying to survive and, with a lot of luck, ultimately defeat the Necromancer.

I also LOVED the roster of 29 heroes, each with a particular set of (13) skills. What amazed me the most was how differently each hero played. Some heroes are good at sneaking around the board. Some are good at support. It goes without saying that some specialize in fighting. Building your unique team of four heroes and figuring out how they will work well together is entertaining.

The most impressive characteristic of this game is its replay value. There are SO many different decks included in this game: Events (bad), Artifacts, Maps, Quests, Mysteries and Darkness. Darkness is the epitome of overproduction replay value even though it is the smallest deck at 44 cards. This deck grants powers to the Necromancer as the game progresses; however, you will only reveal, at most, two of these in a game!

I may sound like I am gushing over this game, but I want to temper my enthusiasm presented above.

These negatives did impact my enjoyment of the game. When I researched this game, it looked like a game I would LOVE. After playing it several times, I “only” like it. Although I do not mind losing games, I want to feel like I had a chance. In two of my play throughs I knew there was no coming back due to the board state and how the blights had stacked up.

One final note: there are three pages of variants in the back of the book to make the game easier or, unbelievably, harder. There is also a variant for a player to control the Necromancer.

I would not recommend Darkest Night to gamers who dislike cooperative games, games in which luck is significant, or who prefer their games to be on the easier side. If you are one of those games, you will not enjoy Darkest Night!

Hits:
• The secrecy mechanic is great
• The content and replay value included is off the charts.
• The heroes all play differently and break out from the usual fantasy tropes.
• The game, while fiddly (see below), is not complicated to teach or learn.

Misses:
• The game is very difficult and luck dependent.
• Game length can be an issue, especially at higher player counts.
• Can be quite fiddly with all that needs to be placed and tracked.