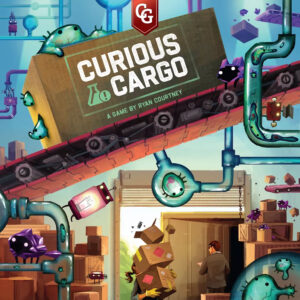 So why was I compelled to pick up Curious Cargo? For starters, most of my gaming in 2020 has been online or two-player games with my wife. Her gaming style is largely non-confrontational (although she’ll jump in and play the occasional wargame) and she’s recently taken to jigsaw puzzles. Curious Cargo takes the tile-laying and pipe connections of Courtney’s first game and removes the economic aspects while cutting the playtime down considerably and limiting the player count to just two.

Curious Cargo plays out in two phases: construction and trucking, each using allotted action points. When constructing, both players get three APs that they can use to draw tiles out of a bag or place the tiles on their player board. Machines need to be connected to the right and left sides of the board to ship and receive cargo using those pipes. The colors of pipes must match up to create a continuous network.

In the trucking phase, the actions revolve around the use of shipping cards. The cards have two uses: discarding them for new tiles or playing them to add a truck. Trucks can be added to either players’ factory. When they arrive, they push other trucks toward the other player until they cross over onto their player board, where they fully pull into the factory. If a truck ever stops at a spot where the pipes connect from a machine to the edge of the board, whether when they first are played or arrive from the opponent, goods can be either shipped or received. These cards can be acquired by discarding two tiles instead of playing a card.

Through tile placement, loading trucks, and moving up the turn order track, players can receive tokens that can be used in their respective phases. A construction token may be played during the phase to give two extra action points to a player. A trucking token may be discarded to draw a card, and then receive additional two action points for shipping. Splitter tiles are also available, which create a four-way intersection of a color of pipes. Use of those require spending a construction token and is the only way to get to the highest point on the turn order track. The tokens may be exchanged to get the ones that best fit your needs.

This repeats until one of the many game-end triggers happens. If the bag of tiles or the deck of cards is depleted, the game will end, along with a player shipping 9 goods in the basic game (12 in the advanced game). If any of those three ways trigger the end, scoring happens, which is based on the number of goods shipped, number of goods received, and points possible if a player creates at least seven connections from machines. If a player is ever awarded a star, which is given by creating ten connections or receiving four of a single type of good, the player with the most stars is the winner independent of score. But there’s one final catch: whether a winner is determined by points or stars, a player must have shipped two of all goods to even be in contention for victory.

Curious Cargo is a game that rewards experience. In your first game, things don’t feel very easy, and even with experience, it’s not as easy as a tile-laying game like Patchwork or Blokus. Many times, you have difficulties gathering and placing tiles as you look for the perfect fit. You begin a game with three cards, but you will spend those on tiles and trucks, leaving you obligated to spend tiles to draw new cards. When in those situations, you spend an entire construction phase drawing three tiles, only to discard 66% of them when the trucking phase rolls around. Those turns can be frustrating but necessary to help you out in the future.

Designer notes in the rules say “consider building the shape needed through stacking instead of waiting to draw the perfect tile,” and Courtney is spot on. Curious Cargo emphasizes that aspect of building compared to other tile-laying games. Each player is provided five scaffolding tiles, which allows them to stack tiles in a manner where one overhangs and the single-square scaffolding slides beneath to make it a level, legal move. If one doesn’t optimize their use of them, they may feel like the game comes down to a lot of luck of the draw.

I implied that my wife enjoys multiplayer solitaire games. On the surface, this appears to be one of those. The rules encourage playing the construction phase simultaneously, so for the majority of the game, you won’t be paying attention to what tiles they are placing. But there comes a point when you begin watching which color goods are being loaded from your opponent’s factory, even to the point where you may want to add a truck from your hand to their side of the board if their connections can load a good that you can use.

Curious Cargo is one of those games that facilitate eureka moments. One play of a truck card can fully load that truck, which gets you a bonus (like a new tile or a construction token). That can jump-start your next construction phase to where you can create one or two new connections. That can move you up on the first player track and give you bonuses like a new card, which can in turn repeat the process. It’s like you’ve built an engine, but used a lot of brainpower to pull it off instead of an income phase that we’ve come to expect from in modern games.

One of the big things that bloomed from multiple plays is the various strategies one can pursue. The most obvious route to score, particularly in early plays, is the shipping of goods. It’s the most straight forward and required due to the need to ship two of each color to be eligible for victory. But receiving cargo is a quicker, while a more difficult path for points. Much of it involves timing the arrival of trucks, eyeballing what goods the opposition is producing, and a little bit of card play of your own if you have a truck that can load many of their goods that you can in turn score. It provides me with a similar feeling of scratching each others’ backs as I enjoy in tableau builder Isle of Trains.

Even if your opponent scores big points from their shipments, if you receive four of one color (and ship off the necessary goods to be eligible to win) you bypass points altogether and score stars. It seems like a difficult path, but I have seen it done. I’ve not seen a player reach the star on the turn order track, but we’ve barely scratched the surface when it comes to using the splitter tiles.

The game would be solid with a single factory and the rules provided, but instead Capstone provides buyers with six different factory layouts that can be used to provide different experiences. There is also an advanced game that introduces purple crystals as a third good that players can ship/receive. But with all these components (even in a compact box size) the game can hog quite a bit of table space. The two factory boards must be directly in line with each other. There are also two additional player boards that are filled with components. And it benefits the players if all the trucks are sorted so that they may test how they might impact the factories.

Curious Cargo does a ton of things right. It puts a meaty game in a small package, with a condensed set of rules. Those rules facilitate many strategies, while also rewarding on-the-fly decisions. It has variability without any need for an expansion. Will some be turned off by the puzzly nature that results in a decent amount of brain burn? Sure, but not every game is a hit for everyone. By my estimation, Curious Cargo is one of the best games of 2020 and finds an easy place in my collection.

Misses:
• Can be too thinky for some
• Some turns can feel dull as you prep for the future
• Can be a table hog compared to the box size