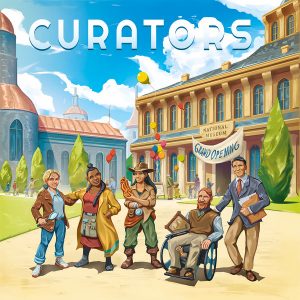 City building games have a pretty solid footing in the board game world. From origins with real estate games, the theme has morphed over time and blossomed other concepts of location building and management. One of these nascent ideas is the creation of a museum as a game. From titles such as Thebes and the more recent “Museum” board game, the idea of players being able to curate a collection of art is prime fodder.

Worldshapers, a new publisher out of Sweden, is bringing their own take on museum building to market with Curators, a game about building a museum and building the collection it houses. Players should expect to expand their small museum, acquire artifacts, and fulfill goals for museum floor plans. It handles 1-4 players and clocks in at a tidy 45 minutes, but a bit longer with 4 players.

The explanation of the potential victory points in the game can tell a lot about a game. When all turns are over, players will receive points for the following:

The layout of the game also borrows mechanically from Patchwork. A spiral path of wing tiles is laid out for the rooms that players can add to their museums. Starting at a corner section of their player board, new tiles can be added to expand to hold more artifacts. The player boards are also used as the back offices of a player’s museum, holding money and artifacts.

The real puzzle that Curators brings is in its action selection mechanism. Each player has a collection of 5 double-sided tokens which represent the different actions of employees. To take an action, a player simply flips the token to its reverse side. However, the reverse of the token is a different employee. This means that taking an action with a token will eliminate the possibility of taking that same action a second time in a row. However, this also opens up another action option. Players can flip two of the same employee tokens over to perform an augmented action. Strategizing to maximize these actions is at the heart of the game.

The different action tokens are as follows:

Another bump in the road for curators (the players) is the option of fulfilling contracts. These are separate cards that show a particular room layout. If a player has completed that layout by having rooms occupied with artifacts, they can earn additional points at game end. This presents a variety of game strategies for each player as they balance haphazard room building with carefully planning each wing’s placement.

Once players have run out of wings to place from the spiral track, the game ends. All that’s left is the counting of points.

Ok, right off the bat, players who liked Patchwork but wanted a little bit more economics in their quilt-making will gravitate to this. It has an action and money economy that drives decisions in a very meaningful way. Players will constantly be mindful of what contracts they have and what tiles (including the valuable single room tiles) opponents might be going for.

The other audience who might take a good look here are those looking for lighter, shorter games that still have some meat on the bone. Curators can take up some table space, but the box is small for the comparative size and scale of the game. It definitely ends with the same feeling that players would have after playing a medium Euro game.

The one thing that Curators could have done better is the complexity and variety of player options. Many times it feels like an overly conservative conversion of two resource systems (tiles and artifacts) into points for contracts or completed wings. It’s engaging, but the gameplay always feels like it’s on the cusp of something more.

Patchwork fanatic? Uwe Rosenberg or action selection aficionado? Take a look at Curators. It meets a puzzle solver’s requirements and feeds an economic gamer’s need for crunch. The combination works seamlessly and results in a surprisingly hefty game in a small box. Even with the feeling of needing slightly more depth and variety of player options, Curators still has the right formula for a heavy filler or family perennial favorite.

Curators is launching on Kickstarter in April. If you’d like to be notified of the launch, you can sign up on the campaign page here.