A few years ago, White Wizard Games rocketed onto the scene with their highly sought after deck builder Star Realms. This scifi themed card game put a new twist on the deck building genre by having players not seek after victory points, but ways to attack their fellow players.

At Gen Con 2015, Tasty Minstrel Games released Cthulhu Realms. Based on the game play of Star Realms, Cthulhu Realms takes us from the SciFi into a Lovcraftian world where players must defend their sanity. White Wizard Games has since taken this great card game and brought it to the digital world. Today we are going to be taking a look at the iOS version of Cthulhu Realms and see how well the game translates onto our iPads and iPhones.

The goal in Cthulhu Realms is to reduce your opponent’s sanity to zero. Each player starts with an identical deck of attack cards and conjuring power (money) cards. During the game, players will be using their conjuring power to purchase cards from a central row. These cards will be added to a players deck that will not only give them more powerful cards to use, many of them will also interact with other cards played during the game. It’s these combos that will allow a player to eventually reduce their opponent’s sanity to zero.

If you’ve played Star Realms (you can read our review here), the game play is pretty familiar. Cthulhu Realms kicks things up a notch by only having three different colors of cards (if you don’t count the starter cards) and more interaction between color sets.

White Wizard Games did a great job with the Star Realms app, so it’s no surprise that Cthulhu Realms has a similar amount of polish.

The main interface is laid out in a logical way. The center of the play area houses the cards available for purchase. Your opponent will be at the top of the screen, with any locations they have in play to the left.

At the bottom of the screen is your play area. Your hand is on the left, and a simple tap (or tap and hold) will zoom into a card to see its effects. When you a play a card, the app automatically calculates how much sanity and power it gives you. It also calculates any bonuses you get for playing appropriate matching colors. When a card has an optional power you can activate, the card’s border will glow. If too many cards are played, an arrow will appear to let the player page through the card.

Similarly, when you are ready to purchase, any cards you can afford to buy will have their borders glow. Buy a card is as easy as dragging them to your trash, or clicking on it and tapping the Acquire button.

Overall, the interface works smoothly and we had minimal issues. I’ve tried the game on both the iPad and iPhone and, while I prefer playing on the bigger device, the smaller iPhone screen worked quite well.

I was a fan of the Star Realms app, so I had high hopes for Cthulhu Realms. Fortunately, White Wizard Games was able to expertly deliver a great gaming experience on the digital platform.

Following their previous trend, if you buy Cthulhu Realms on any device, you will unlock it for every platform it’s offered on (iOS, Android, Steam). The app is free to download and allows you to play the tutorial, VS the Easy AI, and the first campaign. A $5 purchase will unlock the game on all devices, give you access to online play, and the rest of the AI play. My hat goes off to White Wizard Games for truly setting the bar of how a free-to-play app should be done. Other game developers take note.

If you are mainly a solo player, there are a few different ways you can play vs the AI. The tutorial will get you up to speed quickly on the finer points of the game and how to play. Although I feel like the tutorial could explain the interface a tad better. When choosing a card to discard, I had no idea you could press and hold to zoom in. I was tapping with no luck.

When playing v.s. the AI, you can choose to play against either an easy or hard AI. Easy mode should be fine for new players looking to get their feet wet. But veteran *Realms players will want to quickly move on to the hard AI, which can offer a decent challenge.

The campaign mode actually tries to throw a bit of a story in at the players, and alters play v.s. the AI with changes to the rules. I enjoyed the easy campaign mode, but the hard one, especially the second campaign, is offering me a real challenge. The AI is given quite the helping hand and has been particularly punishing that has me questioning how balanced it is.

If you want to hop online, I’m happy to say that online play is very smooth. You can play either asynchronous or in realtime. Asynchronous gives players 48 hours to take their turns, while real-time has a nice timer that keep the game moving. You have 30 seconds to take your turn with an additional 3 seconds of each move you make. Plus, half your time is saved for future turns. In practice, I found this mode to work very well.

White Wizards Games has passed on using Game Center for their own interface. If you want to play against a friend, you have to type in their name to start a game. It works fine, but it would be nice to have some kind of friend list so I don’t have to constantly remember everyone’s user id. The other annoying thing about challenge mode is that it doesn’t record your win-losses. Only games against random opponents do. I’m not really sure as to the reasoning behind this, but as the record doesn’t really factor into anything, it’s not the end of the world.

I am a big fan of Cthulhu Realms and have been looking forward to the release of this app for a while. While I did enjoy Star Realms, I much prefer Cthulhu Realms. Even if you are a die-hard Star Realms Fan, since the app is free to play, there is not much risk in downloading it and checking it out.

If you are looking for an excellently designed deck builder, then Cthulhu Realms should be on your radar. White Wizard Games should be commended for their excellent free-to-play model and designer Darwin Kastle did a great job with the game play. I’ve already played more games of Cthulhu Realms then I can count and I’m sure this one will have a permanent home on my iDevices.

If you’d like to download up a copy of Cthulhu Realms, the app is Free to download, with a $5 in app purchase unlocking all game modes.

Final Score: 4.5 Stars – An excellent translation of a fun deck building game to the digital realm.

Misses:
• No friends list
• Challenge matches don’t save in your W/L record 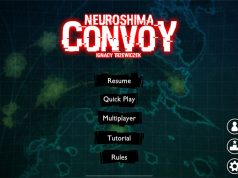