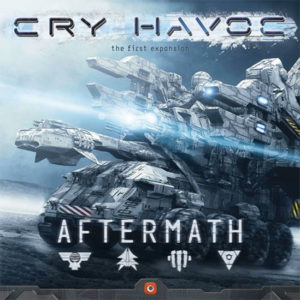 I remember Cry Havoc being one of the hot games releasing at Gencon 2016. This asymmetric, area control game did not disappoint me or many others. Unfortunately, my Cry Havoc stayed on my shelf through most of 2017 because of new games releasing and any game, even the great ones, can get lost in this gaming renaissance we’re currently in. It was not until Essen 2017 that Portal Games released Cry Havoc: Aftermath, the first expansion.

Let’s take a look at what Aftermath adds to the base game and if it’s worth adding to your gaming collection.

The Aftermath expansion increases options for each warring faction. You don’t have to use all the new additions, but a few will include new setup and/or play rules.

Each faction gains new skill cards (default and non-default) and new structures giving more options beyond the base game. Plus there are new terrain tactics cards to be shuffled in with the base game decks. No big base rules changes with these additions.

The base game rule changes do come with the following Aftermath additions:

I think most gamers would agree that you want an expansion to add variety to the game and ideally become an essential piece for future game play. Cry Havoc: Aftermath fits the bill for both. It also doesn’t add new complexity where you feel like you’re learning a new game. Aftermath’s addition makes Cry Havoc simply better and gives you a reason to bring this one back to the table.

Some of the additions to the terrain tactic cards might not seem like a big deal but overall this gives all players more variety. I think what most players will feel has the biggest impact is the additions to faction skill cards and structures. These will likely affect player’s strategy by giving new options that the base game lacked. I love asymmetrical games and these additions will make me want to try out each faction by mixing up the old and new skills and structures and see which I can have success with.

In my opinion, the best part of this expansion is the new leader boards. Each board is two-sided featuring a different leader with a different ability on each side. Now, you chose a side and stick with that one for the game. But each leader has an ability that you don’t need to spend skill or tactic cards to use. The leaders and their free abilities add to the variety and replay and, again, I want to try them all out.

Another slick addition is the universal structures. These are open to all players but its first come first served in that each structure comes with a token that you place on the game board. The placement will need to be strategic because if your opponents gain control of that region, they gain control of the structure and can use it. Not all factions will benefit from these but it gives players more options to build beyond the faction structures.

Probably the only significant change to the base game is the welcomed increased game length (now up to 5 rounds). This seems to give all players a nice balance by delivering an equal duration for all. In addition fixed 5 rounds, the new scoring cards give all players another chance to add to their potential VPs. Both additions should help players looking to play catch-up or extra time for those looking to secure their win.

The only thing that I found frustrating is that there are still no rules for playing the Trogs unless you’re at the 4 player count. I had this issue with Cry Havoc when it first game out and again, being that I want to try each faction, I was not able to unless playing with 4 players. Now, Aftermath bolsters the Trog skills, structures, and even adds a leader as the other factions but you can still only play them at the 4 player count. I still want Trog play rules for 2-3 player count.

I think one way to rate the success of an expansion is if you’d never play the base game without it again. For any fan of Cry Havoc, I think that would be the case for Aftermath. The additional cards for tactics are nice, but the new faction skills, structures, and especially leaders are what will win over most players. I do like the universal structures, but some factions will benefit more than others. The increased game length and scoring cards in Cry Havoc: Aftermath also adds some new balance that was lacking from the base game.

I’m still not thrilled that there are no new rules to play Trogs at 2-3 player counts, but all the additions outweigh this negative. I guess I just need to find 3 other players to play with…oh, well.

If you are a fan of Cry Havoc then you’ll want/need to pick up Cry Havoc: Aftermath.

Misses:
• Still no rules for playing Trogs with fewer than 4