We review the new trail based, roll and move game Cross Hares: Testing Ground. While this board game has some great artwork and a fresh theme, it's ultimately held by back its incredibly dated game mechanics. 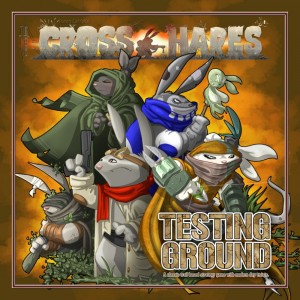 How would you define old school board gaming. When you think back on it, what games dominated your gaming table growing up? For me, I began with the usual games like Mousetrap, Monopoly and Chutes and Ladders. Eventually, I moved on to more “exciting” games like Hero Quest, Battle Masters and Torpedo Run!

Today we are going to look at Cross Hares: Testing Ground. Published by 1A Games, Cross Hares was both designed and illustrated by Jesse Labbé. Billing itself as a “classic trail based strategy game with a modern day twist”, Labbé seeks to bring the games of our past into the future. Did he succeed? Let’s find out!

In Cross Hares, each player takes on the role of a powerful rabbit who is trying to make its way down the path and defeat the factory at the end. Each rabbit has a unique ability and can also gain items and powers during the game.

Each turn, you roll a movement die to advance your character towards the factory. As you land on different squares, you will be drawing cards that will either hinder or help your progress. After some fighting, advancing, retreating and adventuring, the first player to defeat the factory at the end of the path wins.

This is the second title published by 1A Games (the first being Tide of Iron), and so far I’ve been impressed with their quality. Overall they did a really good job in putting together this game. From the custom dice to the nice miniatures to the large game board, everything in the box helps a gamer to feel like they’re getting their money’s worth.

Where Cross Hares really shines is with the artwork. Designer/illustrator Jesse Labbé is a really talented artist and I thoroughly enjoyed the artwork during the game. Cross Hares even comes with an illustrated novel to give you some back story on the Cross Hares universe. High marks for 1A Games for putting this one together.

If you’ve ever played a board game in your life, then you should have no trouble jumping into Cross Hares. The rules are fairly straight forward and the rulebook even opens with some quick start rules to allow you to jump right in.

Each player beings by choosing a rabbit and a starting location, then the first player takes their turn. On your turn, you roll the movement die and move that many squares (unless you roll the research symbol). Whichever square your rabbit token lands on will produce a variety of effects. These range from drawing a Stronghold (good) or Testing Ground (bad) card, gaining a specialty or item token, activating the event card or even nothing.

After you are finished moving, the next player takes their turn. Turns continue in this manner until someone reaches the factory space at the end of the path. In the basic game, the player just needs to defeat it. In the advanced game, there is a chart you roll against to determine what happens.

If you are thinking based on the how to play explanation that Cross Hares: Testing Ground might not be the game for you, I’m guessing you are probably not alone. I also don’t think it’s too much of a reach to say it’s not going to be the right game for a lot of gamers, myself included. Which is sad, because I really wanted to like Cross Hares.

I loved the artwork, I thought the theme was really clever, and the components are really top notch. However, the game play constantly left me wanting more. I get what the designer was trying to do when he made this game. He wanted a throwback to those games we played growing up. But I think he ended up being a little too close to them. There is a reason we don’t still play Fireball Island or Life (at least at our age). It’s because we’ve come along and built a better mousetrap (pun intended).

Roll and Move is probably one of my least favorite game mechanics. I think this is because it can take the strategy element from a game and completely toss it out of the window. The mechanic can work in certain games where it makes sense. Formule Dé comes to mind. But that’s only because where you land in Formula Dé isn’t critical. It is in Cross Hares; where you land is basically your whole turn. Do I want my entire turn to be left up to a 1 in 6 chance? For me, that’s not fun.

I had one game where I landed on an empty square 5 turns in a row. That’s not very exciting. Other times I would land on a testing ground square that would send me back 6 spaces based on a card I drew. Now I’m fine with some luck in my games, but luck is a huge part of Cross Hares; so much that it over powers the game.

Now, I think I’d be fine with a throwback game that is this luck heavy if it was quick game. But Cross Hares takes at least 45-60 minutes, even with 2 players. That’s really just too long for what it is. I think 25-30 minutes, tops, could have worked.

Now I don’t want you to think there is nothing good about Cross Hares. I like the variable player powers, I also like that the game has a bit of hand management. The Stronghold Cards you draw played at the optimal times can really help.

There can also be a healthy dose player interaction in the game. If you like screwing with your fellow players, Cross Hares has a good amount of “Take That”. From battling each other when you land on the same space, to certain characters that can drop traps, there are a variety of ways for you to mess with your fellow players, which goes a long way to making the game more exciting. It’s just too bad that Cross Hares briefly flashes these bits of a fun game in between the long periods of “pick up a die, roll it, repeat”.

Finally, I should talk about the rule book. I ended up liking and hating it all at the same time. I enjoyed that it was setup to allow you to start playing right away. I also liked that the designer gave it a humorous tone, which I felt fit with the game. But on the other hand, it wasn’t laid out the best. More than once I had a hard time finding a rule. I couldn’t find the hand limit rule anywhere, but I knew there was one because an item increases it. I ended up having to jump online to find that out. Then, one of the characters had a power that let it ignore military encounters. I wasn’t even sure what that meant. Is that just cards? Fighting with other players? Nowhere in the rule book did it explicitly say what a military encounter is.

I can see Cross Hares: Testing Ground being a really polarizing game. I think some people will enjoy it, but I also think a lot of people will hate it. I do get that the designer wanted to make a throwback game, but I guess I have to question is if we need one. It’s like when you re-watch a cartoon you loved growing up, only to realize how bad it was (*cough* Dungeons and Dragons Cartoon). I think nostalgia may warp our relocation of how good things from our past actually were.

At the end of the day, I think that Cross Hares: Testing Ground ended up succeeding in what it was trying to do. Create a trail based game that reminds you of some of the games you played growing up. But I think the experience could be been replicated without being such a slave to the old mechanics that have long since been improved upon. For the same reason we are not still playing VHS tapes, we’ve found a better way to do something.

I’m sure there are people that will enjoy Cross Hares: Testing Ground. If you are harking back to some of the games of your childhood that are no longer around, it might be fun for a throwback night. Could it be a good family game? The rules are certainly easy enough, but the theme and heavy dose of “take that”, might not be the best for a group of children. So where does that leave Cross Hares? I think it will fall into a very small niche of gamers looking for something very specific. For the rest of us, you’ll probably want to leave the past where it is.

If you’d like to try it out yourself, you can pick up a copy for about $40

Hits:
• Great Artwork
• Unique and interesting theme
• Will appeal to fans of “take that” games