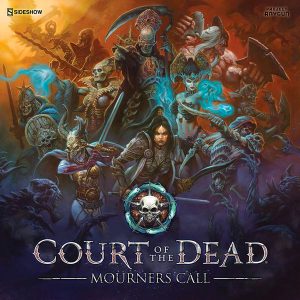 Some readers can skip this introduction entirely. The next game to weigh on the scales of Anubis is Court of the Dead with arguably the strangest theme this reviewer has ever come across. For those who are already familiar, skip to the Final Thoughts. (Insert Vincent Price voice-over) For the uninitiated who dare to plumb the depths of the ghastly, underworldly theme, read on.

Here’s the concept: Heaven and Hell are in a war that has raged since the beginning of time. And, since Heaven and Hell no longer represent good and evil, the war is nothing more than an ongoing battle for supremacy while consuming Etherea, energy provided by mortal souls. To gain this resource, these forces rely on Death himself (a big Charon-esque figure) to harvest souls.

So, Death, having tired of this arrangement, decides to take action by creating Mourners, servants who marshall souls. As it happens, these Mourners have begun to separate into three different factions: Bone, Flesh, and Spirit. Each of these factions operates with different priorities. This is where the players come in.

As Death struggles to overthrow the rule of Heaven and Hell and take supremacy for him/her/itself, the players operate as Mourners in a semi-competitive manner to elude Heaven and Hell and gain power from the various locations in the Underworld. The Mourner who gains the most Faction Points and also points for their Ulterior motive will win… and…. rule with Death? Never mind that it’s a bit unclear, just think area majority control with some faction abilities. As for player count, it’s best with 3 or 4 given the minimum 90 minute play time.

The main board features several locations to control along with faction symbols for each location alignment. There are also two tracks on the edges of the board and also separate tracks to keep an eye on how much faction control each player has.

The first semi-competitive “Celestial Suspicion” track is a gauge of whether Heaven/Hell has knowledge of the rebellion that Death is planning. If Suspicion goes up, players will need to pay more and more Etherea (game currency) to the celestials. The other track is called the “Dreadsgrip Meter”. This is explained as a measure of the “destructive nature within every mourner”. If this goes too high, it means fewer mourner figures can be present at any one location (otherwise they fight/argue). This is the other aspect of the game that makes it semi-competitive.

Players also have a player board and will be seeking to gain mourner cards that represent the figures they have out on the board. Each card illustrates the various abilities of the figure and could change some rules or grant a bonus for a given phase of play. During setup, players will also gain an ulterior motive card which represents a secret objective worth points at the end of the game.

The overall game structure is one of indefinite game rounds with each divided into 8 phases. Every player participates in each phase at the same time. Those phases work as follows:

The game ends when the last of the supply of “Unity Tokens” (point tokens) is collected. That round serves as the last round.

As a reviewer, one of the most important things is to understand the game completely. Having read the rules a couple of times, the mechanisms are very easy to understand but what was still missing was the theme. After reading the graphic novel—really a collection of short scenes how some Mourners came to being—the game’s mechanism and the intent made more sense, however, appreciation for the theme took a dramatic turn.

Rarely will a reviewer complain about a game’s theme, but here it is due. Others may see the story inherent in the theme as some epic struggle against the ignorant powers that be. In reality, having seen the source material, nothing is further from the truth. The short stories in the graphic novel merely serve as a vehicle for the absolutely amazing and wonderful art, but offer no real substance for the (intended) mighty struggle in the game. As such, Court of the Dead is a game woefully devoid of meaning and motivation. In some ways, that’s worse than a pasted on theme.

But, that aside, does the game deliver in mechanisms? It certainly has a lot of them, and besides the Dreadsgrip meter, all are straight textbook implementations. There is really nothing of strong interest in any of the actions and phases, and any player who has played Blood Rage will be groaning that they’re not playing that title.

But, as for how the mechanisms work well together? Well, that’s a mixed bag. The random generation of Etherea becomes irrelevant with the “I split, you choose” laid on top of it. The Wallows cards are a bit random. Players might like to adapt to those goals they’re given but realize their Ulterior motive and faction goals give bigger points. The other struggle is meeting the Celestial Suspicion track goal, which is only beneficial to the richest players. In addition, the Dreadsgrip meter penalties can sometimes be ignored. Finally, the differences in the faction/mourner abilities can be really unbalanced at times and there isn’t much any one player can do to stop another.

And, finally, the locations on the board which should provide some intrigue for the control aspect of the game are largely resource/faction influence mining locations. Besides controlling them for victory’s sake, there doesn’t feel like there’s much challenge between players with them.

So, is there fun? There is some in the calculating way to deploy figures each round and which cards to draft. Players can plan and execute a strategy to gain resources and delicately force other players to spend more to defend their own plans. But on the whole, the interaction is very passive, even for area majority games which this reviewer is a big fan of. And, in addition to all of the above, the game is clearly meant for 3-4 players, not two.

Overall, Court of the Dead: Mourners Call has plenty of unforced errors that make for an uninspiring whole. It doesn’t make any mistakes so large that it should be relegated to the bottom shelf of gaming, but it’s not digging deep enough into the theme to find the real game. This feels very much like a game made for an IP, not a game designed with mechanisms as the central draw. Players who like the Court of the Dead theme will be satiated. Gamers looking for the next Blood Rage will be disappointed.

Final Score: 2.5 stars – A beautifully executed theme can’t save the desperate mechanisms from hanging limp on the gallows.