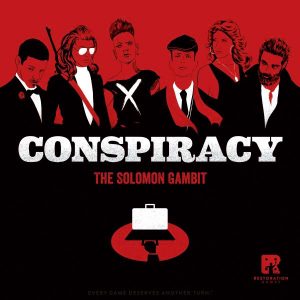 Two of the most subjective aspects of board game reviewing are components and the illustrative art that goes along with them. In addition to this, game publishers will usually push designers to minimize the number of components needed in a game for efficiency and lower costs to bring a game to market. However, there is a counter perception by some consumers that more components and more quality in the presentation is a grander experience. Armchair game historians should take a browse-stroll through some older games on BoardGameGeek to see how this has changed over time.

One of the games from the early days of modern hobby board gaming (when components were few) has been taken up by Restoration Games, and this quandary of simplicity vs perceived value will immediately come up. Conspiracy: The Solomon Gambit (Conspiracy, 1973 originally) is their latest revisit of a classic game with additional rules to help the potential playtime issues. It’s a game of spies, money, and intrigue across Europe in a race to deliver the goods. Sounds cool.

The game structure is very simple. Various spy tokens are placed on a board showing a map of Europe. At the beginning of the game, players receive money tokens and a payoff board hidden by a screen. Spaces on the payoff board list spy code names and placing money tokens on a space means the player has paid that spy the allocated amount of money. Players will take actions to move spies on the board in order to move a briefcase token back to their headquarters. However, they can only make a move if no one else challenges.

And there’s the catch. If a player challenges a move, the dueling players enter a kind of pseudo-auction. Each may announce an amount of money less than or equal to the number of money tokens they have paid to the spy being moved. If the last player to announce an amount says an amount greater than or equal to the highest “bid” paid to a spy, then that player wins. If the challenger wins, the player moving the spy loses the action. If the acting player wins, the challenger must forfeit their next turn and instead make a payoff.

The other actions a player can take on their turn are to payoff a spy by adding coins to the spy’s space behind their screen or “Burn” a spy by removing the targeted spy’s token from the board. This last action is handled just like a challenge, but if the targeted spy gets burnt, they are removed from the board and any payoffs made to that spy stay on players’ boards, effectively neutralizing that money.

Oh, one other thing. Players only have 30 money tokens for the whole game. They never gain any more.

Restoration Games revision for this publication have additional rules for making payoffs to “Dr. Solomon”. If the game could potentially end in a stalemate because no one player can get the briefcase moved, a die is rolled each round. If the die face comes up with the icon for Dr. Solomon, the player who has paid him the most is the winner.

As alluded to in the introduction, Conspiracy: The Solomon Gambit is a minimalist production. Gamers who prize elaborate game productions with lavish art and cardboard as far as the eye can see won’t be impressed. This is easily a game that could be made at home, and there are even pictures of versions made from LEGO bricks on BoardGameGeek. For those seeking out games with a deep stew of content to dig into with each game, take a pass here. Conspiracy is a one-trick pony.

That’s the main point to consider on this title. Gamers who like an interesting experience and favor the simplicity of a single mechanism’s conceits will gravitate towards this gem. It’s the type of game players keep because it does that thing and it does it well.

Does it have replay value? Yes, but not in a modern sense. It shows all it’s got in one game.

Is it engaging? Very much, but too many plays and only inner competitiveness keeps it so.

Can it be played at different player counts? Two is ok, 3 is great, 4 can get chaotic.

I guess the real crux of this review is that this is one of those games that really asks what the purchaser wants from their games. To say Conspiracy is a great game is only half the story. It’s great at one thing, which in other games might just be one mechanism of many. If that “one thing” is exactly what players at the table are looking for, Conspiracy delivers the goods, so to speak.

For gamers who love a delicious taste of intrigue and engagement from subtle deception, Conspiracy: The Solomon Gambit is a gem. It could leave the game shelf quickly if played too often, but with a more casual group and less frequent appearances on the table, it’s wonderfully tactical and subtle. In terms of the value per dollar, it really depends on the game experience players want, and for this reviewer’s money, Conspiracy: The Solomon Gambit is enough.

Final Score: 3.5 stars – A perennial gem of intrigue that shines as a gateway game or game for rivals needing to work out their differences.