Home Game Reviews Color It! Review
Review of: Color It

We review Color It, a roll and write board game published by HABA Games. In Color It, players are racing to be the first player color their whole sheet. 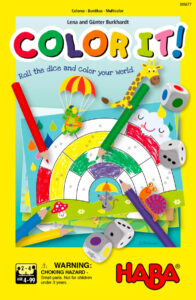 If you’re like me, you loved coloring as a kid. I distinctly remember this Super Mario Bros. coloring book I got one Christmas and the frustration I had when I didn’t have the right colors to make all the characters as I saw them in those Nintendo Power magazines. Even now as I have kids, I love coloring with them and just appreciate the time and creativity that it affords. I haven’t gone so far as to buy the adult coloring books just yet, but since I’m officially a stay-at-home dad now, maybe I should.

If you’ve got little ones or just love coloring yourself, then Color It! might be something you’re looking for. Color It! from HABA is a roll and color game for 2 to 4 players, ages 4 and up.

Color It! offers two ways to play the game depending on the ages of those playing, but they generally play the same. Players will choose from one of the four included coloring sheets, such as hot air balloons or flowers. On a turn, dice are rolled showing either a color or number. Players will fill in those numbered spaces with the chosen color. Color sheets have rules about color placement, such as adjacent spaces having dissimilar colors or certain rows being allowed to have only one color. If a player isn’t able to fill in a space, they just skip a turn and don’t fill anything in. The player who fills their sheet in first wins.

I thought that this would be a really neat game for my 6- and 7-year-olds to try out. They enjoy being creative, painting, and coloring in our playroom. For me, this seemed like a natural fit. However, after I presented them with this game, we had difficulties keeping engaged. I don’t think the reason for this aloofness has anything to do with the rules or really the game itself; it’s the offering of coloring in a structured manner that posed the most difficulties.

Aside from color-by-number activities that all of us are familiar with, most coloring is up to the child’s discretion. So for me, when a parameter was put in place that a color and number may not be in a consistent relationship such as found in the color-by-number activities, and the ability to creatively express oneself through coloring isn’t present, then something has to give.

In my case, my kids just weren’t interested in playing the game by the rules; they much preferred to color spaces in as they saw fit. And that was something I was not inclined to try and change. So I think this game would be better suited for kids who are a little past coloring as a flow of consciousness experience.

I think adults will get some enjoyment out of this game. I think it’s important to temper expectations because the thought might be to associate this with similar roll and write games and that doesn’t really fit here. There are no combos or strategies outside of luck of the dice. I might even be inclined to classify this as a game-related activity rather than a full-on game.

That’s not to say the experience is fruitless. In a lot of ways, it’s a nice change of pace from a competitive experience that you usually find in most games. It’s not a big-time commitment and at the end of the day, if you don’t win, it doesn’t really matter. But if you’re looking for a game that can integrate coloring and gives you a satisfying flip and write experience, I’d recommend Second Chance as an alternative.

I’ve tried to give Color It! some thought of who is going to be most interested in playing it. I think if you are an adult who enjoys roll and write games, you’ll find the lack of strategy and prominence of luck something to be avoided. I think if you know these two things are present and are okay with this being more of a casual, coloring experience that lacks competition, you’ll probably enjoy it more.

For kids, depending on their ages and inclination towards coloring, you might find them taking a liking to this different and spontaneous way of coloring something in. But if your kids still enjoy coloring in the random sort of way we all began our coloring journeys, then Color It! might be a struggle for them to be interested in coloring within the confines of rules.

Hits:
• Plenty of color sheets and colored pencils included
• Best enjoyed as a casual experience rather than a competitive game