We review Codenames: Disney, a new Disney themed version of Codenames, published by USAopoly. Codenames: Disney includes rules to play both the "family version" of the game, and also components to play codenames the traditional way. 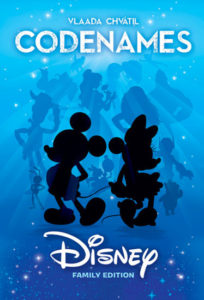 Since its release at Gen Con 2015, Codenames has been very popular tabletop game. Game designer Vlaada Chvátil, known more for his heavy games (Mage Knight, Dungeon Lords) surprised everyone with a fun and accessible party game that invokes memories of the old clue game Password.

As the years have gone by, Codenames has garnered yearly releases with Codenames: Pictures, Codenames: Duet, and now, Codenames: Disney. However this version of Codenames promises to be more than just a simple re-theme, as the box also dubs this one a “Family Edition”. Is this a game you can now play with your young ones? It’s time to find out.

If you have every played Codenames before, you can skip down to the next section as, for the most part, nothing has changed.

In the family edition of the game, the cards are laid out in a 4×4 grid. Players can choose if they want to use the pictures side or the text side. Teams are formed and one player from each team will be the clue giver. The clue masters look at the secret key card that shows which cards in their grid belong to their team.

On a team’s turn, their clue master can give them a 1 word clue, followed by a number. The clue can be anything except a word on the grid (if playing with the text side of the cards). The number that follows is how many cards the clue refers to.

The teammates then point to the card(s), one at a time that they think the clue master was referring to. If correct, they get to cover up that card with their color. If they accidentally chose an opponent’s card, their opponent gets to cover up their card. First team to cover all their cards wins. Note: There is no instant lose card in the family version of the rules.

Codenames has to be the easiest game in the world to re-theme. As the entire game is essentially random words on a grid, I’d think that very minimal play testing would be required. So if you are a veteran Codenames player, then everything is pretty much how you would expect.

However, one thing Codenames: Disney definitely got right was making it accessible enough for little kids. We were able to play with kids as young as six and, while he needed a little help as the clue master, he was able to make guesses just fine. It also helped that the grid was shrunk down from 25 cards to 16, and that the “Game over” card was removed. However there is also a stack of secret key cards included to play the “advanced version”, should you want to play with the traditional Codenames rules.

I also was thankful that the cards were dual sided, with pictures on one and text on the other. While I’ve seen more than my fair share of Disney and Pixar movies, there are still TONS of films I haven’t seen. I would probably be fairly lost on the text side when you got to names of characters from Moana or Frozen. At least on the picture side, I can make guesses based on what I’m seeing.

Publisher USAoploly also smartly included cards from the entire range of the Disney catalog. There are stills from the original cartoons such as Sleeping Beauty and stuff as recent as the latest Pixar movies. Fans of Disney will definitely appreciate the span of content here.

The down side of that is it can sometimes be quite difficult to link more than one card. This is especially true in the family version when you have even less cards to work with. Many times we’d just give a 1 number clue because there was no good way to link our cards.

I think Codenames: Disney is probably the best version of the game to get if you are hoping for a Codenames experience to play with your family. The Disney imagery will defiantly appeal to fans of their movies and the lighter ruleset makes the game more accessible.

However if you are looking for a new version to play with your gaming group, you might want to give Codenames: Disney a pass (outside of diehard Disney fans), you just aren’t going to see enough difference here to justify buying a new version.

Final Score: 3 Stars – It’s exactly what you would expect with a Disney re-theme of Codenames, however linking the cards together is more difficult than you might expect.

Hits:
• Great ruleset to play with younger kids
• Cards span the full range of Disney movies
• Dual sided cards with text on one side and pictures on the other

Misses:
• Can be difficult at times to link cards with a clue