We review ClipCut Parks, a roll and write style game published by Renegade Games Studios. In ClipCut Parks, players are racing to be the first to complete five park cards by cutting sheets and placing pieces on park cards. 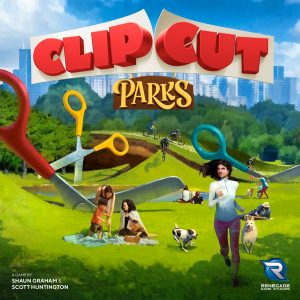 One of the nice things about a genre being popular is that we start to see designers taking it off in wild new directions. Even though roll and write games are quickly reaching a saturation point (if we have not already arrived there), I’m still getting surprised every now and that at what some designers cook up.

Today, we are going to look at ClipCut Parks, a new roll and cut game published by Renegade Games Studios. For 1-4 players, ClipCut Parks will have players racing to build five parks in their city.

As you might expect with games in this genre, learning ClipCut Parks is fairly easy. Each player gets five random park cards—with two of them face-up at the start—and a park sheet.

Each round, a player rolls the die that determines how long and how many cuts players need to make. There are a few rules for making cuts. For example, cuts must start at the edge of the park sheet, or from the end of a previous cut. And no combining cuts (so no making two length 3 cuts into one length 6 cut).

Once a piece falls off your sheet, it must be placed on one of your park cards. If a square has a color or icon, the paper placed on top must match (red to red, for example). Pieces can either be single squares or multiple as long as the placing restrictions are honored. If a player can’t immediately use a piece that is removed from their sheet, it is crumpled up and no longer able to be used.

Once a player finishes a card, it grants them a small bonus, either in cuts or flexibility in future placements. They then draw a new card to work on and play continues. The first player to finish all 5 cards, wins.

As I said in the intro, ClipCut Parks manages to take a genre with no shortage of options and give us something a little bit different. Is cutting paper with scissors a bit of a gimmick? For sure, but it also changes the mentality of the game somewhat. Cutting with scissors is a destructive move with no take-backs. With most roll and writes, you can always erase a mistake or change your mind. With ClipCut Parks, once you cut, that paper is cut and there is no going back.

This has the added effect of making the game a little more thinky than you’d expect. You need to plan your moves ahead. This is doubly so because if you cut off a piece of paper too early, it’s gone forever (unless you can actually use it). And losing paper sucks. Not only do you waste the chance to fill out a park space in this race, but you have lost all the actions it took you to make that cut. ClipCut Parks is all about action optimization and making your cuts as efficient as possible.

Despite ClipCut Parks requiring some forward-thinking and planning, it’s still a quick and casual game. Teaching the game should only take minutes, with explaining the cutting rules being the most complicated part. This one is fairly accessible to just about anyone that is old enough to not injure themselves with scissors.

The downside of ClipCut Parks is that its replay value is going to be fairly limited. Games from one to the next aren’t going to feel very different, which makes this one more of a “pull off the shelf every once in a while” game instead of a multiple times in a row game. This is feeling is increased by the fact that there is no player interaction in the game. Players will all do their own thing, with no way to affect their opponent’s actions.

While ClipCut Parks isn’t the best entry in the genre, it does forge off a new path with its unique cutting mechanic. For those curious, yes the theme is completely pasted on, but that’s to be expected with a roll and write game. One other thing to keep in mind is that ClipCut Parks comes with 100 sheets. That’s at least 25 games worth (if you play every game with four players), so I’m guessing that will be sufficient for most players. If you need more, Renegade sells them on their website for $5 for 2 pads. Unfortunately, there is no option to download and print off your own.

Final Score: 3 Stars – A game that does some new stuff, but lacks the variety to get it back to the table all that often.

Hits:
• A unique entry into the genre
• Rewards planning ahead
• Highly accessible

Misses:
• Games are going to feel the same from one to another
• No option to print off your own sheets 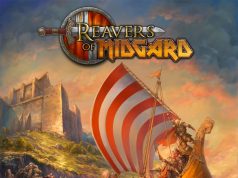