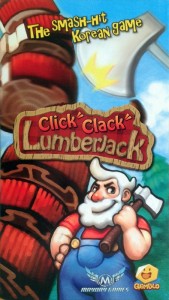 Jenga was a game that my sister and I played with frequently when we were kids. We had fun building the tower of blocks and waiting until one of us messed up to watch the whole thing come tumbling down. Click Clack Lumberjack from Mayday games gave me a nostalgic feeling when I first laid eyes on it. In this 2-7 player dexterity game, players take turns hitting a stack of trunk cores attempting to knock the bark off without knocking the whole thing down. If you have heard of the game Toc Toc Woodman from Korea, it is exactly the same game with just a new name. Will this filler game stand up with other dexterity games or will it fall quickly to the ground. Read on to find out!

The object of this game is to get as many points as possible. In the center of the table is a mighty tree that players are attempting to debark without cutting down the tree. Because the trunk is made up of different core pieces, they are able to shift around as players hit them with a plastic axe included in the game. If players are able to move the trunk cores far enough off center, the bark pieces will fall to the ground gaining them a point. If they knock the core of the tree off they get negative five points. The player who manages to knock of the most bark and avoids taking down the core will win the game.

The pieces for Click Clack Lumberjack are top notch. They are all made from very thick plastic and will stand up to many games and even the hardest of hitters. I like how the core trunk pieces has cuts to make it almost look like rings in the wood. Even the way that the bark is designed makes the finished stacked pieces look like an actual tree, minus the leaves of course. The quality of the components makes the game look very inviting to players and as realistic as you can with plastic pieces. Plus the game comes with a plastic axe, which I have caught my kids playing with on numerous occasions. Overall the components in Click Clack Lumberjack are well made and work perfectly for the game.

First thing for players to do is construct the tree. There are a total of 9 core pieces that allow for 4 piece of bark to slide in on the sides of each core piece. These combination core/bark pieces are all stacked on top of each other on the base trunk piece. On a players turn they take the axe and get two hits on the tree. When a player manages to get a bark piece or a trunk core to fall off they take that piece and put it in front of them. On four pieces of the bark there are small grubs that give the player an extra turn hitting the tree. Play will continue until all pieces of bark are off the trunk or the entire thing is on the table.  At that point, players will total up their gained pieces with bark, worth a point for each, and subtract five for each core piece and the player with the most points is the best lumberjack ever. That is it, the entire game in one short paragraph. That has to be some kind of a record. (Publisher’s Note: It is).

I had a lot of fun playing this game. The way that this game is designed makes this type of dexterity game quite different than anything else I have played. Instead of just trying to knock things down or trying to not make the structure fall, you are forced to skirt the line in the middle. By forcing players to use more finesse with their hits, it adds a lot of tension to the game. Every miss hit could cause most of the stack to fall on the ground. There are a lot of entertaining moments when players best laid plans go to waste. Because of that, people don’t turn away from the game. You don’t want to miss those. I do like how the game doesn’t end the first time that some of the core pieces fall. People laugh and continue on with the game. This helps to keep the game flow going.

I’m used to using my fingers in a game like this, but using the axe is a different experience. It takes some time to get used to the amount of force needed to move the cores around, however, once you get a few games in, it feels very natural. The axe, plus the design on the trunk core and bark pieces, also helps to connect the players to the theme. The game is a little intimidating out of the box, but within five minutes you can have your tree ready to go. I was amazed with the components that come in the game. They are extremely high quality with very thick pieces and when you complete the tree it just looks awesome.  If you were playing this at a party or with a large group, the game play and components will draw people to the game just wondering what you are playing.

This game also works quite well with kids. My oldest is a little young for this game, but she gets the idea and finds it fun. I think kids over 5 will have a blast with this game and so will their parents.

Final Score: 3.5 Stars – A uniquely designed dexterity that will be a joy to play with all age groups.

Misses:
• Can be challenging at first
• Players might dislike the lack of strategy