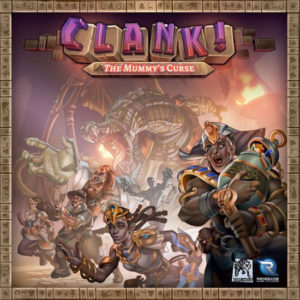 There’s a certain content pattern when open world or loot-based fantasy computer RPGs get released. Commonly, there’s a middle eastern, Persian, or exotic themed location in the desert that serves to break up the Euro-centric fantasy aesthetic. This gives designers a chance to stretch their use of the sand-colored side of the palette. Clank!, as a product, is not immune to this trend.

Clank!: The Mummy’s Curse is as much a test of a typist’s speed with punctuation on the keyboard as it is an expansion that is almost expected. The change in the core game with this expansion are subtle but noticeable, similar to the previous moisture-filled expansion. The big question is whether it’s enough for fans.

The title for Clank!: The Mummy’s Curse basically explains everything gamers want to know. There’s a mummy wandering around the dungeon, moving between 4 different dungeon sections. There are also curses. Each curse acquired by a player yields -2 victory points. Sometimes these curses are acquired from just moving, but also attacking the mummy grants a curse.

The real catch to the game is that attacking the mummy is generally very profitable, yielding 4 coins for only 2 swords (a net of 2 victory points after subtracting the curse, double what the goblin gives). However, each attack on the mummy also causes them to move to a different dungeon location. So, keeping up a sustained victory point generation also requires a lot of movement.

In addition to this mechanism, some new cards rely on curses or move the Mummy upon arrival in the card row. There are also two sides to the main board, with the more intriguing side shaped like a pyramid with dungeons below.

Finally, there are some additional major and minor secrets which cause the distribution to be a bit more random, which eliminates some tokens from the game by chance. This is also a welcome addition ensuring the game changes even more from play to play. And lastly, fans of the monkey idols also get a new one.

Devotees of Clank! don’t need to read any more. This is a tight, focused, and number crunch expansion that brings out the point tabulator in all players. It’s good, very good. The new mechanisms change play “just enough” while not burdening the game with too many new rules or complications that alter the core strategies.

This reviewer would shy away from saying it’s the best expansion yet for Clank! because fond memories of the water breathing challenges from the first expansion are still fresh. However, what can be said is that this is welcome for being different and challenging, much the same way Scoundrels of Skullport aided Lords of Waterdeep with the corruption mechanism.

There is only one negative, and it has to do with the art. Sometimes the character art on the cards varies from character to character such that you can never really tell if Clank! is after a steampunk, high fantasy, or pulp fantasy sort of theme. In this expansion, a couple of cards feature companion characters wearing clothes straight out of the 20th century. If this bothers the anachronism-averse, this is your warning.

Despite some picky highlights of card illustrations with clothing choices out of time, Clank!: The Mummy’s Curse is a good addition to the core game. It adds stuff that’s new while not overwhelming players with new rules. For fans of the game, it’s highly recommended. Although at times predictable as a theme, this Egyptian flavor of Clank! Expansion is one your mummy would approve of. If gamers aren’t keen on the Egyptian theme, Board Game Quest recommends you avoid our Top 10 Egyptian Themed Games article as well, because this expansion would have made the list.

Editor’s Note: Mummy puns in this article are solely the responsibility of Tahsin Shamma. We here at Board Game Quest have no responsibility for any such silliness.