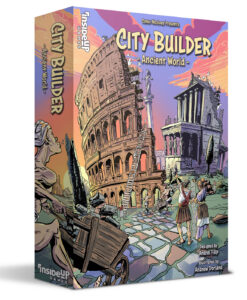 “Do you want to lay some tiles but want something a little meatier than Carcassonne?”

“Do you prefer cobblestone streets to dirt roads?”

“Do you want to replace the clean graphic design with so much clutter it gives Marie Kondo anxiety?”

“If you said yes to any of those questions then I have a game for you!”

City Builder Ancient World is a competitive, cooperative, and solo-able tile-laying game that has you building a city with tiles and populating it with commoners, nobles, and monuments to build the best (Ancient World) city in this quick-playing game designed by Andrei Filip.

City Builder Ancient World, which I incidentally keep typing Ancient World City Builder, typically plays over 18 rounds where you play a tile, add colored wooden buildings (settlers) or one or more rectangular tiles (called monuments), and then draw back up to three tiles.

The goal of the game is to expand your city by adding tiles lining up streets to complete districts with specific landmarks and rectangular shapes. One objective is to build a monument or empty houses and landmarks to add houses from the randomly populated settlement track. You and your neighbor can never empty a row which creates a race to the higher value, homes. Only the houses closest to you on either of the two settlement tracks nearest your city can be added to your city.

If you get enough features you may be able to place one of the larger McMansion homes of the nobles. And if there are enough symbols and houses you can mix and match nobles and riff-raff, I mean commoners, of different colors as each district can only have one building of each color.

While the houses score predictably based on the position they came from on the settler track, monuments are scored based on other features in your city. This might include victory points for each populated district adjacent to the monument or having districts with multiple settlers. Once all the tiles have been added to the cities, scores are tallied based on the empty spaces on the settlement tracks by each player and the effects of the monuments built. Highest score wins.

Set up can be clunky the first time as you navigate the wall of text set up and randomly draw houses, mansions, and finally monuments from the draw bag. I found this got much easier as I gained familiarity with the components and their locations in the box.

The game runs quite smoothly once it gets going giving players some choices but not a paralyzing array of them. The tiles look cluttered at first glance and the red, green, yellow, and blue Landmark symbols can sort of blend in with the cobblestone roads and buildings. That appearance overwhelmed me at first as I looked at the tiles and tried to understand what I was looking at. I still look at the tiny buildings and think they’re cobblestones.

Having a hand of tiles already moves this to Carcassonne+ in terms of having the ability to make strategic choices and plan ahead based on the tiles you have. Additionally, you can complete a district for a monument and then work on the rest of that monument’s requirements to fulfill it, unlike Carcassonne where you can only place a meeple on the tile you just played. This allows you to have big turns where you finish a district and populate it with several houses along the track and then cap it off with a monument or two. But luck will still be a factor based on the random draws on both the settlement tracks and the tiles drawn. With a limited variety of landmarks and wild statues, there are ample opportunities to feel clever by making things work against all odds.

Competitive focus on scoring the most points and that can be accomplished through a combination of building monuments and housing your population. You will always have two housing tracks to pick houses from and the three monuments available at a given time. Player interaction is limited to the race on each housing track for the highest value homes and the race to any of the available monuments on the table. There’s no option to march off to war against your neighboring city for snatching that monument you were working towards.

If you’re trying to avoid all conflict, or other people altogether, cooperative and solo modes are included. In both of those you’re trying to construct a set number of monuments out of the ones drawn randomly at the beginning of the game. These monuments have two sets of requirements with one being the features on the tiles, like in competitive mode, and the other is some other criteria in your city such as having a minimum population of 14 or the monument is surrounded by 4 populated districts.

Instead of drawing from the tile stack, there’s a common pool of three face up city tiles to draw from that allows the players to plan their upcoming moves together. Each player also has a single housing track with five positions. Each turn, you randomly draw a house from the draw bag, if you can’t place a house, the game ends. If the house drawn matches the color of the furthest back one on the track both are removed and replaced with a noble’s house.

These modes also add a twist with the Emperor’s edict which makes life more interesting/challenging by changing the rules either by placing a restriction or changing how the game is played. For example, one of the edicts has you only able to take settlers from the back of the track which made planning ahead challenging.

In the age of everything being something+, City Builder Ancient World is Carcassonne+ in that it offers more strategic depth to players. But this comes at a cost of some additional complexity and your mileage may vary if that’s right for you. To me, it’s kind of like a sequel movie that tries to one-up the original but doesn’t live up to it as the magic was in the purity of the initial one.

Hits:
• Separate Co-Op, Competitive, and solo play
• Carcassonne with more strategic depth
• Flexibility of when to add settlers and monuments can make for big turns

Misses:
• Pretty but overly busy visual appearance
• Luck can be a factor in the final outcome of a game