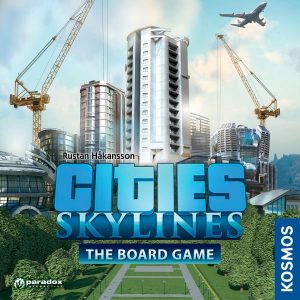 If you’ve never played it, Cities: Skylines is a video game publisher Paradox Interactive and it’s utterly fantastic. In fact, I’m completely unashamed to admit it that I have bought it twice (Steam, PS4) and will probably get it a third time for my Switch if it ever goes on a good enough sale. It’s easily one of my favorite city builders to ever be released.

But wait, I know what you are thinking, this is a board game site. What does that have to do with anything? That’s because publisher Thames and Kosmos has released Cities: Skylines – The Board Game. Designed by Rustan Håkansson (Nations, Tribes: Dawn of Humanity), this cooperative board game will have you and your fellow players trying to manage your city’s budget and resources to create the best sprawling metropolis the world has ever seen!

The goal in Cities: Skylines – The Board Game is to gain the highest score possible for your communal city. The core gameplay starts players out with four facedown city boards. Each player is also dealt a number of faceup cards based on the player count and the first player takes their turn.

On a player’s turn they must do one of three actions: Play a construction card, exchange a card, or end the milestone.

Construction cards come in a few flavors: Service buildings (police, fire, parks…), Utility Buildings (power, water, trash), or Zones (residential, commercial, industrial). To play a card, you must pay an associated cost: usually money or adjusting one of your 7 resources (power, water, trash, workers, pollution, traffic, and crime). Afterward, you place the appropriate polyomino tile on the game board. Some buildings give you rewards based on where you placed it (IE: next to a school, in the same zone as a park, etc…). Rewards will come in the form of money, resources, or happiness. Happiness is basically the victory points of the game. After that, you draw a card from one of the three decks and the next player takes their turn.

Should you not want to play a card, you can exchange a card as an action by paying two money. Cards go next to the draw piles and may be taken back as a draw during a later turn.

If you have a building in every district, you can end the milestone. When this happens, players first lose happiness for each negative value of power, water, and trash. They then bank their current happiness amount to the main tracker board. Players must then pay $1 for each step away from zero the worker track is at. Finally, they must buy a new land parcel on an adjacent city board, flipping it over.

Those are the main parts of the game. There are also four modules, with a new one added after each subsequent play (or you can just use them all from the start).

The game ends in a loss when a player can’t take an action on their turn, a cost needs to be paid and there is no money in the treasury, or if the happiness track ever bottoms out.

Players can end the game when there are at least two buildings in each district and all city boards are revealed. They then finish the milestone scoring and total up their points. There is a chart they can compare their score to see how they did.

There are some games that you play it once, and you think it’s just kind of OK, but after each subsequent play, you like the game more and more as you wrap your head around its strategies. Unfortunately for me, Cities: Skylines: The Board Game had the opposite effect. I enjoyed my first play quite a bit, but as I played it more and more, I liked the game a lot less.

The main issue I ran into with Cities: Skylines: The Board Game is the randomness. In the game, you are a slave to the card draws. There are three different decks you can pull from, and there is some logic to which deck you should be drawing. Stage 3 cards cost a lot of money, Stage 1 cards, are cheap, but not very powerful. The problem arises with trying to manage your resources.

For example, in one of my games, I lost about halfway through because I had no access to power. That resource just bottomed out and, try as I might, I just couldn’t find a power card. There are only 3 buildings that provide power (and two policies), and over 100 cards in the game. I’ll let someone else do the math, but with those break downs, it becomes a crapshoot if you will ever get the card you need at the right time.

And that’s where Cities: Skylines: The Board Game breaks down for me. The lack of player agency. If the decks were shuffled in a way that certain resources were all at the bottom of a deck, you’ve basically lost the game before you’ve even started, which is extremely frustrating for a game you could have just spent 60+ minutes on. Oh, I should also mention that the playtime on the box is woefully optimistic.

But if you can get around the inherent randomness in the game, there is fun to be had here. Cities: Skylines: The Board Game feels more like a puzzle than a game, an optimization excursive where players need to work out the best time to play the best card. If you play your library first, I can then play this residential zone that will trigger +2 happiness. And If I put the zone in this district, it will all you to play your commercial zone that wants to be near two residential…

However, here there is also somewhat of a lack of variety. The service and utility cards all are pretty much the same: Pay money, gain X resource. The Zone cards, while diverse, all kind of do the same thing. Pay these resources, if you can place it next to the right building, you get a bonus. This almost drops the game on rails as the choice of what card to play is usually somewhat obvious. Always (almost) play the card that gets you a bonus.

I think Cities: Skylines: The Board Game makes a decent family game. Something you can play with your kids and enjoy working together to build the best city possible. But gamers are going to be frustrated by the lack of player agency and feel like that the game plays them a little bit. The other thing I should note is that because card play is so crucial here, Cities: Skylines: The Board Game can be prone to “quarterbacking”. If that can be an issue with your gaming group, be warned.

As much as I wanted to give Cities: Skylines: The Board Game a glowing review based on my love of the video game. I found myself just getting frustrated with it. When the cards fall your way, the game can be a lot of fun. But there is an equal chance that you will sit there, fuming as you keep drawing cards that are no help for your current situation.

Final Score: 2.5 Stars – A game that definitely breaks new ground in the city building genre but is held back its inherent randomness.

Hits:
• Feels unique for a city builder
• Would make a good family game

Misses:
• The random card draws can make or break the game
• Outside of the unique buildings, the rest of them lack variety
• Gameplay can feel on rails
• Playtime is a lot longer than what’s listed