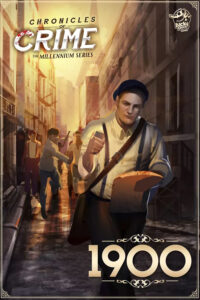 Let’s set the stage, shall we? The year is 1900 and you’re Victor Lavel, an intrepid reporter in Paris, covering all the important local events for the Les Nouvelles Paris newspaper. But you’re also an amateur sleuth, one whom the police in town seem to rely on to solve crimes they’re investigating. Doesn’t really say much for the detectives of 1900 Paris, does it?

That’s the premise for Lucky Duck Games’s Chronicles of Crime: 1900, the second installment of the franchise’s Millennium Series. In this game of murder and intrigue, plenty of things other than the lede will be buried.

Like every game in the series, gameplay in Chronicles of Crime: 1900 is dependent on a free mobile app that will guide you through the mystery at the heart of each scenario. Using the app, you will scan unique QR codes on location boards and then interview people you meet by scanning their specific QR codes. You can then ask these people anything you want, so long as it’s about the information you’ve previously acquired in your investigation. The order in which you ask questions might even change their answers. (I have a bad habit of immediately asking each person about the victim or aggrieved party in each scenario, which usually puts everyone in a really bad mood.)

All the currently released scenarios also have at least one location you can inspect using your phone as a VR interface. Players can move the phone to look around the space and see objects and clues around the room that might aid them in their investigation. The things you see might include pictures of additional characters, weapons, or items. Sometimes these things won’t necessarily be a specific clue, but rather something with significance players will need to infer.

In the same way its Millennium Series predecessor 1400 introduced vision cards, 1900 has puzzle cards that will both aid and complicate the scenarios. These puzzles need to be deciphered to advance the cases. Luckily, your friend and coworker at the newspaper writes the puzzles for each edition and she will be the main point of contact if you need help along the way. Unlike the original Chronicles of Crime where there were multiple people offering help at your home location, puzzle-writer Charlotte is typically the only person willing to help you in 1900.

It’s difficult to explain anything specific about the puzzles themselves, but in the tutorial, players locate both an item and a cypher and must discern a solution by combining them. These interactions become more complex as the scenarios progress. (At the time of this writing, there are four official scenarios available to play on the app, not counting the tutorial.)

There aren’t many traditional mechanics to speak of and players are only limited by their imaginations in how they pursue these mysteries. (They’re also limited by the game’s clock, of course, represented by frequent text prompts from your editor telling you to hurry up. Speaking as a journalist, this was all too real.)

That’s as far as one can really go into the mechanics of Chronicles of Crime: 1900 before spoiling the scenarios. Each scenario has a time limit for players to gather their evidence and solve the mystery. You’ll then be scored based on how much accurate information you’ve gathered throughout your investigation.

The best parts of these games are the moments when a suspicion you have is confirmed by a successful line of questioning. “Ah-ha!” I usually shout after one of my theories turns out to be correct. (This doesn’t happen a whole lot; most often I find myself yelling, “Seriously? That’s what happened?”) Even when you learn information through the normal course of questioning, it’s still rewarding since you’ll feel as though you’ve actually put in the work to get there.

Conversely, there’s frustration when you aggravate one of the people you’re investigating and therefore can’t get the information you need from them. This tension might seem arbitrary, but it adds another layer to the things players need to consider when organizing their information. Do we ask about this suspicious object immediately or wait until this person brings it up themselves?

Chronicles of Crime: 1900’s puzzles bring these moments to a whole new level. Successfully figuring out the puzzles is easily the most satisfying aspect of this entry in the series. They’re also a new mystery for players to solve collectively, adding to the interaction in an interesting way. Since the information you glean from the puzzles is often necessary to understanding the entire scenario, they can’t simply be ignored in favor of further questioning or searches. The puzzles are challenging without ever feeling intentionally obtuse, and by the time you solve the case, it all makes sense.

There’s also a continuing story element since the character players embody here is a descendant of the knight character in 1400. The family line continues in the Millennium Series third entry, Chronicles of Crime: 2400, which is physically available, but doesn’t have any app supported content yet. This is a fun gimmick but also not necessary to enjoy 1900 on its own.

For me, one of the most enticing parts of Chronicles of Crime: 1900 is that players take on the role of a journalist as opposed to a police officer in the original or a knight in 1400. Maybe this is a personal quirk, but I can really relate to the pressure of working on a deadline while your editor hounds you to finish something you’re writing. (Sadly, this is something I’m dealing with even as I type this. I’m almost done, Boss. Just a few more paragraphs and this will be ready to publish.)

Regardless of its realistic interpretation of editor/writer relations, this slight change in the investigative dynamic is a lot of fun. Since I prefer to play the Chronicles of Crime games solo, I actually felt like a reporter hunting down leads on my own, which was gratifying. At higher player counts, however, the game is equally engaging as everyone offers their own theories on the cases and puzzles.

As an entry point to the series, 1900 is probably a bit on the advanced side but for fans of any of the previous content, this is a can’t-miss option regardless of player count.

Final Score: 4 Stars – Chronicles of Crime: 1900 builds upon an already innovative game system to create a worthy and enjoyable entry in the franchise.

Misses:
• As with all games in the series it barely exists as a “board” game