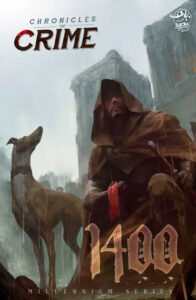 In 2018, Lucky Duck Games released Chronicles of Crime. This app-assisted experience has players taking the role of a detective investigating a crime and trying to catch the bad guys. In the years since a few expansions have been released adding more cases and moving around the locations and time period.

Today we are looking at the first new stand-alone game in the series, Chronicles of Crime: 1400. As you might guess, this one is set in the middle ages and introduced a few new gameplay elements.

You are no longer a hardboiled detective. Instead, you are a knight in the city of Paris. And for your whole life, you’ve experienced prophetic dreams showing events that have happened or may happen in the future. These dreams are part of the key to your success investigating crimes for the King. That and your trusty dog who is always by your side.

If you’ve played the original Chronicles of Crime the experience here will be very similar. You will need the digital app and you’ll select a case to start off with. You’ll get an introduction to the crime and then it’s up to you what you want to do. Each location, person, and item has a QR code. You can scan a person’s code to interview them and then scan the codes of other people or items to see if they know anything relevant about them. Scanning a location will move you there, maybe finding additional clues. All of these interviews and traveling use up time though and as time passes people will move around and the situation around you can change.

The app will also occasionally let you search a room in a sort of alternate reality mode. You can take cards matching the items you see and use them are part of your interrogations.

Since this is the 1400s you don’t have a team of medical experts and crime scene investigators to help you out. Instead, you have a monk, merchant, and spy who are experts on certain types of information that you can go to for help if needed. And your aforementioned dog can sniff an item and possibly lead you to a person or place where that item has been.

Once you feel like you have figured out whodunit you can attempt to solve the crime. You’ll be asked a series of questions and given a score based on how correct you were.

Are you one of those people who just loves to listen to true crime podcasts or watch murder mystery movies? Then I can’t imagine you not enjoying what Chronicles of Crime has to offer. And this Middle Ages version is just more good stuff. I don’t necessarily think it’s better or worse than the original, but the new mechanisms, setting, and location definitely give things a new coat of paint on what was already a fun system.

There are four cases included in the 1400 box and each one is enjoyable in its own way. The cases are extremely well written and introduce a fun cast of characters each time. The vision cards you get for each case can be extremely helpful in trying to piece together which person knows about what items and are instrumental in guiding you to the solutions.

There are a few instances where you can kind of be stuck and now know what to do next, which can be frustrating. After flailing around a bit and just asking everyone you can find about anything you know you’ll eventually get pointed in the right direction. The final case is especially prone to this as it seemed a little less intuitive than the others.

Chronicles of Crime really is best experienced as a solo or 2-player game though. There isn’t a lot for multiple people to do. This isn’t an escape-room-like game where you can split puzzles between different folks. There is really just one detective here and the group can decide on your actions together. But if as a way to pass some time alone or with a partner it works perfectly.

Board games with app-integration have been an on-again, off-again debate among some in the hobby. But Chronicles of Crime: 1400 was one of the first to do it well and they continue to do so. The app is one hundred percent required to make this type of game work but it does it perfectly. It gives you the feeling of an open world where you can go to any location and ask anyone about whatever you want.

The four cases included here are a worthy addition to your Chronicles collection. If you don’t have any of the previous games it’s a perfectly good place to start if the setting seems more interesting to you and a modern-day detective.

Final Score: 4 Stars – Love the setting. More crimes to solve. A puppy to help you out.

Hits:
• New vision cards and characters to help you along the way are a great addition to the game.
• Crimes are well written and the app works flawlessly.

Misses:
• Getting stuck can be frustrating without an easy way out.
• Really only works for 1-2 players.