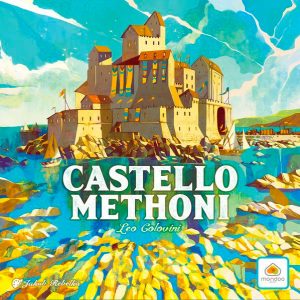 I am on a mostly-exclusive hunt for games by Asian designers and/or publishers but this game, in particular, was a surprising choice because of its European setting and logistics strategies. Cool villas, towers, walls, and art made me look at the game but the description of gameplay got me to open the box.

Castello Methoni is an area influence and enclosure game for 3 to 5 players that takes about 30-60 minutes to play. The best experience is with 5 players for more opportunities to rework control and analyze investments.

Enclosure, as you can imagine, means walls and lots of them. Depending on the number of players, a corresponding number of walls will be available which also affects the length of the game. Specific areas of the board are incentivized by ducat (the in-game currency), and players thankfully start with some. This game is kind enough to also provide some direction through an objective card but the rest is truly up to you and the constantly changing conditions with your opponents.

On your turn, you may play up to 2 cards from your hand to build and/or trade.

Building involves matching the land type to the card, setting a wall, and populating both sides of the wall with a house. The catch: one of those houses has to be a house from the player who takes their turn before you (on your right) or after you (on your left). So populate carefully, especially because components are limited—no substitutions are allowed. This phase can also trigger other events in the game like claiming a domain after a full enclosure is completed, which requires lots of ducat upfront. It can even involve annexing if enclosing land adjacent to other domains, and switching out towers which mark who owns the domain.

Trading to receive 2 ducats requires that you have either a market card or a land card that matches a market space of the board that contains a tower (i.e. the market space has been integrated into a domain). However, there are only six of these cards in the entire sixty-card deck so this will be a rare choice.

When a player takes the last wall from the supply, the game ends at the end of their turn. Then, your score total is based on the size of the domains you control, remaining ducat, progress on your objective card, who has the largest domain and finally points scaled off of how many of your towers are on the board.

Player count has a major impact on this game such that the strategy and experience can make it feel like another game entirely. For example, at 3 players it felt like a race, while at 5 players there was a strong feeling of suspicion and forecasting that drove the actions.

In the past, I’ve appreciated the existence of objective cards when playing a game for the first time, but when reviewing what combinations existed, it seemed difficult to really follow and even when done efficiently, the math was just not in your favor for points.

While the game does provide an action on your turn to improve your purchasing power, the ratio of market cards to the rest of the deck made it unreasonable to focus on it. This was especially true when playing with three players; a few times during the game we wished we could scale down the deck because we certainly were not at all close to getting to those cards.

When searching for lucrative moves, I did notice that focusing efforts on one area at a time to claim or annex had the best rewards. It also makes sense thematically that you would not want to be vulnerable by spreading yourself thin, and I personally made that mistake my first time playing. The better way to go was to amass wealth in a small area of the world to try and gather more influence. When a game is component limited, that seems to be the trend and Castello Methoni is no different.

There is a secondary element of investment in this game because you cannot add houses into a sector without being able to build a wall into it. So there is a clear point of “that will never happen” when calculating the availability of upgrades to villas or planning takeovers. That mechanic easily set this game apart for me; the requirement to place the house of an opponent on the other side of the wall in order to start the plans you have is a refreshing twist. In this case, it can serve the purpose of both 1) reducing the future expansion and capabilities of your opponent and 2) incentivizing them to maybe start investing or expanding into other areas near you.

Even the process of choosing whether it’s the person that takes a turn before you versus after you is interesting. You can use it as an opportunity to calculate the time you have to pivot from an original idea you had or to force them to back out of plans you’re seeing them build on. In this sense, there is a bit of trying to guess at what your opponents will do, when you would get an opportunity to push your own agenda and how you could get them to comply without them knowing it (and it being too late for them to turn back).

The gameplay is deeper with every session and consideration once you reach the muscle memory of a turn. The turn, however, is not all that there is to the game; if you want to you can make it about much more. This is where it’s important to pick who you play with. Understandably and regrettably we don’t all have that luxury so you may only get to scratch the surface of this game.

If you are used to focusing on positioning in area control games, you’ll have opportunities to do a lot of it in Castello Methoni. Building walls force the players into benefiting not only themselves but potentially others. The real depth of the game is navigating how your plans could unfold and the ripple effects of manipulating your neighbors. Knowing what you can or can’t afford because of the actions you took in prior rounds rewards those who understand their purchasing power. Everything is balance and timing, so Castello Methoni is for those who love to hide their plans for world domination through absorption and buyout of their opponents.

Final Score: 3.5 Stars – Manipulate your opponents to bolster your future claims to the land, position yourself for an advantageous annex and increase the value of your empire in this area enclosure game.

Hits:
• Delayed fusion is a new take on area control
• Limited components induce conflict
• Easy to teach and get playing