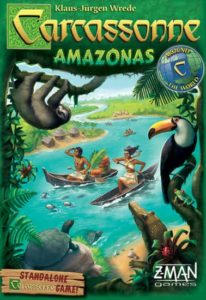 The Carcassonne: Around the World line of games typically uses some standard Carcassonne rules, but integrates a variant or expansion out of the box to deliver an experience that exemplifies a particular time and place. The previous two offerings, South Seas (review here) and Gold Rush, explored the South Pacific in the time of colonialism and the American west of roughly the same era. These previous two games, even while retaining the Carcassonne name, offered very different experiences. Once again, a new version seeks to cement a memorable place with “Carc” fans.

Carcassonne: Amazonas is a tile-laying game for 2-5 players. It takes between 35 minutes to 1 hour to play. It plays best with 2 or 3 players.

A boat race along a pre-Columbian Amazon is the setting for this version of Carcassonne. As players place tiles and use meeples to claim locations, they will also be moving a boat down the great Amazon river with the aim of scoring enough points from villages, tributaries, jungles with animals, and maintaining a lead in a river race.

The meeples, wooden huts for camps and cardboard tiles are of the same high quality to be expected from Carcassonne games. The standout pieces are the wooden boats which feel like appropriate models for the Amazon river.

The art for the tiles, however, is outstanding. It delivers a wonderfully artistic and cute jungle experience. The animals are appropriate and very thematic.

Standard Carcassonne has players selecting tiles from a random stack and then placing the tile, aligning it with other tiles already placed. If a player already has a meeple or places a meeple on a completed terrain feature, points are scored.

In this version of Carcassonne, players are completing terrain features such as villages (cities), tributaries (roads), and jungles (farms). The only pieces allowed in jungles are the wooden hut tokens, so players are limited to two jungles for farm points.

The big difference for this version is the boat racing on the Amazon. As players complete tributaries or forego placing meeples, they can move their boat down the river. Every so often, an Amazon river tile is drawn which must extend the main river. It also triggers a scoring for the farthest boat on the river.

Players continue placing tiles and wooden tokens until all tiles have been placed. A final scoring takes place and the player with the most points at the end of the game wins.

With each version of the Around the World series, Carcassonne gets a new vision. Each has a flavor that asks to be loved on its own. While this version of Carc does have the look, it lacks the razor edge of previous versions. While functional and potentially interesting, the racing mechanism as implemented isn’t as engaging as it could be.

An easy first compliment to this game is to mention the implementation of the theme. The wooden pieces and overall aesthetic are extremely well done. It’s easy to forget that Carcassonne: Amazonas is a game based on a medieval French city as players complete villages and add river tiles with caimans and piranhas.

Unfortunately, the main mechanisms that make this version of Carcassonne unique are also less than impressive.

The first modification is the change in farming. The huts, which are placed to gain points from the number of animals, is not a new feature to the Carcassonne system. Other versions have used something similar including its immediate predecessor, Carcassonne: Gold Rush. It’s welcome, but not revolutionary. On the lighter side, you won’t find another board game that features capybaras.

The second modification is the featured mechanism of the game. The boat race down the Amazon combines elements of the original “The River” expansion alongside a token-on-a-track mechanism. This sounds like a perfect marriage, but the rules about moving boats causes it to fall flat.

Adding a tributary tile with a boat symbol to a tributary a player owns causes that player’s boat to move. This is always one space, so grand jumps ahead are not to be seen.

A boat also moves when a player does not place a meeple or hut into the terrain. An auto-move like this serves to keep the tension in the race, but really does not engage players. Attention in the game diverges between the two mechanisms and what could have been a tight challenge from player choice is unfortunately driven more by luck of the draw. Unlike other terrain features, there’s little spreading out of risk here.

The other real let-down in the game is the woefully inadequate points for the race and lack of tension at the end of the game. In other race mechanisms, winning is tantamount to winning the game. Here, a meager six points is to be gained from the overall race. An equal number of points can easily be obtained from a small village (city). Likewise, since the boat race scores every few turns, there’s really no ratcheting of tension with the race turn by turn.

Carcassonne: Amazonas, is a fine game. It has adequate, fun play, but it just barely eeks itself into the “good” game score range. It’s not boring, but the boat race leaves a lot to be desired. The other features in the game are extremely well done cosmetic changes and tried-and-true adaptations to farming.

Fans of Carcassonne should acquire Amazonas just for the theme alone, but gamers looking for the most engaging version of the Around the World series should take a look at the other titles first.

If you’d like to get a copy of Carcassonne: Amazonas, you can pick it up for about $27.

Final Score: 3 Stars – Even with wonderful art and a race mechanism unique to this version, it lacks the depth or high engagement of the previous versions from the Around the World series.