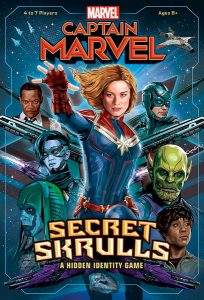 Skrulls – they could be anyone. A little old lady walking her dog. That kid riding her skateboard down the street. Maybe even your Uber driver. Captain Marvel and her allies are teaming up to defeat the Skrull menace. In the meantime, the Skrulls are secretly trying to infiltrate society and eliminate Marvel and her friends. Who will win this superhero sized battle?

Based on the game mechanics of the wild west card game, BANG!, Captain Marvel: Secret Skrulls is a secret identity, elimination game for 4-7 players that takes about 30 minutes to play.

Different identities have different objectives. Captain Marvel and her allies are tasked with defeating all Skrull. Skrulls are attempting to defeat Captain Marvel. And the defector Skrull is hoping to defeat everyone and be the last person standing.

At the start of each turn, the active player draws two cards. Playing cards consist of two types of cards – red instant actions that are played and discarded, and blue equipment cards that remain in play. Players can play any number of cards but may only attack once. At the end of their turn, the player discards to their hand limit.

Players remain in the game until they lose all of their health. When a player loses their last health token, they may immediately play a Heal to survive. Otherwise, they are eliminated, and they reveal their Alliance card. This will help the remaining players narrow down the roles of the others left, and narrow down their targets left to eliminate for victory. The game ends when either Captain Marvel is eliminated, or if the Skrulls and Skrull Defector are eliminated.

I’m generally wary of IP based games, particularly when they’re pasted onto an existing game. Captain Marvel is actually a fun take on Bang!, the theme fits the genre, and it will likely create some new fans of hidden identity games.

One thing I like in particular about these type iterations of secret identity games – more available actions. There are few things more frustrating than sitting around, knowing X player is the spy/werewolf/traitor and having to vote round after round to hopefully knock them out. In Secret Skrulls, you have direct action in order to help save your side.

However, I do think that the player cards could come with a little more info. The rulebook has a list of card clarifications, but these would be more helpful on the cards themselves – it’s a little immersion breaking and potentially character-revealing to have to stop and read rules of interaction midturn.

Player elimination is also a turn off when you’re playing with friends – no one wants to be the one sitting, watching everyone else play. I’d like to see a game in this genre figure out a way for the eliminated folks to continue to participate in a meaningful but perhaps somewhat lessened way.

The gameplay is much more exciting at higher player counts. While it’s absolutely acceptable, and maybe preferable to some, to play an army of one, it’s more fun and seemingly more in the spirit of the game to play with more players. Is your neighbor an ally? An enemy? What about the player across the table? There’s more depth to the intrigue at higher player counts.

I found the art/graphic design to be somewhat lackluster, which is a shame. It’s really apparent that it’s cashing in on the popularity of the movie, which I entirely get, BUT, I think they lost an opportunity to get some really cool original work and make this more visually interesting. Check out the rows and rows (and rows) of original art based on geekdom at your local convention – fans generally enjoy fresh new interpretations of the things they love.

Captain Marvel: Secret Skrulls is one of the more interesting versions of hidden identity, losing none of its charm being skinned with a popular superhero. The ability to take direct actions will excite those who grow frustrated with voting type games in the genre. However, The Op missed the boat on making this more eye-catching by giving Captain Marvel Secret Skrulls some more eye-catching art and design.

Hits:
• Direct actions make you feel in control of the game
• Lots of player interaction at higher player counts
• Nice update of the theme with a genre-appropriate IP